Lt. Col. Alexander Vindman, who works at the White House National Security Council, said he listened in on the call between President Donald Trump and Ukraine's president and was so disturbed that he reported his concerns to the NSC's legal counsel 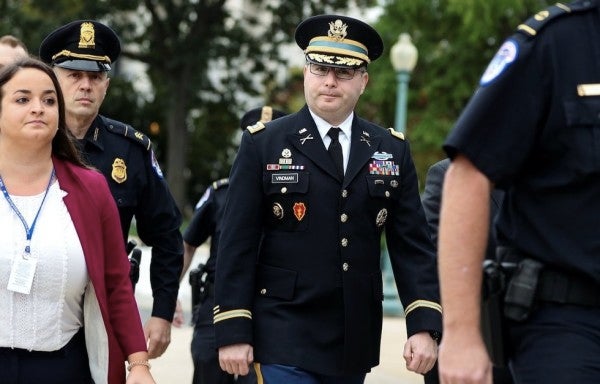 WASHINGTON — A U.S. Army officer who works at the White House National Security Council said he listened in on the call between President Donald Trump and Ukraine's president and was so disturbed by the content that he reported his concerns to the NSC's legal counsel.

Lt. Col. Alexander Vindman said in a statement prepared for the House impeachment inquiry that the call was just one of the instances he witnessed in which Trump administration officials repeatedly conditioned aid to Ukraine on that country agreeing to investigate former Vice President Joe Biden.

His statement corroborates the complaint made by a whistle-blower in the intelligence community, whom Trump has repeatedly sought to discredit and dismiss. Vindman's testimony is scheduled to be delivered Tuesday to the three House committees leading an impeachment inquiry of Trump and provides a key piece of evidence from someone with first-hand knowledge of the events being investigated.

Lt. Col. Alexander Vindman, director of European affairs at the National Security Council, arrives at the Capitol for his deposition as part of the House's impeachment inquiry on Tuesday, Oct. 29, 2019
(CQ Roll Call/Bill Clark via Associated Press)

Vindman said the first time he contacted an NSC lawyer was after Gordon Sondland, the U.S. ambassador to the European Union, told Ukrainian officials at a meeting that their country had to pledge “specific investigations” in order to secure a meeting between Volodymyr Zelenskiy and Trump.

Vindman said he told Sondland that “his statements were inappropriate.”

Vindman said he was in the White House Situation Room when the Trump-Zelenskiy call took place. However he said he never had direct contact or communication with the president.

“As the transcript is in the public record, we are all aware of what was said,” Vindman said of the phone call. “I was concerned by the call. I did not think it was proper to demand that a foreign government investigate a U.S. citizen, and I was worried about the implications for the U.S. government's support of Ukraine.”

In his statement, Vindman says he is not the whistle-blower who brought this issue to the intelligence community's inspector general.

Vindman's been in the Army for more than 20 years and is an Iraq combat veteran. Since 2008 he's been an officer specializing in Eurasia, with tours at U.S. embassies in Kyiv and Moscow. “I have dedicated my entire professional life to the United States of America,” he said in his statement.