“That was the greatest and finest moment of my life,” Adolf Hitler reportedly said after touring the newly Nazi-occupied French... 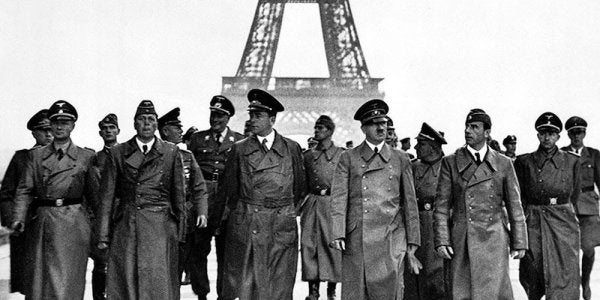 “That was the greatest and finest moment of my life,” Adolf Hitler reportedly said after touring the newly Nazi-occupied French capital.

The day after Germany signed an armistice with France, Hitler and his cronies toured the Dôme des Invalides which holds Napoleon's tomb, the Paris opera house, Champs-Elysees, Arc de Triomphe, Sacre Coeur, and the Eiffel Tower on June 23, 1940.

In all, Hitler spent three hours in the “City of Light,” but spent four years occupying northern France until Allied Forces liberated Paris, 73 years ago on Aug. 25, 1944.

“The Germans were driven from many strategic parts of the city by the combined onslaught of the French military and the fury of citizens fighting for their liberties,” the Associated Press reports.

Adolf Hitler stands in front of the Eiffel Tower at Place du Trocadéro, on June 23, 1940

During Hitler's brief tour, he instructed friend and architect Albert Speer to take note of the city's design to recreate similar yet superior German buildings.

“But Berlin must be far more beautiful. When we are finished in Berlin, Paris will only be a shadow.”

While sightseeing, Hitler also ordered the destruction of two French World War I monuments that reminded him of Germany's bitter defeat.