In a letter to lawmakers this month, Defense Secretary Mark Esper said he believes Sgt. 1st Class Alwyn Cashe deserves the Medal of Honor, and he'll work to approve it — although there will be a few final hurdles to overcome before the process is complete 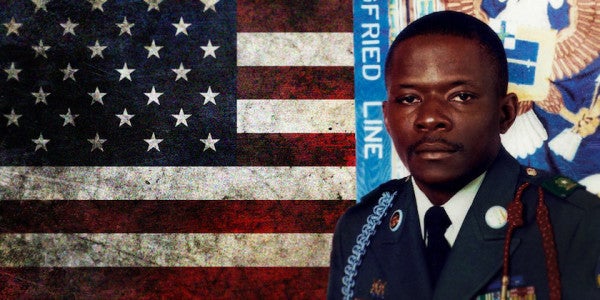 A yearslong push to award the military's highest valor medal to a soldier who entered a burning Bradley fighting vehicle multiple times to pull comrades to safety has just received a major shot in the arm.

In a letter to lawmakers this month, Defense Secretary Mark Esper said he believes Sgt. 1st Class Alwyn Cashe deserves the Medal of Honor, and he'll work to approve it — although there will be a few final hurdles to overcome before the process is complete.

“After giving the nomination careful consideration, I agree that SFC Cashe’s actions merit award of the Medal of Honor,” Esper wrote.

Esper's letter came in response to a plea from three lawmakers, all military veterans: Reps. Stephanie Murphy, D-Florida; Dan Crenshaw, R-Texas; and Michael Waltz, R-Florida. Cashe was a Florida native, and his family still lives in the state.

Cashe, a 35-year-old infantryman who died Nov. 8, 2005 of catastrophic burns he sustained during the heroic rescue effort in Samara, Iraq, has long been championed as one of the most deserving heroes of the post-9/11 conflicts to be passed over for the Medal of Honor.

On Oct. 17, 2005, he pulled all six of his soldiers out of the burning vehicle, despite his fuel-soaked uniform, which ignited as he entered the Bradley again and again. Three of the soldiers would later die of their burns. Cashe posthumously received the Silver Star, the third-highest valor award, for his act of heroism.

Many were surprised when Cashe did not receive a Medal of Honor upgrade during a three-year Pentagon-wide review of valor awards for the post-9/11 conflicts. Roughly 60 award upgrades were approved as a result of the review, including a half-dozen Medals of Honor.

Doug Sterner, the creator of the Hall of Valor database of military awards, told Military.com in April 2019 that Cashe needed to be on the list.

“It's the most perfect example of a Medal of Honor I've ever seen,” Sterner said at the time. “If the review is done and Alwyn Cashe hasn't been awarded the Medal of Honor, I won't be a happy camper.”

Kasinal White, Cashe's older sister, told Military.com that she received the news of Esper's decision yesterday — on her 62nd birthday.

“I was thinking, I can't scream right now, or someone will call the cops,” she said, of getting the phone call. “It was the best birthday present I could get.”

White, of Tallahassee, said she has worked tirelessly over the last 15 years to see Cashe awarded the Medal of Honor “because of our last name,” and their family's legacy.

“My dad, he was a poor boy from the projects who made good. We hailed from the projects of Seminole County,” she said. “My dad never finished high school, but all his daughters have at least one college degree, and all sons represented in the military.”

Cashe, one of nine siblings, never turned down a challenge.

“It was no surprise to anybody when he went into the Army,” White said. “It was like, 'Are they ready for you?'”

Murphy, Crenshaw and Waltz first wrote Esper in October 2019 — 14 years after Cashe's death — calling for the SecDef to review his case.

“Each of us proudly served in the United States military or worked at the Department of Defense,” they said at the time. “In addition, each of us cares about the process our nation uses to award medals for military valor, believing this process should satisfy the most rigorous standards of independence and integrity.”

Murphy is a former Defense Department National Security Specialist. Crenshaw served as a SEAL officer and Waltz is an Army Green Beret officer who rose to the rank of lieutenant colonel.

Cashe also has powerful supporters within the military. Lt. Gen. Gary Brito, who this month became the Army's deputy chief of staff, G-13, was Cashe's battalion commander in Iraq. He has advocated on behalf of the fallen soldier in the past, writing in 2014 that “You don't often find truly selfless sacrifice where someone put his soldiers' welfare before his own.”

The regulations surrounding Medal of Honor awards may present their own hurdles, however. The rules stipulate that the medal must be approved within five years of the act of valor, absent a waiver from Congress. While Congress broadly approved such a waiver in the 2017 National Defense Authorization Act to assist the Defense Department's upgrade review process, it expired at the end of 2019.

White said she understands the new waiver has the support it needs on Capitol Hill.

When Cashe's award package is finally approved, she said, “Oh my God, there is going to be a party, the likes of which you have never seen before.”