America Could Be In Afghanistan For Another 16 Years

American forces could still be in Afghanistan sixteen years from now—or even generations from now—under the White House’s current strategy... 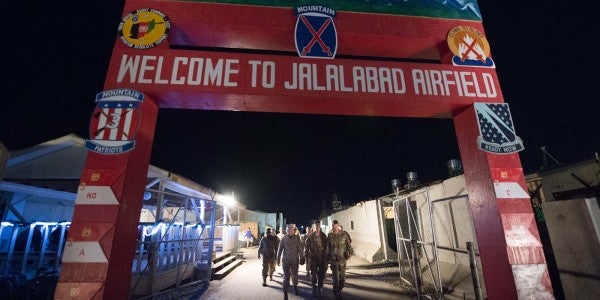 American forces could still be in Afghanistan sixteen years from now—or even generations from now—under the White House’s current strategy of maintaining an open-ended commitment to that war-torn nation.

“I think we will be there in sixteen years,” retired U.S. Marine Corps Gen. John Allen told an audience at the Center for the National Interest during a lunch-time discussion on Sept. 13. “But I don’t think this is a sixteen-year loss on our part.”

Allen said that American forces in Afghanistan could be “holding the line” indefinitely into the future under President Donald Trump’s new strategy. The United States drew down its forces very quickly during the waning days of the Obama administration, which inevitably led to the current state of affairs in Afghanistan. “President Trump has removed the end date and has given us an end state,” Allen said. “With this president committed to an outcome that is whatever he calls winning…then I think we can hold the line at the security level.”

Holding the line at the security level would allow the Afghans to develop greater capacity in governance and greater capacity in economic development. “If we can get those two going—where we’re holding the line at the security level—and we’ve got a chance,” Allen said. “So we may well be there for another sixteen years, we’ve been in Kosovo for a very long time. We’ve had troops in the Sinai for a generation.”

Allen also noted that the United States has been in the Republic of Korea and Japan for decades to “win the peace.” It took decades for South Korea to emerge from military rule and an extreme level of corruption as a fully functional democracy, but it eventually did thanks to the presence of American forces. Afghanistan might never become a fully-fledged democracy, but Allen argues that the only option is to stay the course. The alternative is to see the collapse of the Afghan government and the reemergence of an Islamic fundamentalist state. “I think the alternatives are just obvious in this regard,” Allen said.

Amb. James Dobbins, a senior fellow at the RAND Corporation—who was also speaking during the panel—agreed with Allen’s assessment. Dobbins noted that that President Trump has approved for Afghanistan measures that were originally recommended to President Barack Obama in 2014. While Obama believed that the situation was hopeless and chose to withdraw, Trump has chosen to double down on winning a victory in Afghanistan, at least as he definines it.

Trump has put his own stamp on the Afghan mission, defining “victory” as “crushing Al Qaeda” and preventing the Taliban from gaining control of that country rather than by building a successful democracy, Dobbins said. Though Trump is averse to nation building, he is continuing the policy of strengthening Afghanistan’s institutions, economy and stamping out corruption. “So there is an element of continuity there,” Dobbins added.

Dobbins noted that while Trump himself has sounded skeptical about reaching some sort of peace deal in Afghanistan, reconciliation with the Taliban is essentially the centerpiece of American policy in that nation. That is partly out of necessity to retain the commitment of America’s European allies, but it is also the only exit strategy the United States has in Afghanistan. “That really only gives you one exit strategy, and the exit strategy is some kind of negotiated settlement,” Dobbins said.

Dobbins said that such a peace settlement is a long ways off—as Allen also noted. Meanwhile, Russia and Iran also have a stake in Afghanistan and will necessarily have to play a role when a settlement does start to emerge in the future. But Russia especially, has never been comfortable with the American presence in the region, Thomas Graham, managing director of Kissinger Associates, said during his part of the presentation.

Moscow was initially pleased with American actions to counter Islamist elements in Afghanistan and Central Asia, however, as time has gone on, the Kremlin no longer sees Washington’s presence as beneficial, Graham said. The Russians are particularly unhappy with Washington’s lack of focus on eliminating the production of narcotics in Afghanistan—which is a huge problem for both Moscow and the Tehran, Graham said.

More fundamentally, Moscow sees the Taliban as the lesser of two evils as the threat from the Islamic State group starts to grow inside Afghanistan. Indeed, the single-minded American focus on defeating the Taliban to the exclusion of all else is problematic for Moscow, which sees ISIS as a far greater problem. “Because of the struggle between the Taliban and ISIS over the tactics and leadership of various terrorist groups, the Russians have tilted toward the Taliban,” Graham said. “It’s kind of ironic to see the Russians who were complaining about our support of the Taliban in the 1990s now aiding the Taliban.”

Moreover, the Russians are hoping to bog down the United States in Afghanistan while they devise their own regional solution to the problem that excludes Washington, Graham said. “They don’t believe the United States has the staying power, that eventually we will tire of this,” Graham said. “It’s not in our neighborhood, it is in their neighborhood. They have nowhere else to go.”

That ultimately is the question. Does the United States have the will to stay the course to remain in a war that could last for generations? Only time will tell.