America Just Lost One Of The Most Decorated Soldiers In History 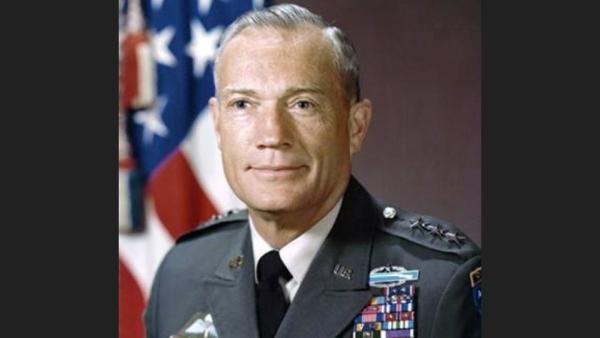 He later served in Korea and Vietnam, becoming a hero of both conflicts. He’d go on to command the 82nd Airborne Division and, later, the 18th Airborne Corps and Fort Bragg.

But Lt. Gen. Tackaberry, who died Monday at the age of 93, wasn’t defined by the three stars he wore on his uniform at the end of his 38-year military career.

Nor did the numerous medals that made him one of the most decorated officers in Army history — three Distinguished Service Crosses, five Silver Stars, a Distinguished Flying Cross and a Soldier’s Medal, among many others — provide the full measure of a man long devoted to his country and his family.

“He never talked about his awards,” said retired Brig. Gen. Burt Tackaberry, one of his oldest sons. “He was very humble. He knew what he achieved, but was very quiet about it.”

After his Army career, the general lived quietly at the family home in Gates Four and later, in a Fayetteville nursing home, his son said. But he was fiercely proud of his service, especially within the 82nd Airborne Division and at Fort Bragg.

Instead of medals and war-time heroics, Brig. Gen. Tackaberry said his father’s stories focused on soldiers, whom he treated much the same way he treated his own family.

“He loved soldiers, and he loved his children,” Brig. Gen. Tackaberry said. “He gave both a lot of latitude and a lot of responsibility, and he expected you to get the job done.”

“He was a soldier’s soldier,” his son added.

“That’s what they call a leader who goes out of his way to see his troops have enough beans and bullets to carry them through the long trek and the fight to follow,” the author of the profile wrote.

Another article, dated June of the same year, described Lt. Gen. Tackaberry as a rugged, yet compassionate man “with John Wayne-like qualities.”

Brig. Gen. Tackaberry said his father taught him that leaders should be firm, but fair.

At a time when many commanders were known for bluster and an expletive-filled vocabulary, Lt. Gen. Tackaberry believed that motivating soldiers required more than scare tactics.

After his Army career, Lt. Gen. Tackaberry briefly served as a manager of a local real estate office before joining a private firm, BDC Corp., as the head of a six-person team that advised the military of the Republic of China.

As an Army leader and a father, Brig. Gen. Tackaberry said his dad led by example, often setting a high bar for fitness.

As the commander of the 82nd Airborne Division, then-Maj. Gen. Tackaberry would often lead paratroopers on lengthy runs from the division headquarters across Fort Bragg to Smith Lake and back. The general would have a picnic spread waiting for the soldiers’ return, but few reported much of an appetite after the test of endurance.

Months before his passing, a member of the family jokingly challenged the retired general to push-ups.

Brig. Gen. Tackaberry said his wheelchair-bound father didn’t hesitate. He slipped out of his chair and promptly completed a set of 10 push-ups.

“It was unbelievable,” he said.

Lt. Gen. Tackaberry’s example instilled a devotion of duty to country not only in his soldiers, but in his family. His twin sons, Brig. Gen. Burt Tackaberry and retired Col. Kief Tackaberry, both served lengthy Army careers, including stints in the 82nd Airborne Division. And multiple grandchildren are serving.

Despite a busy Army career, Lt. Gen. Tackaberry always made time for his family.

“He was a family man,” Brig. Gen. Tackaberry said. “He came to almost all of our games.”

At Arlington National Cemetery later this year, the general will be buried next to two of his children who preceded him in death, Richard Tackaberry and Elizabeth Tackaberry.

He is survived by his wife, Lilian Tackaberry, and two other sons, Thomas H. Tackaberry and Steven S. Tackaberry.

On Fort Bragg, officials responded to news of Lt. Gen. Tackaberry's death by praising what he did for the post and the Army as a whole.

“We remember and honor the service, sacrifice, leadership and tremendous example of Lt. Gen. Thomas Tackaberry,” said Maj. Gen. Paul J. LaCamera, deputy commanding general of the 18th Airborne Corps and acting senior commander of Fort Bragg. “We'll keep his family in our thoughts and prayers during this difficult time. Though he is no longer with us, his legacy is forever enshrined in the history of the 82nd Airborne Division, 18th Airborne Corps and our great Army.”

A spokesman for the 82nd Airborne Division said the All Americans — who are celebrating the historic unit’s 100th anniversary this year — were saddened by the loss of their former commander.

The spokesman, Lt. Col. Joseph Buccino, said the general “has a permanent place in the legacy of America's Guard of Honor.”

Commanding the 82nd Airborne and the 18th Airborne Corps were “dreams come true” for Lt. Gen. Tackaberry, according to his son.

He led the division between 1974 and 1976, nearly three decades after he first served in the unit, as a private and machine gunner in the division’s 504th Parachute Infantry Regiment. And he led the corps and Fort Bragg from 1979 to 1981.

Lt. Gen. Tackaberry came from humble beginnings, as the son of a barber and a tax collector in Los Angeles. But even from a young age, he seemed destined for greatness.

A high school sports star and valedictorian, Lt. Gen. Tackaberry was starring for the Occidental College track team when, as a 19-year-old, he enlisted in the Army Reserve while the nation was still at war.

After serving in various infantry and paratrooper infantry units, Lt. Gen. Tackaberry was commissioned as a second lieutenant and served from late 1945 to June 1948 in Germany as part of the Army of Occupation.

In Korea, he organized a volunteer patrol to go into enemy-held territory in search of wounded U.S. troops, leading the patrol under intense small arms fire, heavy mortar and artillery bombardment and through a known minefield to rescue the wounded and prevent others from being captured by the enemy, according to an award citation.

In another incident, he left the relative safety of his command post to cross a minefield under intense enemy artillery fire to aid a United Nations patrol that was under attack. While exposed to enemy fire, he organized efforts to care for the patrol’s wounded and then covered the unit’s escape with his weapon.

In Vietnam, then-Lt. Col. Tackaberry flew to the rescue of a besieged firebase under fire from three companies of North Vietnamese Regulars. At the firebase, he leaped from his helicopter, braving relentless enemy fire to move from position to position while leading the defense of the base, according to officials. He then left the base to direct an assault against the enemy.

In another incident, he led a search and destroy operation in which a 15-man platoon was pinned down and its leader killed. The general ordered his unarmed command helicopter to land near the firefight and ran through intense enemy fire to reach the platoon and assume command.

When reinforcements arrived, he led an assault on enemy bunkers, forcing the larger North Vietnamese force to retreat.

At the end of his career, Lt. Gen. Tackaberry said he had no regrets about his service.

“If I were given one wish, I’d ask to start all over again and jump on that street car in Los Angeles and tell the sergeant at that station that I wanted to join like I did on Oct. 23, 1942,” he said.

His final assignment was as the commander of the 18th Airborne Corps and Fort Bragg, during which he helped foster what he called the “second golden age of the airborne.”

Lt. Gen. Tackaberry led the corps as it assumed the role as the nation’s “Strategic Army Corps,” responsible to serve as a quick-strike force for immediate deployment to world hot spots.

He also played a hand in petitioning the Army to officially approve the maroon beret that is synonymous with paratroopers. The beret, which was long described as a “non-standard” uniform item by the Army, was briefly banned in the late 1970s.

Before that, Fort Bragg soldiers wore the berets on an unofficial basis, often carrying a signed card from their commander that they would show when challenged by officials from other units.

After the Army outright banned the beret, Lt. Gen. Tackaberry was among the leaders to ask for its return.

“I think the beret is good,” he said while at the helm of Fort Bragg. “I didn’t realize how important it really is to the young trooper, and veteran soldiers, for that matter, until I arrived.”

Brig. Gen. Tackaberry said his father was always on the side of soldiers.

“His philosophy was ‘Take care of soldiers and they would get the job done,’” he said. “He loved his soldiers. And he absolutely loved the Army.”

Military editor Drew Brooks can be reached at brooksd@fayobserver.com or 486-3567.