Ohio town places 2,000 flags on veterans’ graves in under 30 minutes for Memorial Day

“It’s just good to come out here and put flags out for the people that represented our country." 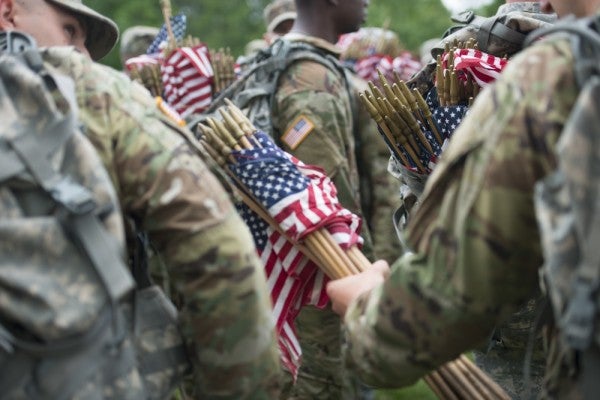 “We wanted to make sure that people still understood that the service and the sacrifice of those who have fallen in defense of this nation is not forgotten, despite whatever else is going on right now,” said Navy Reserve Lt. Cmdr. Haraz Ghanbari, post commander and a Republican state representative from Perrysburg.

Saturday morning’s turnout at the cemetery showed the community remembers its veterans. Parking was scarce as volunteers flooded the historic cemetery. Local veterans, law enforcement, scouts, church groups, other organizations, and families joined in and all of the flags were placed in 30 minutes or less, Commander Ghanbari said.

“I’m just very grateful and humbled by all the folks that came out on a Saturday morning to join American Legion Post 28 in honoring our brothers and sisters, our comrades in arms,” he said.

Veronica Mora knew exactly where to go to place the most important flag for her family. Her late husband, Army Sgt. Arthur Mora, Jr., was killed by an improvised explosive device Oct. 19, 2005, while serving in Operation Iraqi Freedom.

“I liken it to a scab,” she said. “It’s healed and you always see it, but there are moments throughout the year that it reopens. Memorial Day is definitely one of them.”

This year for Ms. Mora’s family has been painfully bittersweet. Sergeant Mora’s three children are hitting major educational milestones — one is graduating high school, another committed to the culinary arts program at Penta Career Center, and the youngest will soon enter high school. Ms. Mora also obtained her bachelor’s degree this spring from the University of Toledo.

“These are all big moments, huge family moments,” Ms. Mora said. “And his absence is so glaring. It’s surreal.”

The mass cancellation of Memorial Day events in which her late husband and others would have been remembered has been difficult, she said. But the turnout at the cemetery Saturday morning helped her see that many people are still finding ways to honor veterans.

Lt. Scott Wyckhouse of the Ohio State Highway Patrol’s Findlay post and his daughter Jordan Mohler joined fellow troopers in placing flags. The lieutenant is a veteran of the Air Force, in which his daughter enlisted as an airman in 2018.

“I’ve tried to instill values in my children and what I learned in the military, the respect for all the people who served before us,” Lieutenant Wyckhouse said. “For the two of us to do this together, it’s a special thing for me.”

Airman Mohler said Memorial Day has a deeper significance for her since she enlisted. The small gesture of placing flags at veterans’ graves is personal and meaningful.

“It’s just good to come out here and put flags out for the people that represented our country, just like I’m trying to do now,” she said.