American JTACs Return To Mosul. This Time To Crush ISIS

Live streaming footage of the offensive to retake the Islamic State stronghold of Mosul appears to confirm what military officials... 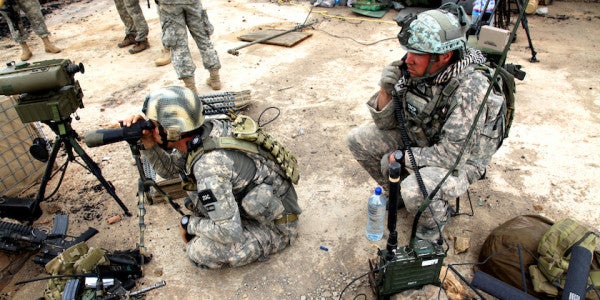 Live streaming footage of the offensive to retake the Islamic State stronghold of Mosul appears to confirm what military officials had predicted in the months leading up to the operation: It’s going to be a long, complex, and bloody fight. Meanwhile, behind the scenes, as the Iraqi coalition inches closer to the city, a small contingent of American soldiers are playing an increasingly critical role.

Whether Americans will be on the ground inside Mosul, remains to be seen, but given the coalition’s heavy reliance on American close air support, it’s almost impossible to guarantee that won’t be the case.

Smoke from coalition airstrikes rises from Mosul.Photo by Sebastiano Tomada

In a statement released at the start of the operation, the American general in charge of the coalition in Iraq and Syria, Lt Gen. Stephen Townsend, acknowledged the deployment of additional assets to the front lines, including “forward air controllers”— or joint terminal air controllers.

“A JTAC’s primary mission is to control and coordinate close air support in close proximity of troops,” Jarred Taylor, who served 14 years as a JTAC and fought in Mosul in 2005, told Task & Purpose. “The whole reason we exist is to make sure that we’re not bombing ourselves.”

JTACs work alongside both conventional and special operations forces, essentially functioning as the eyes on the ground for attack aircraft. It’s a dangerous job. Since 2001, more than a dozen JTACs have been awarded the Silver Star, the military’s third-highest award for valor in combat.

When Taylor was in Mosul in 2005, he was involved in a wide range of combat missions, including daily presence patrols with a Stryker unit and Special Forces night raids on high-value targets. “It’s a very dense urban environment,” he said. “At eight and ten thousand feet from an airplane everything looks the same.”

The battle inside Mosul will be much more claustrophobic than what’s being waged at the moment. “That’s when it gets real,” Sebastiano Tomada, a photographer with Getty Reportage who is currently embedded with Kurdish Peshmerga forces southeast of Mosul, told Task & Purpose. “Right now, the war is being fought at a distance. The coalition airstrikes are constant and very effective.”

As the coalition advances from the city’s outskirts into its center, rolling plains and small villages will give way to congested neighborhoods and narrow alleyways, making it increasingly more difficult to call in precision airstrikes on ISIS targets, especially from a distance.

Furthermore, refugees who’ve fled the city since the operation began have reported seeing the militants adopt the same tactics, like using human shields and hiding among the civilian population, that made battling the insurgency in Mosul so difficult during the American occupation.

“The biggest challenge a JTAC is going to face inside the city is trying to accurately identify where the friendly forces are at all times,” Taylor said. “They have to be in constant communication with the ground commanders, because if you’ve got 200 Peshmerga out there maneuvering and fighting against ISIS, you need to know where they are — you need to effectively explain to the aircraft where these bombs need to go as opposed to where they don’t need to go.”

The offensive began on Oct. 17 with U.S. warplanes launching a series of major bombing runs and is expected to last weeks, maybe months. The unfolding battle will ultimately pit a coalition of about 80,000 Iraqi army soldiers, Kurdish Peshmerga, and sectarian militiamen against an estimated 5,000-6,000 ISIS militants hunkered down in what is the most populous city under the terrorist group’s control.

The total number of U.S. service members on Iraqi soil at the moment is upward of 5,000, according to the Pentagon.