"Many American's don't know we're still searching for missing Americans across the globe from past conflicts dating back to World War II." 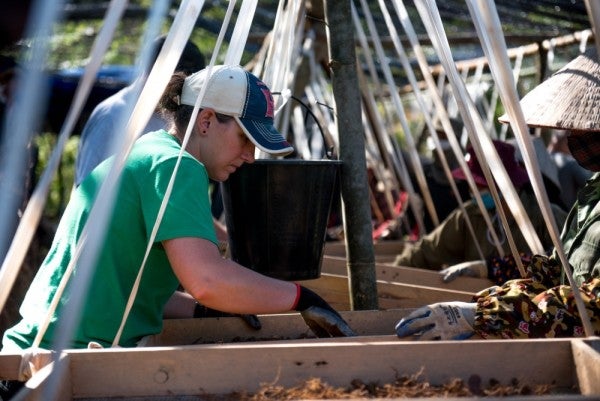 “I don't know if this would have come in my direction. It was something I actually sought out and volunteered for on my own,” she said last week during a telephone interview from Hawaii, where she is stationed.

The little-known Defense POW/MIA Accounting Agency conducts similar missions all the time as part of its charge to find the remains of approximately 34,000 missing Americans who might be recoverable from World War II, the Korean War, the Cold War, and the Vietnam War. Another 41,000 are presumed missing or lost at sea.

“It's amazing how many Americans don't know and/or realize that (the Defense Department) is still searching for missing Americans across the globe from past conflicts dating back to World War II,” said Lt. Col. Ken Hoffman, public affairs officer for the accounting agency.

During the most recent fiscal year, 218 formerly missing persons from past conflicts were accounted for, the highest yearly total recorded by the agency or its predecessor organizations, some of which faced scrutiny over their effectiveness. A 2013 internal report was highly critical of the former Joint POW/MIA Accounting Command, which led to the creation of the current iteration in 2015.

Each search mission is unique but involves many months of planning in advance, Hoffman said, and coordination with counterparts in other countries, such as Vietnam. Reyes said she learned about the work from a member of her unit in Hawaii who couldn't say enough about the experience.

“I found it very interesting and rewarding, and a little bit emotional,” she said. “It's a little different than studying it in a history book.”

The mission didn't yield any remains, but Reyes and her team did find several pieces of aircraft, as well as fragments of uniforms, that held promise for a future search of that site.

Reyes enlisted in the Air Force in 1999 not long after she graduated from Marshwood High School. It's been her career ever since.

She's had several posts, mostly in communications, IT and management, that have taken her all over the world – Panama City, Colorado Springs, the Azores (islands off the coast of Portugal) and Charleston, South Carolina. She's had two deployments – to Kuwait in 2003 and Kosovo in 2008 – both postal assignments. This is her second stint in Hawaii. She has three daughters – Alycea, 11, Adalia, 7, and Amelia, 5.

Reyes, whose parents and extended family still live in Maine, said she doesn't come back home as often as she'd like, usually every other year. That could change soon. She said she has one year left on her current assignment and thinks she's ready to “take the uniform off.”

That's one of the reasons she jumped at the opportunity to volunteer for the accounting agency mission to Vietnam.

“Once I heard a little more about it, I mean, we pay respect to our fallen or deployed heroes during every ceremony. every flag-raising. We constantly have them on our minds,” she said. “To be able to smell the air and be in the same place, it just made the whole story come alive for me.”

As a matter of policy, the agency does not release the name of specific individuals who are being searched for until positive identification is made for any remains found. Hoffman would only say that the individual was a U.S. Air Force officer and was on board a fighter jet that went down. But Reyes and the others on the team knew the name.

“We get briefed when we get over to the actual site,” she explained. “We have a board with all the historical information about who the individual is and what happened, what the mission was, and we hang that up.”

Every day at lunch, they would look at the board, connecting them to a conflict two generations removed and a service member who made the ultimate sacrifice.

There aren't many people in Maine who have been on the waiting end of those search missions, but Greg Getchell of Portland is among them.

His father, Air Force Lt. Col. Paul Getchell, was co-piloting a bomber when it crashed into a mountainside in Laos, just west of Vietnam, in 1969. Last week marked the 51st anniversary of his death. Greg Getchell was only 4 at the time and his memories of his father are mostly colored by stories from others. In 2007, after years and years of searching, military officials found two small fragments of bone that were identified as his father's remains. They were brought back to the U.S. for a full military funeral at Arlington National Cemetery.

“It dragged on for quite a long time but it was a huge sense of relief to be able to give him the service he deserved and to be buried in Arlington where he belonged,” Getchell said.

Lang Son Province is a little more than 100 miles northeast of Hanoi, the capital, and near the country's border with China.

Reyes said the team would travel there each day through the countryside.

The work itself was monotonous, even boring at times, she conceded. It's kind of like an archaeological dig, only a little more somber. Crews carefully sift through bucket after bucket of soil looking for any clues.

A lot of work goes into selecting a site.

Reyes said the most memorable moment for her came when the crew discovered the first piece of aircraft wreckage, which made the experience real.

“At first we were finding little white pebbles,” she said. “I thought every white rock might have been something. But then we started finding real pieces (of aircraft). It started making me feel good about why I'm here and what we are here to do. It just kind of made the mission come alive after we started finding pieces.”

In addition to the aircraft, searchers found pieces of a military uniform, another sign that remains might be near. When the mission ended on Dec. 4, the agency kept the site active, which means a team will return at a later date.

“It is not unusual to take months or even years to completely excavate a site,” Hoffman said.

That was true in Getchell's case. His mother, Teresa Getchell, who was widowed on that day in 1969 and never remarried, spent her life searching for answers and even traveled to Laos once to help search.

“When the government says they want the fullest accounting of service members, I think that's truthful,” Greg Getchell said. “I do think they are committed to bringing everyone they can home.”

Hoffman said missions like this are only possible with the cooperation of the countries where the searches happen. He said the U.S. and Vietnam have collaborated for more than 30 years on search efforts and are “working more closely than ever on investigations and excavations throughout Vietnam.”

Not every country is as accommodating. Searches have been suspended in North Korea since 2005 because of ongoing tensions between that country and the U.S., largely over nuclear weapon capabilities.

But Reyes said the team's counterparts in Vietnam were gracious hosts.

As for volunteering for another search, Reyes said: “I would love to do this again. When I came back, I tried to see if there were any vacancies in this unit.”