On Thursday, John Phillip Walker Lindh, whose haunting image captivated America after his 2001 capture in Afghanistan, is set to be released from an Indiana federal prison after serving most of his 20-year sentence. 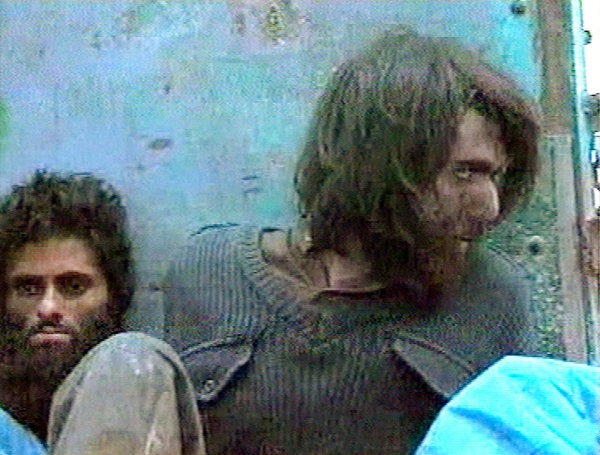 To many, he was the homegrown face of terrorist treachery who left a comfortable Marin County life to train for jihad with Osama bin Laden and fight for America's foes in Afghanistan. To others, he was a wayward teenage spiritual seeker swept up in the Global War on Terror.

This week, a generation after 9/11, the “American Taliban” will be a free man.

On Thursday, John Phillip Walker Lindh, whose haunting image captivated America after his 2001 capture in Afghanistan, is set to be released from an Indiana federal prison after serving most of his 20-year sentence.

“I guess the question we have to ask is, does he represent a threat?” said Alice Hoagland, of Los Gatos, whose son died a hero in the bin Laden-directed Sept. 11, 2001, terrorist attacks.

That remains the unsettled question, as Lindh, now 38, remains as much a mystery as when he first appeared bearded, dazed and disheveled on TV screens in December 2001, an odd footnote in America's ongoing battle against radical Islamic terrorism.

Lindh denounced terrorism when he was sentenced as contrary to Islamic teaching, but has avoided public comment since. He, his family and his lawyers have refused recent interview requests.

Federal prison officials would not say to which community Lindh will be released without his permission or discuss other details of his release, which comes a few years short of his 20-year sentence due to credits for good conduct and time served before his sentencing.

Lindh will be under three years of supervision following his release, which will include special conditions. He cannot have online communications in any language other than English, cannot communicate with any known extremist or possess or view extremist or terrorist material. He also cannot leave the country without permission and must undergo mental health counseling.

Hoagland is unsure what to make of him and his looming release. Her own son, Mark Bingham, died when United Airlines Flight 93 crashed into a Pennsylvania field while he was fighting hijackers who planned to smash the plane into the White House or U.S. Capitol building.

“There are so many more people who have more blood on their hands,” Hoagland said, referring to bin Laden associates like Khalid Sheikh Mohammed, facing charges from a U.S. military commission at Cuba's Guantanamo Bay of plotting the 9/11 attacks. Lindh, by contrast, proved “ineffective,” she said, adding, “I just hope he does not align himself with terrorists one more time.”

Lindh's divorced parents and legal defense team have, in rare interviews over the years, portrayed him as a devout young man who just wanted to help the Taliban fight injustice by their Afghan enemies, not kill fellow Americans.

J. Wells Dixon, a senior attorney for the Center for Constitutional Rights who specializes in challenging detentions at the Guantanamo prison but was not involved with Lindh's case, said he “was very clearly a victim of the times, the post-9/11 era, and that climate of fear.”

But others offer a darker picture of Lindh. The family of Johnny Michael Spann, a CIA officer who became America's first Afghanistan war combat casualty when he was killed Nov. 25, 2001, in a Taliban detainee revolt after questioning Lindh, opposes his release.

“John Walker Lindh had the opportunity to tell Mike right there, 'You're an American, I'm an American. … We've got weapons in this building and we're going to overtake this fort,'” Spann's mother, Gail Spann, told Alabama lawmakers in March. “He chose not to because he was a Taliban. He's a traitor to our country.”

The Alabama Legislature approved a resolution opposing Lindh's release, citing accounts in recent years of government reports casting doubt on the sincerity of Lindh's rejection of terrorism and suggesting he remains a threat.

America was introduced to Lindh in December 2001, when the country was reeling from the 9/11 attacks on New York and Washington, D.C., that killed nearly 3,000. The U.S. had invaded Afghanistan that October after its ruling fundamentalist Muslim Taliban refused to hand over bin Laden and his Al Qaeda group, who claimed credit for the attacks and were encamped there.

Lindh was among captured Taliban fighters who surrendered after the revolt that killed Spann. Initially identified as “John Walker,” his mother's maiden name, Lindh spoke in an Arabic accent to a CNN reporter from a hospital where he was being treated for a gunshot and other wounds.

Though he didn't talk of fighting Americans, he expressed an affinity for the Taliban and its holy war. Video later surfaced showing Spann questioning Lindh, who refused to respond, shortly before Spann was killed.

He was the middle child of a Buddhist convert mother and a lawyer father who was raised Catholic and later married a man. Lindh embraced Islam at age 16, inspired by black Muslim leader Malcolm X, and went to Yemen at age 17 to study Arabic and the Koran.

After half a year back home, Lindh returned to Yemen in 2000 and later that year traveled with his father's permission to Pakistan to study at an Islamic religious school. There, he was drawn to the Taliban in neighboring Afghanistan and its quest to form an Islamic nation and fight secular enemies he believed were raping Muslim women and killing children.

Lindh was among 86 Taliban who surrendered Dec. 1, 2001, from a Qala-i-Janghi fortress basement where they had fled during the attempted breakout after being flushed out with cold water and grenades.

After his capture, a federal grand jury indicted Lindh on 10 counts, including conspiring to kill U.S. nationals and providing support and services to Al Qaeda and the Taliban for which he could have faced multiple life sentences.

But in July 2002, prosecutors struck a deal with Lindh and his lawyers. He would plead guilty to supplying services to the Taliban and to carrying an explosive device — a rifle and grenades — while fighting for the group.

The deal came amid concerns that Lindh's treatment by his U.S. captors — including being bound naked to a stretcher with tape — and interrogation without a lawyer might hurt their case.

Lindh's last public statements were tearfully delivered in a Virginia courtroom at his sentencing in October 2002, during which he denounced bin Laden, called joining the Taliban a mistake and condemned terrorism “on every level, unequivocally.”

Lindh briefly met bin Laden, who visited his Taliban training camp three times. But according to a 2003 New Yorker article, Lindh told a terrorism expert he wasn't impressed by bin Laden, whose only remark to him was “I am glad you're here.” He said he turned down a private request from an Egyptian Al Qaeda trainer for a martyrdom operation against U.S. or Israeli targets, and was horrified by 9/11, but feared for his life if he deserted the Taliban.

But a 2017 article in Foreign Policy magazine based on leaked government reports suggested Lindh remains a terrorist threat. It cited a Jan. 24, 2017, report by the National Counterterrorism Center, established after 9/11 to coordinate the nation's anti-terrorism efforts, saying Lindh is among more than 90 incarcerated “homegrown violent extremists” due to be released in the next five years.

A Jan. 11, 2017, Federal Bureau of Prisons Counterterrorism Unit summary indicated Lindh's father was trying to help him resettle in Ireland after his release but that he would need to “mend fences” with his former lawyer who had dropped him over “pro ISIS statements.”

Lindh's response to his father, according to the document, was that he was “not interested in renouncing my beliefs or issuing condemnations” and that after his release he would “deal with the lynch mobs as best I can.”

The National Counterterrorism Center and Bureau of Prisons would not comment on the documents but didn't dispute their authenticity. The counterterrorism center said in a statement that “we have observed the numerous terror acts round the world committed by former terrorist prisoners after their release” and that “recidivism and radicalization continue to be persistent problems.”

Much has changed since Lindh's capture. A new skyscraper has replaced the World Trade Center's twin towers destroyed on 9/11. U.S. forces killed bin Laden in 2011. Fighting continues in Afghanistan amid negotiations with Taliban remnants and the U.S.-backed Afghan government.

“I'm going to try to keep a happy thought about Mr. Lindh,” Hoagland said. “I hope he goes into the bosom of his family and marries and lives an uneventful life.”