Hundreds of thousands of U.S. service members are buried far from home

"This is what the Americans did for us." 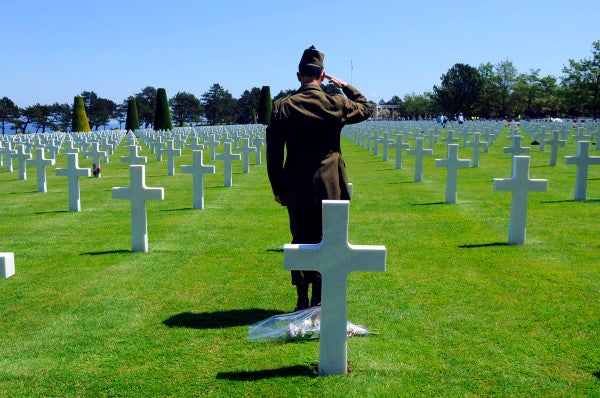 PORTLAND — They are “the honored dead” for this special day each year, on Memorial Day.

But for the rest of the year, America's war dead of the 20th century can be far removed from the nation's awareness.

The final resting places of some 124,000-plus U.S. servicemen are at far-away hallowed grounds not always known to their countrymen.

They are America's overseas military cemeteries.

There are 26 cemeteries in 17 foreign countries, ranging from the Philippines, to England, France, Luxemburg, and Italy, to Tunisia, and Mexico City.

Perhaps the only overseas cemetery well-known to many is the cemetery at Colleville-sur-Mer in Normandy, which was featured in the film “Saving Private Ryan.”

But it is in these cemeteries that the toll of a century of war, sacrifice, heroism and death unfolds.

Reg Farrington, a retired lieutenant colonel who served in the Army for 26 years, and is the guest speaker at Portland's Memorial Day Parade Sunday, said the true meaning of Memorial Day is found in these hauntingly sad but beautiful sites.

That is especially so this year: June 6 marks the 75th anniversary of D-Day, the Allied invasion of Normandy during World War II, Farrington said.

The cemeteries draw their power from their simplicity: rows upon rows of glistening white crosses or Stars of David set against deep green, meticulously manicured lawns.

The cemeteries are overseen and administered by the American Battle Monuments Commission.

The commission was established in 1923, in the wake of World War I.

The commission's website contains photographs and histories of each cemetery and/or monument under its care.

The photographs give some sense of the cemetery's beauty.

A brief video, “Never to be Forgotten: Soldiers of the Meuse-Argonne,” presents both a history of that cemetery as well as its solemn beauty.

The families of men killed in the world wars were offered the option of having their remains brought home to be buried in America or buried in or near where death claimed them.

But in a sense, they all lie in American soil: the cemeteries were “granted in perpetuity by (the) respective host countries free or charge or taxation,” according to the ABMC website.

The cemeteries also serve as markers in the ebb and flow of history across the years of America's involvement in two world wars.

The names of the World War One cemeteries summon up acts of incredible bravery amid a kind of mechanized death that no one imagined they would ever be called upon to withstand: Belleau Woods, Meuse-Argonne, Lorraine.

They are signposts that mark the fledgling American Expeditionary Force extended battle across Northern France in an effort to break the stalemate in the last desperate months of World War I.

Belleau Woods was where the U.S. Marine Corps earned the grudging admiration of the German Army, who labeled the Marines “Teufel Hunden” – “Devil Dogs” or “Höllenhunde” “(Hell Hounds”).

The Marines fought in the forest for nearly a full month, June 1-26, to break the back of the Germans' spring offensive of 1918.

In the end, 1,811 Americans had been killed and nearly 8,000 were counted as either wounded or missing in Belleau Woods.

Another 52,402 Americans were killed in combat in the 200 days when the AEF encountered massed artillery and untold numbers of the Maxim machine gun.

The second wave of European cemeteries, those created after World War II, mark the toll taken of the U.S. Army in the 336 days from D-Day across Northwest Europe until, united with the Krasnaya Armiya (the Red Army), Hitler and Nazism were destroyed on May 8, 1945.

Given the vastness of the Pacific War, there are three cemeteries for the servicemen who fought and died there: one in Hawaii, and two in the Philippines, one at the former Clark Field, the other in Manila, according to the ABMC.

The Manila cemetery is the largest overseas cemetery. A total of 17,201 men are buried there.

The largest European cemetery is the Meuse-Argonne Cemetery in France, home to the graves of 14,246 service members, according to the ABMC website.

The cemetery in Mexico City contains the remains of Americans killed in Mexican/American War of 1846.

A cemetery in Panama contains the remains of both veterans as well as military personnel who died building the Panama Canal.

The ABMC also maintains several memorials, several of which honor the more than 94,000 servicemen and women listed as missing in action.

Two of President Theodore Roosevelt's sons are buried in the Normandy cemetery, according to the ABMC

Theodore Roosevelt Jr., was the assistant division commander of the 4th Infantry Division that stormed ashore on Utah Beach on June 6, 1944.

He was 56, the oldest man and the only general to land on the beach on D-Day. (His son landed on Omaha Beach the same day.)

On July 12, Gen. Roosevelt died of a heart attack.

His brother Quentin, a pilot, had been killed in World War I, and was buried with full military honors by the Germans.

In 1955, Quentin's remains were moved to the cemetery at Colleville-sur-Mer, to lie beside Ted, according to ABMC.

Arguably one of the most well-known combat commanders of World War II is buried in Luxembourg among the men he had led, according to the ABMC.

George S. Patton died not in battle, but in a traffic accident after the war ended.

Despite his out-sized personality, Patton's grave is a simple one, no different from those of the other 5,072 men buried at the cemetery.

His grave is marked by a white stone cross that lists his rank (general), his place of birth (California), and the date of his death (Dec. 21, 1945).

Half a world away, “the GI's best friend,” newspaper columnist Ernie Pyle is buried in the Punchbowl National Cemetery in Honolulu.

Pyle was killed in an ambush on Okinawa in 1945.

Also buried in Punchbowl is Henry “Hank” Hansen, one of the six men who raised the flag atop Mount Surabachi on Iwo Jima, an action that was captured image in an iconic photograph.

The superintendent of the Normandy cemetery said one-third of the visitors at that site are Americans.

The other two-thirds are French, Belgian and Dutch families, usually led by grandparents who tell their grandchildren, “You must see this. This is what the Americans did for us.”

SEE NEXT: Arlington National Cemetery Is Running Out Of Space. Maybe We're Asking The Wrong Question About How To Fix It