You gotta do whatcha gotta do. 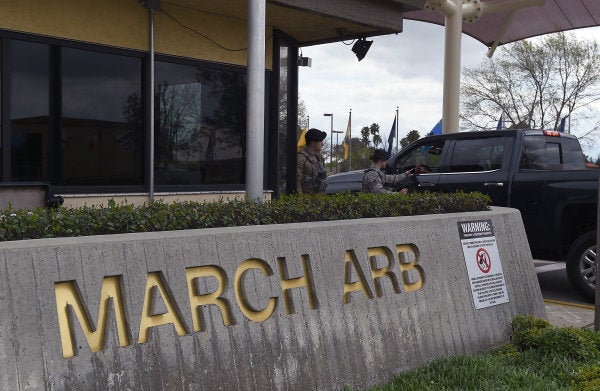 The dozens of Americans quarantined at a US Air Force base in California over the coronavirus have described taking boxing, Zumba, and even accounting classes as ways to pass the time, The Washington Post reported.

The 195 US citizens were taken from Wuhan, the Chinese city where the virus broke out, and flown to March Air Reserve Base in Riverside, California, on January 29. They are under a mandatory 14-day quarantine, meaning they would be released on February 12.

They are not allowed to leave the base and have been subjected to frequent medical tests for symptoms of the deadly coronavirus. So they are turning to their own sources of entertainment.

The entrance to March Air Reserve Base in Riverside on January 29, 2020. Matt Hartman/AFP/Getty Images

Here's what they have been up to, according to The Post:

“When people hear quarantine, they think of the zombie apocalypse, movies like 'World War Z,'” Matthew McCoy, the theme-park designer on the base, told The Post. “But the reality is it's what you make of it.”

The 195 people at March Air Reserve base are a fraction of the total number of Americans the State Department is flying out of Wuhan to take back home.

All of them are subject to a 14-day mandatory quarantine, and the Department of Defense has set aside six military bases in California, Texas, and Nebraska for the lockdown.

Americans flown out of Wuhan have also given harrowing descriptions of some parts of the evacuation and quarantine, like being flown in cargo planes with flight crew wearing full hazmat suits, being told to stay six feet away from one another at all times, and not being able to eat for hours on end, The Post reported.

Another woman and her 15-year-old daughter, who are observant Orthodox Jews, also said they couldn't eat for 40 hours because there was no kosher food available on board the cargo plane and at the March Air Reserve Base, The Post reported.

Deserted streets in Wuhan amid its quarantine. Getty Images

Other people quarantined around the world over the coronavirus — from Russia to Australia to Japan to China itself — have also been documenting their lockdown.

Many countries are imposing 14-day quarantines on people coming from mainland China, while the city of Wuhan and at least 15 other Chinese cities have had their transport links shut down.

A group of Russians quarantined in Siberia have been livestreaming their workouts and posting photos of their food and “prisoner clothes.”

Chinese citizens are making memes and sharing their innovative — but not necessarily helpful — ways to shield themselves from the virus, including wearing inflatable costumes to minimize contact with other people.