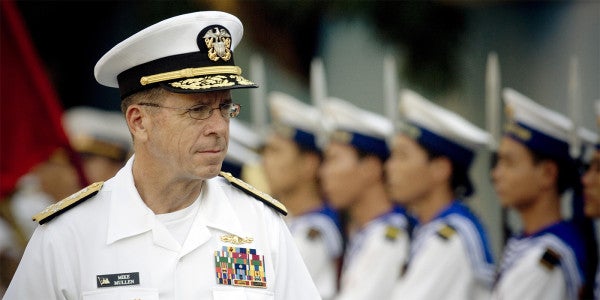 It's no secret: America loves the legendary generals who have taken key positions of power in the Trump administration.

But the nation's trust and dependence on these men to lead them through challenging political times may be misplaced, retired Adm. Mike Mullen said Thursday.

Mullen, who served as the 17th chairman of the Joint Chiefs of Staff from 2007 to 2011, said the way the nation is turning to these generals betrays a tendency not inherently American.

“I am increasingly — I'm not surprised, but I am concerned about the dependence of the American people on Jim Mattis, H.R. McMaster, John Kelly and Rex Tillerson,” he told an audience at the U.S. Naval Institute's 2017 Naval History Conference in Annapolis.

Mattis, McMaster and Kelly — who serve as secretary of defense, national security adviser and White House chief of staff, respectively — all attained four-star rank in the military. McMaster remains on active duty.

“The question that I ask is how did we get here, to a point where we are depending on retired generals for the stability of our citizenry,” he said. “And what happens if that boulder breaks, first of all, and when.”

President Donald Trump has encouraged reverence for the generals in his administration, particularly Mattis, whom he has referred to by the nickname “Mad Dog” and praised on Twitter as a “general's general.”

Mattis, who was lionized by troops while in the Marine Corps for his care for his men and straightforward style, had been out of uniform for only four years when he was nominated to serve as defense secretary.

Congress passed a one-time waiver of a law requiring defense secretaries to have been out of the military for at least seven years to allow Mattis to serve.

In a congressional hearing held prior to the waiver vote, military experts advised that Mattis be confirmed, but warned the waiver should not be used again for a long time to preserve the tradition of civilian leadership of the military.

In the past, Mullen has been outspoken about the civilian-military divide and has publicly criticized the recent trend of general and flag officers becoming keynote speakers at political conventions and publicly endorsing candidates for president.

He reiterated these views Thursday, saying that while retired officers have the right to endorse, they do damage to the military by eroding its reputation for impartiality.

Mullen qualified that he knows Mattis, McMaster and Kelly, and called them “extraordinary individuals in extraordinarily difficult circumstances.”

But he suggested it sets a dangerous precedent to turn to them as a focal point for national leadership.

“I have been in too many countries globally where the generals, if you will, gave great comfort to their citizens,” Mullen said. “That is not the United States of America. It may be temporarily now; I can only hope that it won't be in the future. And despite each one of these individuals' greatness, there are limits.”

In addition, he said, experience on the battlefield does not translate directly to leadership in the political sphere.

“When I walked into the Oval Office for the first time, that is an environment I'd never been in before, ever,” Mullen said. “… There is no reason these individuals, who are exceptionally good, had any better preparation in that regard. They are trying to figure it out as we go.”

Recent press reports, he said, have called the generals the “bulwark” of the administration.

“And one of the questions is, will that bulwark last, and what happens if and when it doesn't,” Mullen said. “My own belief is, it won't.”