How America’s Highest Ranking Woman In Uniform Defied The Odds

Lori Robinson wanted to be a teacher but didn't want to spend a fifth year hitting the books at the... 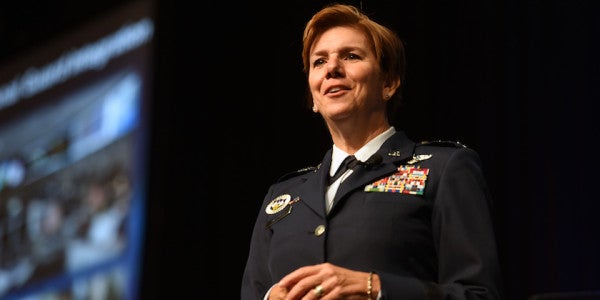 Lori Robinson wanted to be a teacher but didn't want to spend a fifth year hitting the books at the University of New Hampshire.

She was tired of school, so she sought temporary refuge in an unexpected place.

“I'll join the Air Force for four years and things will happen,” Robinson said of her decision. “I'll be just fine and I'll figure out something else to do.”

It wasn't supposed to be a career choice. But from that beginning came the meteoric, improbable rise of Gen. Robinson, America's highest-ranking woman in uniform and the first female to lead one of the nation's major commands.

Her trajectory presented plenty of obstacles, the least of which was gender, the general said during an interview with The Gazette at her office in the headquarters of U.S. Northern Command and the North American Aerospace Defense Command.

Related: This Air Force General Is Set To Become The Highest Ranking Woman In US History »

The biggest hurdle for Robinson may have been the dead-end job that came with her ROTC commission: air weapons controller, where she sat at radar screens to watch enemy movements and counter them by vectoring American planes. The job so alarmed Robinson's ROTC instructors that they urged her to bring her Air Force colonel father into play.

“You have to call your dad and get out of this assignment,” Robinson was told. “You're going to be in a brick house, and you'll never get promoted.”

But over 35 years, Robinson has watched the Air Force change its attitude toward controllers – now called air battle managers – along with its view of women.

Understanding how Robinson defied the odds to earn four stars means getting to know a girl from New Hampshire, a child born into a leadership role that came with rapid advancement.

“I'm the oldest of five,” Robinson said. “From oldest to youngest is six years.”

Her father, George Howard, was a fighter pilot who flew F-4 Phantoms and the F-101 Voodoo during Vietnam. He loved to fly, loved his country, and was squared away every day.

“He's 84 and can still fit in his uniform,” Robinson said. “One more thing I'll have to figure out how to do.”

While her father owned the sky, Robinson's mother, Tish Howard, ran the homefront, leading her brood through constant moves, wartime stresses and growing up. When Col. Howard headed to war, Tish Howard took the kids to New Hampshire.

“My mom was the one who took care of the five kids,” she said. “I don't know how she did it sometimes.”

Her parents wanted her to join the Air Force when she graduated from high school.

“I've been doing this Air Force thing for 18 years, and I've had enough,” she told them, of growing up in a military family.

But after four years of college, she found herself at home in uniform.

“I loved my job. I love controlling and talking to pilots and being a part of the combat air forces,” Robinson said.

Air battle managers like Robinson are a strange bunch. It's a job that mixes hours of mundane with seconds of complete chaos for airmen who use a radio and a two-dimensional radar screen to create a picture of three-dimensional warfare. The crews are expected to maintain a level of alertness normally induced by something close to panic while maintaining a surreal calm as they direct a deadly ballet in the sky.

In 1981, when Robinson signed on as a lieutenant, it was a career with few women and fewer prospects.

In the Air Force, rank has traditionally flowed to those who wear pilot wings. Those who push papers or fix planes seldom see stars. Those who fly radar screens were at the bottom of the pile.

“It was if you make major, you're lucky. Lieutenant colonel is incredible. Colonel is like 'ahhhhh,'” Robinson said raising her hands and making a sound that could be associated with the opening of heaven's gates.

A sign of how hard it was to find promotion in the field: Robinson is the first air battle manager to wear four stars.

As a lieutenant, Robinson became a student of her craft, working at radar stations in Florida and the Philippines to control fighters and bombers in flight with clipped radio commands.

Her promotion to captain in 1985 was followed by the biggest break of her career, when she was sent to what she calls her favorite place on the planet – Nellis Air Force Base, Nev. – as a student in the fighter weapons school.

“I remember my first day there as a captain,” she said, describing the Thunderbirds flying team taking off from a Nellis runway against a cloudless blue sky. “I just sat there and they were doing a practice over the airfield.”

Nellis is an acquired taste. Situated in the desert north of Las Vegas, it's a place of brown lawns, oppressive heat, sand and snakes. And lots of fighter pilots.

In 1986, women were rare at Nellis, and military rules forbid female fighter pilots. Robinson was the first female instructor at the fighter school.

But in a competitive environment with pilots and controllers battling to be the best, Robinson found family.

“It was like having a ton of brothers and a ton of big brothers,” Robinson said. “To this day, I call them all my brothers.”

Those brothers challenged Robinson – and taught her.

“I had some great mentors, some great leaders to learn from as a young captain at the fighter weapons school,” she said.

The woman who sought Air Force employment as a refuge from college a few years earlier began to look on the Air Force as a career, thanks to a commander who saw something in Robinson she hadn't noticed in herself: leadership.

“He said, 'I think you ought to think about coming back and being the commander of your squadron.' It was the first time I ever dreamed or thought about a future.”

And the Air Force changed the rules for female air battle managers. Once relegated to radar shacks, women were now allowed to fly aboard the E-3 Sentry – a Boeing airliner with a massive radar dome attached to the roof. The E-3 duty meant controlling clouds of planes in battle and came with a status symbol important in Air Force life: the winged badge given to nonpilot members of flying crews.

Years passed, with a whirlwind of assignments in Hawaii, Oklahoma and Virginia.

She married her husband, David, a F-16 and Thunderbird pilot.

Then in 1998, that dream Robinson set her sights on at Nellis a decade earlier came true – a return to Nellis and command of a squadron at the fighter weapons school.

“There is no greater privilege that the Department of Defense can give anybody than the privilege of command,” Robinson said.

The job put Robinson in charge of the daily lives of hundreds of airmen at a place where airmen gathered to hone their wartime skills with massive training exercises called “Red Flag.”

“It was absolutely like coming home,” she said. “To command and come home – awesome.”

She approached leadership with a mantra that propels her to this day.

“My job is to teach you to be better than me,” she told her airmen.

“None of us were born knowing how to be a commander,” she said.

The most painful lesson

The toughest lessons Robinson has learned came from a lieutenant who shared her last name.

Taryn Ashley Robinson was a 2005 graduate of the Air Force Academy, an aspiring fighter pilot, and Gen. Robinson's stepdaughter.

Despite severe injuries including burns over much of her body, the 22-year-old, who a few months earlier had traveled to Spain to run with bulls, crawled away from the wreckage.

Robinson was in a meeting with the Air Force chief of staff, Gen. T. Michael “Buzz” Mosely, when she got the news. She flew to Taryn's bedside at Brooke Army Medical Center where the lieutenant was swathed in bandages and kept in an induced coma. Recovery wasn't expected. But Taryn was a fighter.

Robinson watched as she battled to regain control of her body.

Sitting in her office at Northern Command recently, the general demonstrated the finger exercises Taryn fought through.

“It was excruciatingly painful, but her point was, 'If I'm going to go to pilot training, then I have to exercise,'” Robinson said.

Her husband, Taryn's dad, stayed at the hospital while Gen. Robinson commuted from Texas to the Pentagon.

She recalled telling Mosely about Taryn's battle to return to duty.

“He said 'You tell Lt. Robinson to focus on getting better, and I'll worry about pilot training,'” she said. “It doesn't get any better than that.”

The lieutenant had a cheering section that included President George W. Bush, who visited her hospital room.

But an infection struck and Lt. Robinson lost the fight, 111 days after the crash. She's buried at Arlington National Cemetery.

In talks with David, Robinson realized that Taryn had given them a precious gift. She taught them about courage and tenacity. Her death put life in stark perspective.

“We learned about how important it is to live each and every day,” she said.

The Robinsons still grieve, but they also found a way to draw strength, the general said.

Battles at the Pentagon faded in importance. Robinson said she found gratitude for “the opportunity and ability to wake up every morning.”

And she seized the opportunities that came her way.

In 2007, Robinson pinned on her first star and took command of a wing of E-3 planes and crews in Oklahoma.

In 2011, she pinned on her second star while working as the Air Force's representative to Congress.

In 2012, she took the No. 2 job overseeing American airpower over Iraq and Afghanistan.

The next year brought a third star and a visit home.

Not even taking charge of the defense of North America as the head of U.S. Northern Command in May can top a day she spent with her father in New Hampshire. His role in molding the general is hard to overstate. On a wall behind her desk at Peterson Air Force base, Robinson has a picture of the colonel swearing her in when she became an officer. She gave Col. George Howard her first salute.

On that day in New Hampshire, the colonel put on his aging uniform to escort his three-starred daughter on a trip to the local elementary school.

He watched as Gen. Robinson told children the lessons he'd taught her about integrity and hard work.

Robinson chokes up when she thinks about the approval he's shown for his daughter and her unexpected career.