If you haven't heard of Philando Castile yet, you will. He was a 32-year-old cafeteria worker with no criminal record... 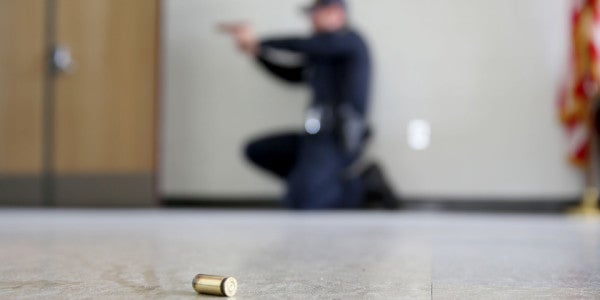 If you haven't heard of Philando Castile yet, you will. He was a 32-year-old cafeteria worker with no criminal record who was shot at least four times by a policer officer during a routine traffic stop on July 6 for a broken taillight. Immediately after the shooting his girlfriend, Diamond Reynolds, aka Lavish Reynolds, started streaming the incident using the Facebook Live feature.

In the video, Reynolds says Castile was carrying a firearm that he was licensed to carry, and she also says Castile told the officer that he had a firearm as well as a license to carry with identification before being shot. In the video, you can hear Reynolds telling the officer that he gave Castile instructions to produce identification. The cop, still pointing the gun in the direction of Reynolds, yells at her, and screams expletives while Castile bleeds out in front of his Reynolds, her daughter, and the officer. Reynolds is then removed from the vehicle, instructed to get on her knees, handcuffed, and placed in the back of a squad car with her daughter.

I can't help but wonder if the outcome would have been different if this officer had military experience under his belt — or frankly, just more training. In the military, there’s a good chance he would have had advanced firearms training, and he would have had rules of engagement beat into him. Under the rules of engagement, the officer would be well versed in “escalation of force” techniques that service members use to control a situation while mininizing unnecessary risk and injury.

Escalation of force training is not the only type of training that’s clearly lacking. In the military, we are expected to serve with people of all backgrounds and races, and we receive training on how we are expected to interact with people that come from different cultures and races, both within the military and in various countries where we are deployed. If you’re meant to protect communities, you can’t go into the environment with subpar training and expect to succeed in your mission.

Related: How The Rules Of Engagement Save Lives In Combat »

I didn't sign up to protect my country so that U.S. citizens could be killed by those assigned to protect them. I joined the military so that people like Castile and Reynolds could continue to enjoy their lives, their freedoms, and their liberty, without ever being told that they must wear the uniform themselves. When I see police officers and other authorities who don’t have the training to respond correctly to a simple traffic violation, I become enraged because I know from my own military experience that one bad officer can tarnish the reputation of the whole force.

According to The Washington Post, 509 people have been fatally shot by the police in the United States in 2016 alone so far. Four people were fatally shot by police as I wrote this article. And if we continue at this pace, fatal shootings by police officers in this country will surpass last year's total of 990. And while I realize that these police officers are many times very much justified in defending themselves, I also know that there are cases where they are clearly not justified, such as in the case of Castile. I am tired, and the American people are tired, of unnecessary violence and deaths that could be prevented by better training.

Viewing Reynolds’ video, knowing that her boyfriend did not survive, brought me to tears — especially at the thought of her young daughter being a witness and how Reynolds and her daughter will both likely suffer from some form of post-traumatic stress disorder after this. Reynolds must have truly felt helpless while she watched her boyfriend bleed out, and even after she was transferred to a squad car, they made no effort to update her on his condition. When her daughter told her, “It's okay, I'm right here with you,” in the back of the squad car, my heart just fell into pieces.

Americans who choose to a wear a police uniform take an oath similar to those who wear the military uniform: Protect our country and its people. It angers me that there are police officers out there who do not take this oath seriously. By watching this video, I have to wonder if the training this particular officer recieved was adequate for this situation, and if it was, why he felt this amount of force was necessary. Why does it seem that some police officers aren’t being issued proper training in how to handle a routine traffic stop? Why was shooting a man who posed no threat his solution to a problem that didn’t exist?