The United States has staged an improbable run for the World Cup, advancing from arguably the toughest group in the... 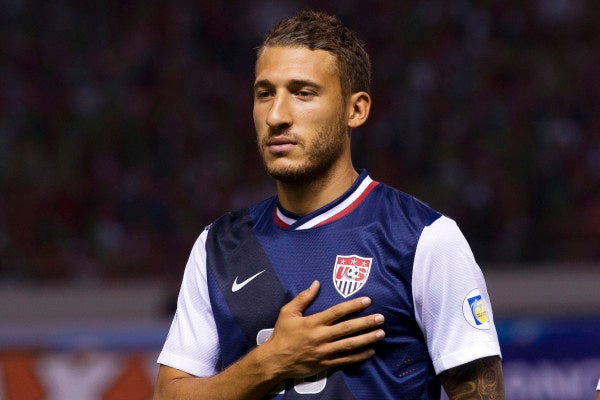 The United States has staged an improbable run for the World Cup, advancing from arguably the toughest group in the tournament. But wrapped in the story of the U.S. national team's run is a fascinating subplot of U.S. military presence overseas, American diversity, and the irresistibility of a man in uniform.

As Business Insider’s Tony Manfred noted in a recent story, the 23-man U.S. team includes an unprecedented number of players who have dual citizenship. The largest contingent of those are German, and of the five German-Americans on the U.S. team, all of them are the sons of U.S. service members.

The U.S. has a long history of military presence in Germany, starting during the world wars, and extending as the territory became a key part of the Cold War against the Soviet Union.

At present, there are dozens of U.S. military bases in Germany, and a 2011 CNN report stated that there were more than 50,000 members of the American military stationed there.

The U.S. men’s national roster is an unexpected manifestation of the effects of that military presence, and like much of the historical success of the United States, the success of its soccer team in the 2014 World Cup depends on its diversity and remarkable history.

American midfielder Jermaine Jones is an early hero of the World Cup. His second-half strike against Portugal saved America’s presence in the tournament.

Jones was born in Frankfurt, his father an American serviceman stationed in West Germany.

“I am one-half American and one-half German and now I want to play for the U.S.,” Jones told the New York Times in 2009 when he first joined the U.S. team ahead of the 2010 World Cup.

In explaining his desire to play for the Americans over the German team, Jones told the New York Times that in Germany he feels like more of an outsider, but in the United States, diversity is a part of the fabric of society.

“When somebody looks at me, I’m not the perfect German. When I look at people in the States, they look more like me,” he said.

Star American defensemen Fabian Johnson was also born in Germany. His father is Charles Johnson, an American basketball player who played in Europe, but first met Fabian Johnson’s mother when he was in the military and stationed in Germany.

He credits his versatility and work ethic in part to advice his father gave him.

Another example is John Brooks, who came off the bench to score the game-winning goal against Ghana early in the tournament. Brooks has never lived in the United States, though he holds dual citizenship. His father was a U.S. serviceman stationed in Germany.

In an interview with U.S. Soccer, Brooks explained his decision to play for the U.S., citing his ties to America and his father’s advice.

“The U.S. really wanted me, so it was not a hard decision to play for the USA I talked a lot to my family,” he said. “My dad, who is from Chicago, my mom, my sister, my grandparents, my agent … all of them gave me advice. Since I decided to play for the U.S., they have been very happy, congratulating me and wishing good luck.”

He bears a tattoo on each arm — one of his home city of Berlin, the other of his father’s home state of Illinois.

John Brooks tattoo: Berlin on his left elbow and Illinois on his right elbow.. #WorldCup pic.twitter.com/aX6rQDwB6s

And so the story goes with no less than 20% of the U.S. men’s national team, men drawn between two cultures, as is so often the case in an American story written by immigrants.

In addition to Jones, Johnson, and Brooks, the list includes Timmy Chandler, from Frankfurt, another German-American who is the son of a U.S. service member who was stationed in Germany; and Julian Green, who was born into a military family in Tampa, Florida, but raised in Germany, and has a German mother.

No matter how the American run for the World Cup ends, they have already defeated expectations, advancing beyond a terrible grouping that included Portugal, Germany, and Ghana.

Their success is a story of resilience, of progress, of being the underdog, to be sure; but it is also a story of American military history and the incredible diversity that makes this country so exceptional.