Amid ‘Please Stand’ Controversy, NFL Announces It Will Honor Veterans During Super Bowl

Days after receiving criticism from a national veterans organization for rejecting an advertisement urging players and fans to stand during... 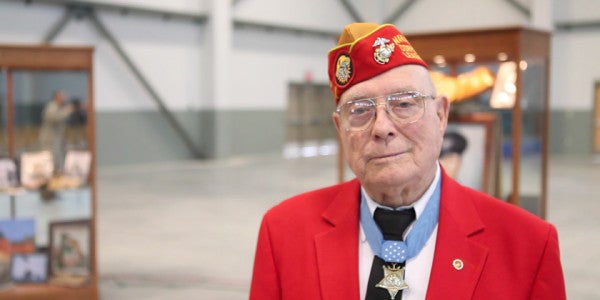 Days after receiving criticism from a national veterans organization for rejecting an advertisement urging players and fans to stand during the national anthem, the National Football League announced Thursday that it would honor veterans during Super Bowl LII.

Fifteen Medal of Honor recipients will be part of the Super Bowl coin toss ceremony on Feb. 4 in Minneapolis, the NFL announced. The game pits the Philadelphia Eagles against the New England Patriots.

World War II veteran Hershel “Woody” Williams, 94, will flip the coin, surrounded by the other Medal of Honor recipients. Williams received the Medal of Honor in 1945 for his actions during the Battle of Iwo Jima.

“The NFL is proud to honor our nation’s heroes at Super Bowl LII,” NFL Commissioner Roger Goodell said in a written statement. “These courageous individuals deserve to be recognized on America’s biggest stage.”

The announcement was made just days after American Veterans, known as AMVETS, spoke out against the NFL for rejecting a print advertisement the group submitted for the official Super Bowl LII programs. The full-page ad pictured the American flag, soldiers and the words “Please Stand,” referring to the movement of NFL players protesting racial inequity and injustice by kneeling during the performance of the national anthem before the start of games.

Following the outcry, NFL Vice President of Communications Brian McCarthy said official Super Bowl programs should not be used for political messaging and that AMVETS was given an opportunity to amend their ad.

AMVETS sent a letter to Goodell on Monday, calling the decision “corporate censorship.”

Other Medal of Honor recipients participating: