Next year's "Rolling to Remember" will take place from May 22-24 in Washington, D.C. 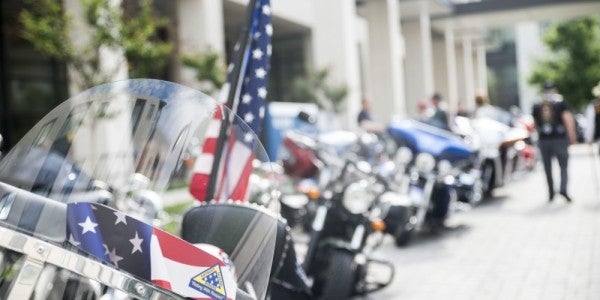 AMVETS made it official Friday: A “Rolling Thunder”-style motorcycle rally will take place next Memorial Day weekend in Washington, D.C., to honor the nation's veterans, POWs and missing-in-action.

In a release and at a news conference, leaders of the veterans service organization American Veterans, better known as AMVETS, said they would continue the tradition of the annual three-day rally of thousands of motorcyclists in the nation's capital for the 2020 Memorial Day.

Last year, Artie Muller, long-time leader of the Rolling Thunder rallies that rumbled through Washington for 32 years, cited escalating costs, stating that the 2019 rally would be the last, although local chapters around the country might sponsor their own events.

Via Twitter, President Donald Trump said he hoped the Rolling Thunder riders would somehow be back again for Memorial Day in 2020 and “hopefully for many years to come.”

Joe Chennelly, the national executive director of AMVETS, said last year that the organization was looking into the possibility of continuing the Rolling Thunder tradition. Last month AMVETS announced it had secured a permit from the National Park Service for a rally from May 22-24, 2020.

The 2020 events will be held to “to make the nation, especially our voters, aware of what is happening, what isn't happening and what needs to happen to address our POWs, our MIAs, and our veterans and active-duty service members who are dying by suicide,” Chenelly said in a statement.

The new event won't use the Rolling Thunder name. Instead, the rally will be called “Rolling To Remember.”