Pfc. Domingo Urioste Sr. was part of the wave of U.S. soldiers who landed at Utah Beach in the invasion of Normandy 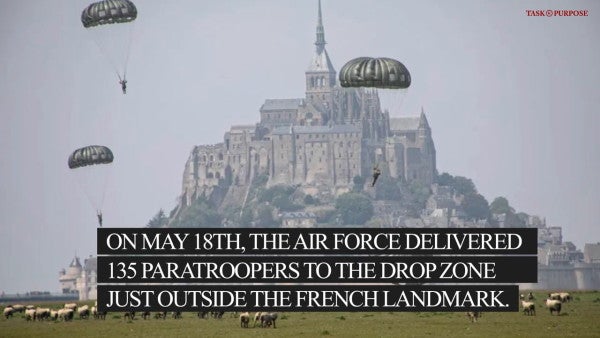 He was part of the wave of U.S. soldiers who landed at Utah Beach in the invasion of Normandy. Army records show that Urioste, a rifle sharpshooter and heavy machine gunner, also saw combat in Rhineland, Central Europe and Ardennes, better known as the Battle of the Bulge.

Somewhere along that trail of pain and death, Urioste pulled a large canister from a stream. His children aren't sure where this happened. Urioste was always tight-lipped about the war.

Inside the cylinder was Nazi Germany's red-and-white flag, emblazoned with a swastika. Urioste brought it home to New Mexico after his honorable discharge Oct. 30, 1945.

He stowed the flag for safekeeping in what his daughter, Lorraine, called the “the king's chair.” It had an uncommonly tall back and a chest beneath the seat.

What motivated him to hold on to the enemy's flag for the rest of his life is anyone's guess. Perhaps it was his most tangible reminder that Allied soldiers at Normandy and subsequent battles helped save the nation from dictators.

Lorraine Urioste, now 63, was a curious child when she pulled out the flag to inspect it. This brought a scolding from her mother, Lugardita, who didn't want her husband's wartime memorabilia to be disturbed or damaged.

Domingo Sr. and Lugardita died in the 1990s. Now Lorraine has taken possession of the flag from her brother, Domingo Jr., who's 78.

She considered what to do with a piece of linen and cotton so explosive that causes nerves to jangle and hearts to pound.

When she unfurled it for me, people who happened by did a double-take or asked why anyone would possess so menacing an item.

Lorraine, a law clerk in the state engineer's office, knows a symbol of Nazism can be viewed as evil or at least politically incorrect.

But she believes the flag should be displayed in a museum or other public setting devoted to the study of World War II.

There's another reason Lorraine hopes the flag can become part of a secure public exhibit on the war.

“Because of the political friction that is taking place now — I don't know if it's because Trump's in office — it kind of scares me that this could end up in the wrong hands,” she said.

Debates about displaying the Nazi flag for the purpose of education raged long before Donald Trump was elected president.

A history teacher at a middle school in Reno, Nev., ignited a controversy when she used the flags of the United States, Nazi Germany and Japan as props for a class on World War II. Most fellow teachers and students backed her methods, saying she made history interesting.

But the teacher received angry reactions from people living as far away as Alaska. One complained about a school “giving that hideous symbol of hatred and murder a place of parity with the American flag.”

The Ohio Historical Society faced similar criticism when it opened an exhibit that included a Nazi flag and a 1946 Cleveland Indians jacket with cartoonish team mascot Chief Wahoo holding a baseball bat. The historical society called this display “pieces we don't normally talk about.”

Having fought for his country and his life against the Nazi regime, Domingo Sr. had no affinity for the enemy. Perhaps the enemy flag was a reminder that he made it home from a war that killed or crippled millions of others.

He and his wife raised four children. Domingo Sr. supported the family as a truck driver and later as a custodian at DeVargas Center.

All the while, he held his secrets about World War II. By the time his children were old enough to ask about his service, he had mastered brevity.

Yes, he had been at Normandy, a turning point in the war, but he didn't care to recount it. By chance he found the canister containing the Nazi flag. He wouldn't elaborate.

His Army discharge record provides more details than he did. Typewritten and terse, it lists the major battles he fought in and his immunizations for smallpox and typhoid, giving equal space to each.

As for the Nazi flag, something stirred this brave man to keep it. His descendants say that's good enough for them. They will try to find a place for it that shows the war and Nazism in clear context.