Fort Bragg officials issued a warning on Thursday, about former Lt. Col. Anna Heres, who is reportedly armed and dangerous... 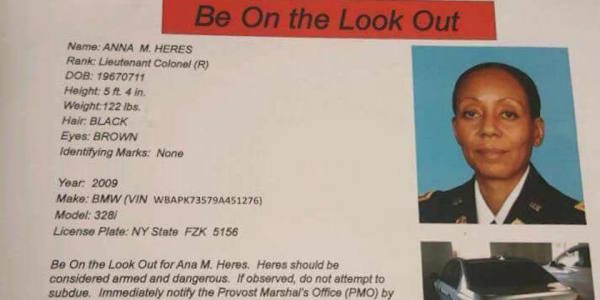 Fliers were posted on the military installation Thursday warning that Heres, 50, could attempt to enter the base and should be considered “armed and dangerous,” according tomultiplereports.

Heres was “recently separated from the military against her will and expressed homicidal intentions as an active shooter against Womack (Army Medical Center) and (Warrior Transition Battalion) staff,” according to the flier.

Heres is reportedly a former New York State Corrections officer and is “familiar with weapons.”

Heres is banned from the military installation, “but may seek entry through deceptive means and has done so in the past year.”

Heres is described as a black female, about 5 feet, 4 inches tall, about 120 pounds with black hair and brown eyes. She may be driving a silver 2009 BMW 328i with a New York license plate that reads “FZK-5156.”

Anyone who sees Heres is asked to call 911.