She Flew Helicopters In Iraq. Now She’s The Army’s Woman On The International Space Station

Anne McClain will be closer to her mother in Spokane, Washington, for the holidays than she’s been for most years... 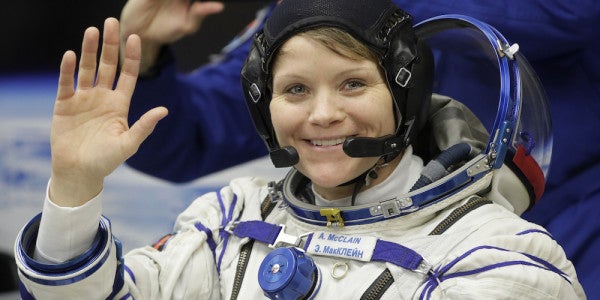 Anne McClain will be closer to her mother in Spokane, Washington, for the holidays than she’s been for most years since high school — depending on where in orbit the International Space Station (ISS) is.

The astronaut has spent most of her time since graduating from Gonzaga Preparatory School in 1997 thousands of miles away from home. To be exact, McClain was 2,600 miles from Spokane when she was studying mechanical and aeronautical engineering at West Point Military Academy and 7,000 miles away when she flew Army helicopters in Iraq.

On the ISS, where her crew docked earlier this month, she’s only a little more than 200 miles above Earth.

Some mothers might be terrified at the thought of their child going to space, especially after the Soyuz craft that was to carry a crew to the station failed and had to make an abrupt emergency landing in October. But McClain’s mother, Charlotte Lamp, already had sent her daughter off to war, and this paled in comparison. The former math and science teacher was confident in NASA’s engineering.

Lamp and her family were at the Baikonur Cosmodrome in Kazakhstan, about a mile and a half away from the Russian Soyuz rocket, for the Dec. 3 launch. When the rocket ignited, a giant ball of fire formed and began to shoot sideways. Lamp was grateful someone told her what to expect. She held her breath and began counting down from 10. From what she heard, if the rocket hadn’t left eight seconds after ignition, the situation was bad.

Right at 2, the rocket launched. Lamp let out her breath and watched in awe.

“It vibrates every molecule in your body,” Lamp said. “You can feel the Earth shake.”

McClain’s team, Expedition 58, arrived safely at the International Space Station about seven hours after takeoff. The facility will be their home for around six months, where and McClain and her teammates, Russian cosmonaut Oleg Kononenko and Canadian astronaut David Saint-Jacques, will conduct investigations in biology, Earth science, human health, physical sciences and technology development, according to NASA. McClain will participate in one of the first Tissues on Chips experiments to study the effects of reduced gravity on organ cells and tissues.

The research will allow scientists to better understand aging and may reveal how to slow it, according to the National Institutes of Health, a partner of the space station’s lab.

While Lamp’s situation is extraordinary, her concerns are not so different from those of other parents with children far away.

“We don’t get to just text all day with her. We can’t text. We have an email we can use, but it’s not quite the same,” she said. “And we can’t pick up the phone and call her. We’re kind of waiting for her to call us.”

Lamp had to end a phone interview abruptly because her daughter was calling from space. When Lamp called back, she said she was able to hear McClain’s smile through the phone. McClain told her mom how fun it was to float, although she’s had to learn to slow down so she doesn’t bump into walls.

McClain’s first view of space was a sunrise, which she told her mother was the most beautiful thing she’s seen. The space station makes 16 orbits around Earth daily, meaning the astronauts travel through 16 sunrises and sunsets per day.

“I am finally where I was born to be,” McClain said in a Dec. 7 tweet, her first since departing Earth.

Lamp insists McClain isn’t more special than anyone else, even though the 39-year-old astronaut has two master’s degrees — one in aerospace engineering as a Marshall Scholar and another in international relations — and a lengthy list of awards, including for her service in Iraq. She also happens to have been a member of the U.S. women’s rugby team.

On her first day of preschool, 3-year-old McClain looked up to her mother and said she was going to learn how to be an astronaut.

After that, “she just tried to be an astronaut every day of her life,” her cousin James Fitzmaurice said.

“I am finally where I was born to be”

When McClain was 9, she watched the movie “Top Gun” two or three times a day and dreamed of flying, until her brother took the tape and broke it over his knee, Lamp said.

Shari Manikowski, McClain’s high-school math teacher and softball coach, said she stood out as a student for her tenacity. When she got cut from the volleyball team in high school, she went out for soccer.

“What made her really stand out is she had an incredible amount of perseverance and grit,” Manikowski said.

When McClain was a senior, she tore ligaments in her ankle during a softball game, Lamp recalled. She wasn’t supposed to walk on that leg, and her doctor said it would take until her first day at West Point to heal. The doctor told her to use crutches at graduation, but in a “typical Anne” fashion, she walked across the stage of the Spokane Opera House with crutches nowhere to be seen, Lamp said.

McClain’s success has prompted celebration among Spokane residents, especially girls. There’s even been global response on social media to her accomplishment, Lamp said.

Students at Gonzaga Prep watched the launch and landing in class.

“It was interesting to have so many people in one room, but for it to be completely quiet,” said senior Ned McEwen, who wants to pursue military aviation.

Seattle-area students have also been inspired by McClain, including the second-grade class taught by Manikowski’s daughter at Bertschi School in Capitol Hill. Bekah Manikowski showed her students a video in which McClain talked about how her physical safety depends on her ability to do complicated math. She also showed a video of the Soyuz rocket failure from last month, so they could better grasp the risk McClain took.

“I heard audible gasps when we showed the Soyuz failure, as they recognized the magnitude of her success in the face of failure,” Manikowski said in an email. “Sure, they can’t yet describe that in their own words, but based on the dozens of hands with questions afterward, you can tell that the wonder and excitement of space exploration is not lost on them. “

Residents of Seattle, Spokane or anywhere can catch a glimpse of the International Space Station on most days when the sky is clear. The best viewing times can be found on NASA’s website.