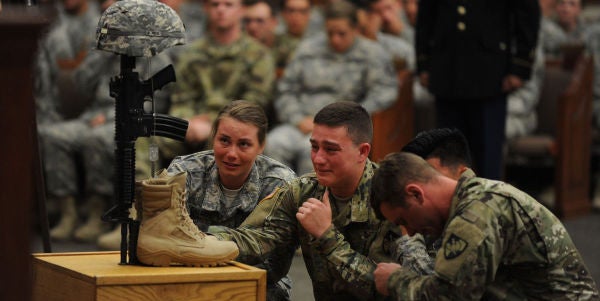 Just before 11 a.m. on June 2, 2016, at the tail end of a torrential rainstorm, Pvt. Tysheena James drove the military transport vehicle carrying 11 of her comrades to the edge of a water crossing. The truck was built to withstand 30 inches of moving water. Officials estimate the rain swollen Owl Creek was nearly three times as high.

Hours earlier, Fort Hood’s Installation Operations Command had issued an alert closing the crossing at Owl Creek and dozens of others throughout Fort Hood due to the historic rainfall, an alert that never reached the unit.

James, 21, had not been properly trained to drive the large troop carrier, especially in adverse conditions. In fact, investigators would later learn, the unit lacked a formal driver training program, a requirement of Army regulations.

At James’ side was Staff Sgt. Miguel Colon Vasquez, 38,an experienced “Master Driver” leading the training patrol. Army officials say it was Colon who made the decision to try to cross Owl Creek, even though a functioning bridge was just about 200 feet away.

James pushed ahead into the water and within seconds, witnesses said, the truck overturned and was carried away downstream. Nine of the 12 soldiers, including James and Colon, drowned in one of the deadliest training accidents ever for the U.S. military.

According to copies of the Army’s investigatory report on the accident, obtained by the American-Statesman through a Freedom of Information Act request, investigators pinned blame on Colon and a series of his decisions, including his seemingly inexplicable choice to try to cross the creek, in apparent defiance of his platoon leader’s order.

The Army investigator recommended letters of reprimand against the unit’s company commander, platoon leader and platoon sergeant, who he said were aware that soldiers, including James, had inadequate training to drive Army convoy vehicles. One leader, who wasn’t named in the report, was singled out for creating a climate of “safety complacency.”

Because the discipline amounted to administrative action, Fort Hood officials said they couldn’t confirm if the letters were issued. Such letters “can call soldiers’ attention to their deficiencies and give them an opportunity to correct them before more severe measures are required,” Fort Hood officials have said in the past. The names of the unit leaders weren’t released.

Investigators found that few soldiers had taken or even knew about Fort Hood’s local hazards instructional course. Taking that course is a requirement for young soldiers when they arrive at the installation, and it includes information on flash floods in Central Texas creeks. For at least a month, a time period that included James’ arrival at Fort Hood in late April 2016, the link to the online course was broken, investigators found. The report also noted that the certificate of completion could be printed from the internet without actually taking the class.

“I’ve never seen or heard of the local hazard course due to it never being disseminated down the chain,” one soldier told investigators. Others described the unit’s haphazard approach to driver training for large military vehicles.

Fort Hood officials said that since the accident they have “reinforced” to all unit commanders that soldiers under the age of 26 are required to take the Army’s intermediate drivers course. They said the local hazards course had been updated to include additional guidance on low water crossings.

“Fort Hood leadership remains engaged with all of our soldiers to ensure safety measures are part of everything we do in accident prevention actions,” said Fort Hood public affairs director Tom Rheinlander in a statement.

The report also found lapses in how Fort Hood communicates flash flood and road closing alerts to soldiers. Fort Hood’s Installation Operations Center issued an initial report at 5:05 a.m. closing crossings like the one at Owl Creek to vehicle traffic. The flooding warning was sent to brigade safety officers at 9 a.m. via email, but never made it to the company before the convoy left the motor pool at 10:20 a.m.

Investigators also recommended Fort Hood consider installing early warning flood systems at all of its crossings. According to the report, several years ago Fort Hood had sensors at six high-risk low water crossings that were later abandoned because of cost. It wasn’t clear Friday if Fort Hood would pursue such a system.

Investigators didn’t fault Army officials for staging the training maneuver during a flood event. “Units can expect to conduct convoys in inclement weather, so the training event should have continued despite the heavy rain,” the report found.

With Colon, a veteran of deployments to Iraq and Afghanistan, sitting next to her, James drove lead on a convoy of four trucks and 18 soldiers on a mission to simulate an ammunition drop deep into Fort Hood’s expansive training area.

The patrol was designed to give the unit’s junior soldiers better experience in convoy operations, yet investigators found the unit regularly provided inadequate driving training to those young soldiers. For example, investigators learned that Colon improperly gave James an Army driver’s license even though she hadn’t completed all the requirements to obtain one.

The report concluded that three decisions by Colon led to the “preventable” accident. The investigation found that Colon first decided to take the convoy off a paved road and onto a parallel unimproved tank trail. According to one soldier in the company, Colon went off the paved road “because we were trying to familiarize soldiers with all types of terrain.”

Colon was also faulted for continuing on the trail after passing through a puddle deep enough to cause rainwater to flow into one of the vehicles. And finally, Colon elected to have James try to pass through the water crossing on Owl Creek despite the rushing floodwaters and the availability of a nearby bridge above the creek.

That “was a high risk decision that far exceeded the decision authority of any leader of the patrol,” the report said.

But while Colon’s platoon leader told investigators that he told the staff sergeant to avoid low water crossings, the patrol didn’t have “tactical communications” with its leaders back at headquarters, who regardless hadn’t received the alerts closing low water crossings before the accident.

Colon’s wife, Ngo Pham, told The Dallas Morning News, which first reported elements of the Army’s investigation in May, that Colon was following protocol and had suggested altering the training because of the poor weather.

A 2016 Statesman investigation found that reported accidents were rising at Fort Hood even before the June 2 accident, hitting a 10-year high of 109 in 2015. The numbers rose even as the population of active-duty soldiers has fallen by about 20 percent since 2011.

Fort Hood officials said the accident rate is largely tied to the rhythm of wartime deployments and also pointed to better online reporting tools for accidents since 2011.