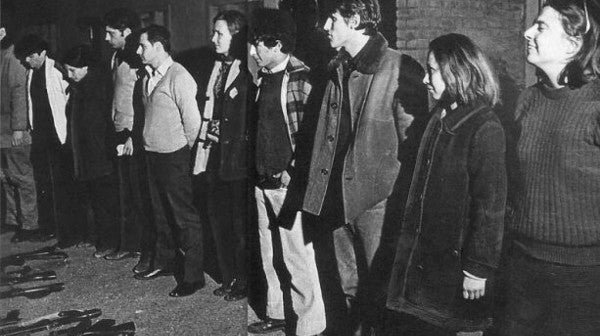 For years, a former Argentine naval officer was living in a $1 million waterfront home with a pool and dock in the Sans Souci Estates neighborhood of North Miami.

At 7 a.m. Friday, U.S. Marshals Service deputies knocked on his door and took him into custody to send him back to Argentina over a massacre he's accused of leading nearly 50 years ago.

Roberto Guillermo Bravo, 77, faces 16 aggravated homicide and three attempted aggravated homicide charges for his alleged role in the Aug. 22, 1972, massacre at an Argentine Navy base in Trelew. Bravo is accused of participating in the fatal shootings of 16 prisoners and in the attempted killings of three other inmates who all opposed Argentina's military government in the early 1970s.

Bravo has faced — and overcome — Argentina's extradition request by the U.S. State Department in the past. In 2010, a federal magistrate judge, Robert Dube, declined to certify the country's petition. But since that time, Argentina's extradition case has become stronger, according to a new complaint unsealed in Miami federal court on Friday.

“Notably, the trial court and appellate court's findings rejected several legal and factual defenses raised by Bravo during his prior extradition proceeding, including his claim of statutory amnesty, prior acquittal in a military inquiry, and the purported lack of credibility of the survivors' statements,” according to the complaint filed by the U.S. Attorney's Office in Miami.

Bravo, who has owned both a home and business in North Miami since 2011, is being held in the Federal Detention Center as he awaits his extradition hearing before Magistrate Judge Edwin Torres on Monday.

According to the extradition complaint, 25 prisoners affiliated with groups opposed to Argentina's de facto military government escaped from the Rawson Penitentiary in Chubut Province on Aug. 15, 1972. Of those, 19 were recaptured and taken to the Almirante Zar Naval Air Base in Trelew, Argentina.

During their incarceration there, Bravo was a lieutenant in Argentina's Naval Infantry Battalion No. 4 at the base.

“Bravo and other naval officers at the base subjected the prisoners to increasingly harsh punishment during their detention,” the extradition complaint says.

According to one survivor of the massacre, “Bravo was the officer who treated the prisoners most aggressively. He would make the prisoners lie on the floor completely naked for long periods of time.”

A second survivor recalled “Bravo holding a loaded pistol to the head of one of the prisoners … while threatening to kill her because she refused to lie on her back on the floor.”

A third survivor “overheard Bravo telling a subordinate that instead of feeding the prisoners, they should kill them.”

In the early morning of Aug. 22, 1972, all 19 prisoners at the Argentine Naval base in Trelew were sleeping when Bravo and four other officers arrived with machine guns and .45-caliber pistols.

“The officers ordered the prisoners to stand in a line outside their cells with their heads down,” according to the extradition complaint, based on evidence from Argentine authorities. “Moments later, the naval officers shot at them from a close distance.

“Many of the prisoners were killed instantly from this initial round of gunfire,” the complaint says. “The naval officers then proceeded to discern whether there were any survivors and attempted to execute them. Bravo located several prisoners who did not die in the initial salvo and used his pistol to shoot .”

Three of the 19 prisoners survived the massacre and became key witnesses.