Sen. McSally said she told Air Force leaders she "would not allow their plan to mothball 44 A-10s starting in October to happen." 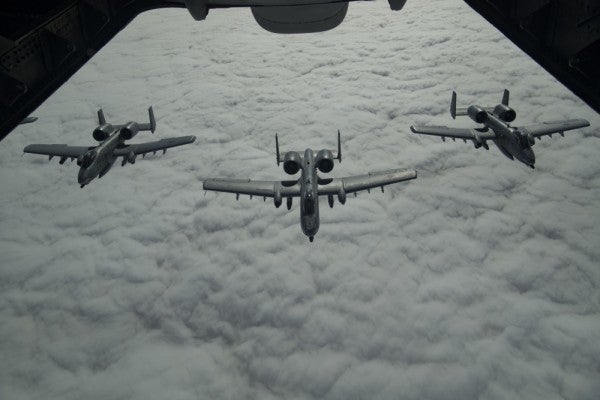 “The Air Force sustains our commitment to the Air Force's most effective close-air-support platform, the A-10, with $161 million to continue the re-winging and avionics upgrades,” said Maj. Gen. John Pletcher, deputy assistant secretary for financial management and comptroller, during the Feb. 10 briefing.

“We're also continuing on the path we set last year to retire 44 of the oldest and least-ready aircraft en route to a completely modernized and combat-capable fleet of 218 A-10s — in seven squadrons — that will continue to fly through the 2030s,” Pletcher said.

Members of Congress, including then-U.S. Rep. McSally and late U.S. Sen. John McCain, beat back that plan and helped push through funding to replace wings on A-10s that would otherwise reach the end of their service life.

McSally, who sits on the Senate Armed Services Committee, said in a statement that she met with Air Force leaders “to tell them point blank that I would not allow their plan to mothball 44 A-10s starting in October to happen.”

“It was the honor of my life to command an A-10 squadron in combat and I know firsthand that the A-10 provides one-of-a-kind close air support that saves lives,” McSally said in a prepared statement. “I fought and won to keep the A-10 from being mothballed when I first came to Congress, and because of my efforts working with Senator McCain and others, the A-10 will now fly into at least the 2030s.”

Kirkpatrick, who sits on the defense subcommittee of the House Appropriations Committee, said she plans to introduce a resolution asking Congress to continue funding the A-10.

“I am actively engaging with the Air Force to ensure that there is no negative impact to our squadrons at D-M,” Kirkpatrick said in a statement.

Kirkpatrick said her resolution recognizes the A-10 as “a critical component of America's national security and the most effective and cost-efficient close-air-support aircraft currently in the (Department of Defense's) inventory.”

Davis-Monthan is home to the nation's biggest contingent of A-10 “Warthogs,” with one combat squadron, an active-duty training unit and an Air Force Reserve training squadron comprising about 60 planes overall.

Designed as a Cold War-era tank killer built around a rapid-fire cannon, the A-10 won praise for its role in close air support in the Middle East.

The Air Force deactivated 18 A-10s, including nine at D-M, and put them into “backup inventory” status in 2015.

Also in 2019, Boeing was awarded a new contract worth up to $999 million to install 112 new wing assemblies, but that depends on incremental appropriations.