Troops are withdrawing from the US-Mexico border. Not the Arizona National Guard

While National Guard troops sent to the border are withdrawing in other states, Arizona Gov. Doug Ducey says those here will remain 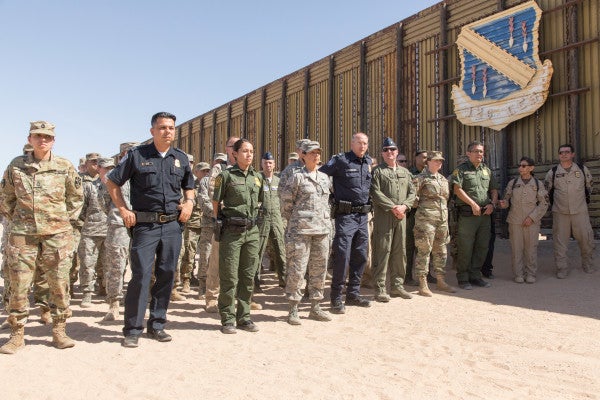 While National Guard troops sent to the border are withdrawing in other states, Arizona Gov. Doug Ducey says those here will remain.

“Arizona's National Guard members continue to serve as a force multiplier along our border — surging more badges to the border in the face of continued threats from drug smugglers and human traffickers,” Ducey's spokeman Patrick Ptak said in an email. “The governor appreciates their continued efforts to protect the safety and security of our communities.”

The Arizona National Guard has about 600 soldiers and airmen serving in Operation Guardian Support. That's in addition to about 650 active-duty troops also assisting Customs and Border Protection — down from the 1,500 originally deployed in the beginning of November.

On Monday, California Gov. Gavin Newsom, a Democrat, announced he was pulling back most of the state's National Guard troops on the border.

“This whole thing is the theater of the absurd and California has had enough,” he said, according to The Associated Press.

Newsom said he still plans to allow 100 of about 360 state troops deployed to keep working with CBP because he recognizes some are doing good work fighting drug crimes, according to the AP.

“I'm trying to acknowledge there are some legitimate concerns but I'm not going to play into the hype and the politics,” he told reporters.

His announcement followed a decision by New Mexico Gov. Michelle Lujan Grisham, also a Democrat, to withdraw most of that state's troops.

On Feb. 5, Lujan Grisham said about a dozen of the 118 troops would remain to assist with humanitarian needs in a remote corridor where a lot of families are turning themselves in to Border Patrol agents.

“New Mexico will not take part in the president's charade of border fear-mongering by misusing our diligent National Guard troops,” Lujan Grisham said.

Defense Secretary James Mattis on April 8 authorized up to 4,000 National Guard troops to deploy to the U.S. border with Mexico to support CBP. The mission, officials said during a press conference in Nogales in May, was to get more agents and officers on the ground.

That day, they showed reporters troops helping care for horses and working on vehicles. Others were tasked with aviation missions and surveillance.

Across the U.S.-Mexico border, the projected cost of the National Guard deployment is $550 million through the fiscal year, Department of Defense officials said at a Jan. 29 congressional hearing. That's in addition to the $132 million that has been spent on active-duty military on the border so far. Officials said they couldn't estimate the full fiscal year cost yet.

There are about 2,300 active-duty troops currently deployed, down from 5,900. Last month, the Pentagon announced it was going to send an additional 3,500 to the border.

SEE ALSO: A Timeline Of The National Guard's Deployment To The US-Mexico Border Under Trump

WATCH NEXT: The Reality Of A Border Deployment