Months before the Trump administration called for Guardsmen to be sent to the U.S.-Mexico border, an Arizona Air National Guard... 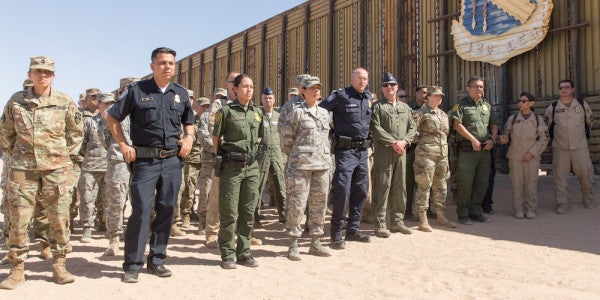 Months before the Trump administration called for Guardsmen to be sent to the U.S.-Mexico border, an Arizona Air National Guard plane flew toward a suspected mountainside cartel scout site on the Tohono O’odham Reservation.

The suspected scouts fled as the plane and a U.S. Customs and Border Protection helicopter approached, allowing Border Patrol agents to make two arrests, according to a criminal complaint filed in December in U.S. District Court in Tucson.

While large-scale deployments of the National Guard to the border in 2006, 2010, and 2018 periodically spark discussions of the military’s role on the border, federal court records and state reports show the Arizona National Guard has played a quiet role in border enforcement for nearly three decades.

In recent years, the main role of the National Guard on the border has been aerial reconnaissance and operating surveillance cameras for CBP, according to annual reports from the Arizona Department of Emergency and Military Affairs, which oversees the Arizona National Guard.

More than a year before the National Guard plane helped Border Patrol agents arrest the two suspected scouts on the reservation, a National Guard aircraft reported a suspicious vehicle north of Portal near the New Mexico border.

Agents caught up with the vehicle and found 240 pounds of marijuana, which the driver said he intended to deliver to Tucson, according to an August 2016 criminal complaint.

And a National Guard member ran surveillance cameras in Nogales that recorded the fatal cross-border shooting of a 16-year-old Mexican boy in 2012, according to testimony at the recent trial of Border Patrol Agent Lonnie Swartz, who was acquitted last month of a second-degree murder charge in the federal trial.

The longest-running National Guard role on the Arizona-Mexico border is the Counter Drug Task Force, one of many similar task forces around the country, according to annual reports from the department of emergency and military affairs.

In the past six years, the task force assisted in the seizure of $700 million in drugs and related assets, such as currency and vehicles, and helped make at least 3,000 arrests, the annual reports show.

Prior to 2012, the annual reports note the existence of the task force, but do not include information on staffing, funding, or activities.

Although details are scarce in the annual reports prior to 2012, Brig. Gen. Jose Salinas, director of joint staff at the department of emergency and military affairs, testified to the House Committee on Homeland Security in 2012 that the task force began in 1989 and was staffed with more than 300 National Guard members in the early 1990s.

In his testimony, Salinas urged Congress to provide consistent funding to the task force and reiterated testimony from 2011 by Arizona Adjutant General Maj. Gen. Hugo Salazar, who said, “Military support of law enforcement would be best-served by increased funding to the Joint Counter Narco/Terrorism Task Force in lieu of temporary border security missions like Operations Jump Start and Phalanx.”

Alongside the task force, Arizona National Guard members work on the Southwest Border Mission, the moniker for a multi-state National Guard effort to support law enforcement on the border, according to the annual reports.

The reports show the mission in Arizona includes National Guard members assigned to Operation Phalanx, the 2010 deployment under the Obama administration.

Operation Phalanx began with troops deployed on the ground, but transitioned to aerial reconnaissance about two years later.

In the 12 months prior to the 2016 report, Guard members from nine states working with the Southwest Border Mission flew more than 220 missions in Arizona in UH-72 helicopters, helping to detect about 900 border-crossers and the seizure of more than 9,000 pounds of drugs.

The annual reports list Operation Phalanx, a ground-reconnaissance mission with 1,200 National Guard members begun in 2010 under the Obama administration that transitioned to aerial activities for CBP about two years later, as part of the Southwest Border Mission.