"I know that my dad is now resting in peace on this particular issue." 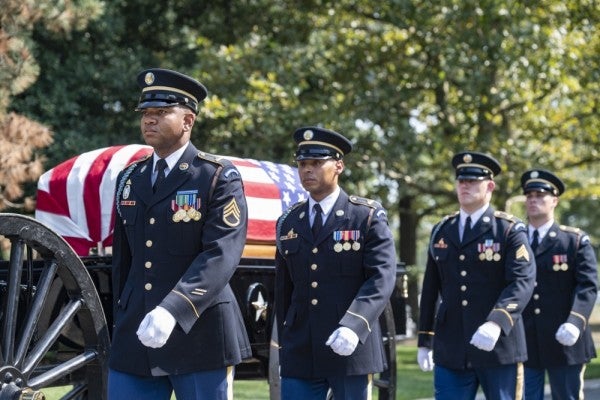 Army Pfc. Robert Fletcher restarted his life in Ann Arbor after the Korean War, the trauma of combat and captivity never far from his mind. He'd survived nearly three years of extreme hunger, freezing temperatures and psychological abuse as a prisoner of war in Camp No. 5 along the banks of the Yalu River that divides China and North Korea.

Back home, Fletcher's harrowing experience manifested itself as a myriad of health problems and severe PTSD that cropped up daily until his death at age 85. And so it shocked his family to learn he wouldn't be afforded full military honors when laid to rest at Arlington National Cemetery in 2018.

Fletcher was eligible for burial at the famed military cemetery by virtue of being a former POW, but his rank didn't qualify for a horse-drawn caisson, an escort platoon and a band. Those honors were reserved for officers and service members killed in action.

It felt like a “huge slap in the face and kick in the teeth” to his daughter, Kanda Fletcher. Her family had long assumed her father had earned full military honors. He and his comrades came close to dying for their country; Fletcher returned from the Korean War weighing 90 pounds less than when he enlisted as a healthy 17-year-old.

“I know what my dad went through,” said Kanda Fletcher, 55, who lives on her family's farm in Ann Arbor. “I saw it every single day.”

The daughter waged a 20-month campaign to convince Congress to change the policy, resulting in a recent amendment with the potential to affect thousands of enlisted veterans across the country.

All former POWs and Medal of Honor recipients can now receive full military funeral honors at Arlington, regardless of their rank. The measure was included in the National Defense Authorization Act signed by President Donald Trump on Dec. 20.

“I couldn't be happier. It's just amazing,” Kanda Fletcher said last week, a wide smile across her face. “Does it benefit my dad? No, because we can't go back and get the full burial for him, but I know that my dad is now resting in peace on this particular issue.”

Robert Fletcher dropped out of high school in Ypsilanti just before graduation to enlist in the Army in May 1950. He joined the 24th Infantry Regiment, a unit of black enlisted soldiers and mostly white officers.

The Buffalo Soldiers fought along the Korean Peninsula until November 1950, when they ran out of food and ammunition and were captured by North Koreans and later turned over to the Chinese. Fletcher remained a prisoner of war until August 1953.

In a then-segregated Army, it would've been next to impossible for Fletcher to advance his rank. That reality angered Kanda Fletcher when a funeral home director relayed that full-honor burials at Arlington were restricted to officers and those killed in action. It stung that officers who didn't see combat could receive the honor but her father, an enlisted service member, could not.

“I'm not denigrating Arlington or our armed forces, but that's not right,” she said.

Robert Fletcher was buried at Arlington in 2018 with standard honors: a casket team, a firing party, a bugler and a chaplain.

By then, Kanda Fletcher had already started speaking out about the policy she perceived as unfair. She was featured in an article in the military publication Stars and Stripes, and then her cause drew support from several members of Congress.

Then-U.S. Rep. Mike Bishop, a Michigan Republican from Rochester, introduced the Full Military Honors Act of 2018, saying in a news release that he was “shocked” to find out that Robert Fletcher was denied a full-honors burial solely because of his enlisted rank.

Kanda Fletcher worked closely with Panetta's office, tracking the bill's support. For weeks, she allotted two hours each morning to write letters to nearly every one of the 435 representatives in the House.

“She was a fantastic partner. (We) could not have asked for someone more dedicated to an issue and more tenacious — I mean that in a very, very positive way,” said Matthew Manning, Panetta's legislative director. “This is important to her, and we wanted to be of service and help carry it forward.”

Kanda Fletcher said she garnered a lot of support, but she also came across naysayers, including a veterans service organization that told her she was wasting her time.

'You matter, regardless of rank'

Panetta's bill was folded into the defense authorization act for fiscal year 2020. The amendment extends full military honors to veterans awarded the Medal of Honor or the prisoner of war medal, who in the past weren't eligible because of their rank.

The exact number of POWs living in the United States isn't known.

The Department of Veterans Affairs said there were 5,071 former POWs living in the United States as of August 2017, but that number didn't capture those not in the VA system, Stars and Stripes reported.

“We say our veterans are very important,” Kanda Fletcher said. “What better way to tell these men, 'You matter, regardless of rank.' “

Robert Fletcher spent the final decades of his life sharing his story at schools and veterans events across the country. He advocated for former POWs. He was the first veteran of color to serve on the Advisory Committee on Former Prisoners of War, his daughter said — a post he held for more than 20 years. His obituary credits the committee with bringing about the recognition of many mental and physical problems as service-related disabilities.

Kanda Fletcher views her recent accomplishment as a continuation of her father's legacy.

The pang of heartache over her father being denied honors remains. She hopes to travel to Arlington one day to attend a former POW's funeral service. Seeing an enlisted service member receive full military honors, and knowing she played a role in it, might ease some of her pain, she said.