Medal of Honor recipients and prisoners of war are entitled to burial with full honors at Arlington National Cemetery, regardless of rank, under the 2020 National Defense Authorization Act signed into law last week by President Donald Trump 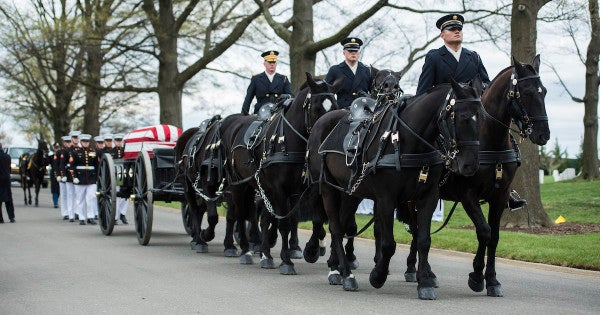 Medal of Honor recipients and prisoners of war are entitled to burial with full honors at Arlington National Cemetery, regardless of rank, under the 2020 National Defense Authorization Act signed into law last week by President Donald Trump.

As of Dec. 20, when Trump signed the bill into law, the service secretaries must provide burials with full military honors to enlisted recipients of the Medal of Honor or the prisoner-of-war medal who in the past were “not entitled to full military honors by the grade of that veteran.''

According to the Department of Veterans Affairs, there are at least 5,000 living former enlisted and officer POWs. The Congressional Medal of Honor Society lists 71 living MoH recipients of all ranks.

Kanda Fletcher, daughter of Korean war POW and Army Pfc. Robert Fletcher, championed the cause of treating enlisted POWs and MoH recipients the same as officers at Arlington with full military honors, including a horse-drawn caisson, a band and marching element.

Her father was buried at Arlington with minimum honors — a casket team, firing party, a bugler to play “Taps” and a chaplain.

She told Stars & Stripes, “I could only move forward and try to ensure that this didn't happen to too many other people.”

In February, Rep. Jimmy Panetta, D-California, son of former Defense Secretary and CIA Director Leon Panetta, sponsored a bill for full military honors at Arlington for POWs and MOH recipients; it was included as an amendment to the NDAA signed by Trump.

“Full military honors ceremonies remind us of the service & valor demonstrated by those who have defended, protected, and sacrificed for freedom & democracy,” Panetta said in a tweet at the time.

Rep. Dan Crenshaw, R-Texas, a co-sponsor of the bill and a former Navy SEAL lieutenant commander who lost his right eye in Afghanistan, said in a statement at the time that “Valor holds no rank.”

In his final year in Congress in 2018, Rep. Sam Johnson, R-Texas, then age 87 and a legendary Air Force fighter pilot in Korea and Vietnam and a former prisoner of war in Vietnam, lobbied to give enlisted Medal of Honor recipients and POWs the same honors as officers in burials at Arlington.

“My fellow POWs who served honorably demonstrated the utmost patriotism, but not all of them were eligible for full military honors at their burial, simply due to their rank. I believe this is wrong,” he said in a statement.