Arlington National Cemetery is tightening security amid tensions with Iran

Arlington National Cemetery is tightening its security protocols and warning visitors to report suspicious activity in the wake of a U.S. strike that killed Gen. Qasem Soleimani, head of Iran's elite Quds force 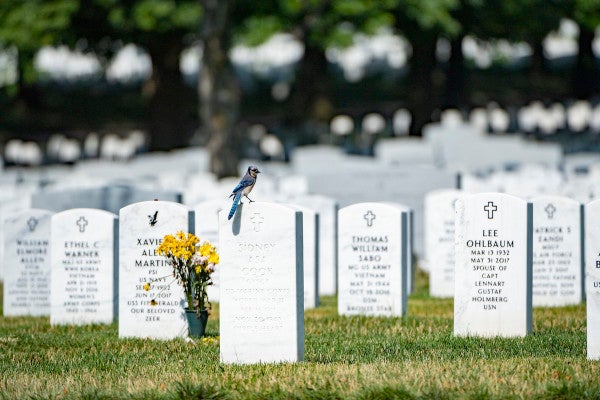 Arlington National Cemetery is tightening its security protocols and warning visitors to report suspicious activity in the wake of a U.S. strike that killed Gen. Qasem Soleimani, head of Iran's elite Quds force.

In a series of tweets Friday afternoon, Arlington staff announced that the cemetery, located by the Pentagon and across the Potomac from Washington, D.C., is implementing 100% identification checks at all entrances.

“Effective immediately, all visitors 16 years and older (pedestrians, drivers and passengers) must present a valid state or government issued photo identification upon entering the cemetery,” cemetery staff said in tweets. “Visitors include all funeral attendees, tourists, and personnel on official business.”

Officials later told Military.com they had adjusted the policy slightly, allowing visitors ages 16 and 17 to present a school-issued ID for entry.

“We ask for your patience as this will create longer than usual delays,” Arlington officials said. “Cemetery officials are reminding all visitors to add a few extra minutes to their travel times when visiting the cemetery.”

Any suspicious activity, they added, should be reported to the watch desk at adjoining Joint Base Myer-Henderson Hall.

The tweets referenced current conditions, but did not refer directly to Thursday night's decapitation strike that killed Soleimani in Baghdad. Many, including U.S. lawmakers and defense experts, expect Iran to retaliate following the strike.

Reached for comment, a public affairs official with Arlington said additional information will be forthcoming about the change in posture.

It's not unheard-of for the cemetery to increase its security measures in light of current events. In 2016, the cemetery started bag checks and ID screening for drive-in visitors as part of a broader Army security ramp-up in the wake of the 2015 Chattanooga shootings that left four Marines and a sailor dead. And in 2014, Arlington added more security to its famed Tomb of the Unknown Soldier after a shooting attack the same year in Ottawa, Canada.

It's not clear whether the new security measures are designed to be temporary or long term.

While the heightened security protocols may create delay for families of the fallen attending funerals or visiting gravesites, the founder of Tragedy Assistance Program for Survivors, an organization that supports these families, said she understands the intent behind the change.

“We care about security and we appreciate that the Army is protecting all those who enter Army facilities, including Arlington national cemetery,” Bonnie Carroll said in a statement to Military.com. “We'll be working officials to make sure families can visit loved ones while respecting security. Families just need to have as much information as possible so that they are prepared.”