With the help of Turkish and Israeli drones, Azerbaijan enjoys crucial air superiority over the battlefield. 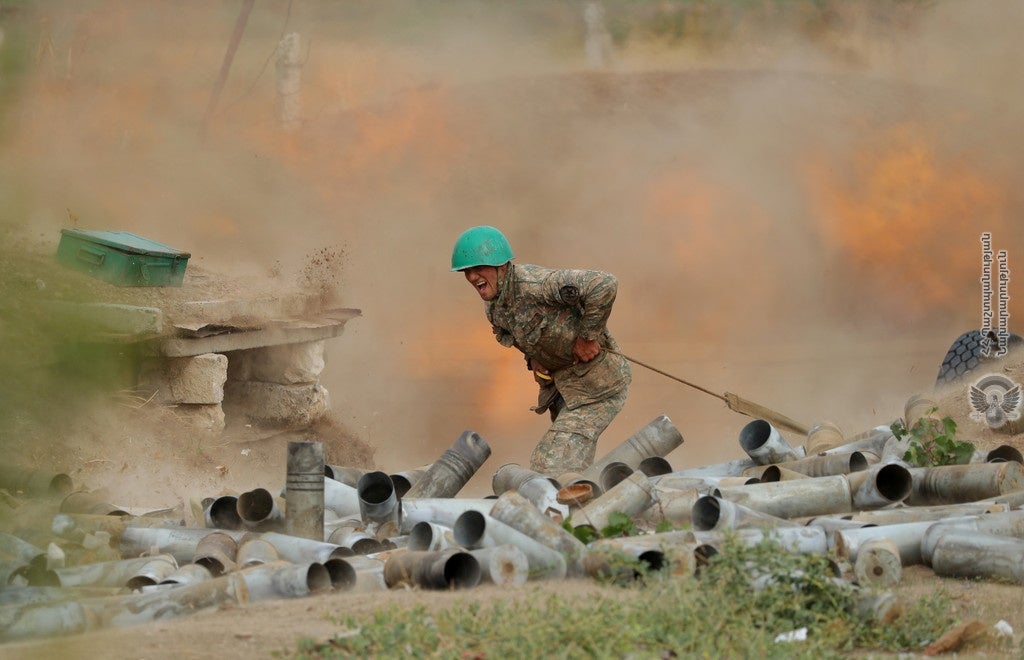 On Sunday, a territorial dispute between Armenia and Azerbaijan reignited and is now threatening to engulf the whole region.

A remnant of the Soviet Union’s collapse, the autonomous Nagorno-Karabakh region is within Azerbaijan but has a predominately ethnic Armenian population and leadership.

This is not the first time that the two neighbors have clashed over the contested territory, and both sides claim the other started this round, but the fighting now is the most intense since the war of 1988-1994. Reports indicate that hundreds of people have been killed, including civilians, and hundreds more wounded.

Additionally, what makes the clashes more dangerous this time is the overt and covert involvement of two U.S. allies and one competitor, namely Turkey, Israel, and, albeit indirectly, Russia.

Turkey is an ally of Azerbaijan, while Armenia enjoys the support of Russia, which has a military base in the country.

Armenia is also a member of the Moscow-led Collective Security Treaty Organization (CSTO), a rough equivalent to NATO. To complicate matters more, Russia has good relations with Azerbaijan going back to their common Soviet past.

What interests most third parties in this dispute is the security of the numerous oil and natural gas pipelines that slither from the Caucasus to Europe. Azerbaijan alone exports about 700,000 barrels of oil and close to 780 million cubic feet of gas a day, most of it going to the West. Some of those pipelines are perilously close to the Armenian border.

Wary of an escalation and what it could bring, the U.S. State Department has warned that the “participation in the escalating violence by external parties would be deeply unhelpful and only exacerbate regional tensions.”

On the other hand, as retired U.S. Navy Adm. James Stavridis wrote this week, NATO has had little influence over the two contesters. This is Russia’s sphere of influence.

Drones sold to Azerbaijan by Israel and Turkey are proving the bane of the Armenian military. The Azeris are using the drones to great effectiveness in strike, reconnaissance, and intelligence-gathering functions.

Footage emerging from the conflict shows the deadly effectiveness of the Azeri drones. In one instance, close to 30 Armenian soldiers had congregated around a logistics truck when a drone missile struck, killing and wounding several men and annihilating the truck.

Numerous other clips released by the Azeri Ministry of Defense show drones striking artillery and anti-aircraft pieces at will.

The IAI Harop in particular is proving quite effective. A loitering munition, also known as a “suicide drone,” it homes in on radio transmissions, such as those from anti-aircraft or rocket artillery batteries, and attacks the source. It can be directed from the ground or fly completely autonomously, and its stealthy profile makes it a hard target.

The Azeri drones have steadily dismantled the anti-aircraft umbrella protecting Armenian positions and now are targeting artillery positions and supply convoys with near impunity. With the direct and indirect help of Turkey and Israel, Azerbaijan enjoys crucial air superiority over the battlefield.

But Azerbaijan can count in more than drones to get an upper hand in the conflict. Turkey is helping Azerbaijan by sharing intelligence, offering logistical assistance, and providing limited air support. (Armenia is claiming that a Turkish F-16 fighter jet shot down an Armenian Su-25 aircraft, though Ankara has denied it.)

Crucially, however, Turkey has also sent Syrian mercenaries to fight alongside and support Azeri troops.

Turkey is no stranger to employing mercenary troops to further its agenda. According to the U.S. State Department, Ankara has deployed close to 4,000 Syrian mercenaries, some of them former ISIS fighters, to Libya in support of the Government of National Accord (GNA).

Drones and Turkish assistance tipping the scale in favor of Azerbaijan might cause Russia to take an active role in the conflict.

It’s in Russia’s interest to maintain a balance of power between the two combatants, as Moscow would see a change that benefits Turkey or another rival as harmful to its standing in the region. If Turkish support offers Azerbaijan an edge in the conflict, and any political and diplomatic overtures fail, then Moscow might step in on the side of Armenia.

Russia can do that without committing troops to the fighting.

For example, it could reiterate its security guarantee, using its forces to help defend Armenia proper – Moscow doesn’t extend that guarantee to the disputed region – and thereby allow the Armenian military to redeploy more and better anti-aircraft systems to the contested region to deal with the Azeri drones. Additionally, it could authorize emergency sales to Armenia of weapons tailored to deal with Azeri air superiority.

Moreover, Moscow may very well use this opportunity to stretch Turkey financially and militarily.

The Kremlin is already in direct or indirect confrontation with Ankara in Libya and Syria. Russian President Vladimir Putin might find the opportunity to further destabilize the shambling Turkish economy, and thus end the country’s neo-imperial aspirations, too tempting to ignore.