The Army’s Body Armor May Be Too Heavy For Soldiers In Combat, Report Finds

Editor’s Note: This article by Matthew Cox originally appeared onMilitary.com, the premier source of information for the military and veteran community. The... 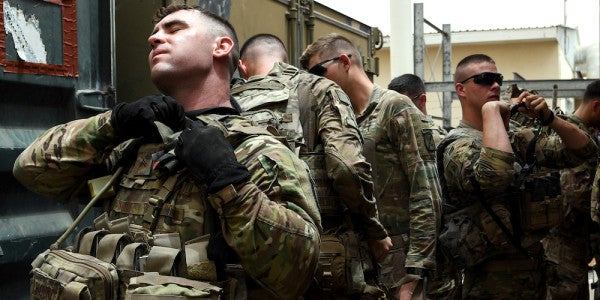 “Body armor provides increasingly advanced protection, but at a cost in soldier performance,” according to “The Soldier's Heavy Load,” part of the “Super Soldiers” series of reports that Army Research Laboratory commissioned CNAS to conduct looking at soldier survivability.

“Increased soldier load not only slows movement and increases fatigue, but also has been experimentally demonstrated to decrease situational awareness and shooting response times,” the report added.

The document draws on past reports that have estimated soldiers routinely carried an average of 119 pounds apiece in Iraq and Afghanistan. As a result, one-third of medical evacuations from the battlefield between 2004 to 2007 were due to spinal, connective tissue, or musculoskeletal injuries — twice as many injuries as were sustained from combat.

The authors of the report make several recommendations to the Army, one being that the service should “clearly delegate authority to company-level commanders to modify the level of protection as needed, based on the specific threat and mission.”

“Wearing heavy body armor may not be operationally practical on a long-range multi-day patrol in mountainous terrain, such as in Afghanistan,” the report states. “In practice, the decision of which protective level to wear is usually restricted to senior leaders.”

Army researcher James Zheng added in the report that “body armor is essentially parasitic weight; it contributes nothing to the soldier's operational effectiveness until the moment it is required to resist a potentially lethal threat.”

Paul Scharre, one of the authors of the report, told Military.com that commanders were concerned “not just that they were going to get heat from higher up, but the Army is going to get dragged before Congress, saying 'why aren't our people wearing this body armor.'”

“We issue protective equipment, and that is great, because body armor is effective and saves lives, but it's also extremely heavy. It takes up a significant fraction of the weight that soldiers can effectively carry,” Scharre said.

PEO Soldier declined to comment on the report because it was produced for Army Research Laboratory, but pointed out that last year it announced last plans to field the Modular Scalable Vest — part of the larger Soldier Protection System, or SPS. That vest at its heaviest weighs approximately 25 pounds, which is five pounds lighter than the IOTV.

“The SPS system is modular, scalable, and tailorable,” Alton Stewart, a spokesman for PEO Soldier said in a statement. “It defeats current threat levels while also reducing weight.”

The report also relies on a graphic that provides inaccurate weights of individual soldier equipment, stating, for example, that the “Army Combat Helmet” weighs 6.5 pounds.

Scharre said an earlier Super Soldiers series report released in April covered these newer body armor efforts, such as how the Army in 2009 “reduced weight with the plate carrier and the Army's current goal with the Soldier Protection System.”

“No, we don't talk about that; I am actually not familiar with it. I am familiar with some of those changes that have been made, but I have not seen the report,” Scharre said.

“So if you could have tables that a commander would look at 'all right, I am sending my folks out on a foot patrol and I add another 20 pounds of gear; here is how I can see a measurable way, for an average dismounted soldier, that this affects performance,'” he said. “Things like increasing mobility, increasing performance, reducing physical and cognitive fatigue, those things make a difference and those need to be part of the equation … you've got to be able to look at both sides of the equation, because right now, you don't see enough of that.”

“I would not say they signed off on it agreeing with the recommendations, that's certainly not the case,” Scharre said. “In no way is this a representation of the Army's views on the issues.”

The report is intended to examine is how much weight can soldiers effectively carry and that how protective equipment eats up “a tremendous fraction” of that fighting load, Scharre said.

“There is a cultural problem here, which is, every time you take away little bit of weight, people just pile on more stuff,” Scharre said, explaining that the fielding of a plate carrier doesn't solve the problem.

“We are dramatically overweight; we are not nine pounds overweight. The Army should set a limit: this is the amount of equipment we should issue people. And if you want to add any new pieces of gear, something's got to go.”