Armored Brigade Heads To Korea As Tensions With North Escalate

The Army announced Wednesday that a brigade of Fort Riley soldiers began a nine-month deployment to South Korea as officials... 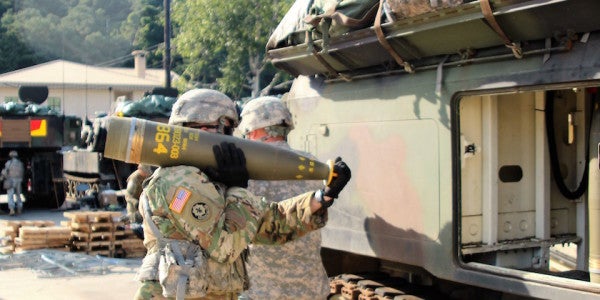 The Army announced Wednesday that a brigade of Fort Riley soldiers began a nine-month deployment to South Korea as officials from that country met with their U.S. counterparts in Washington over growing tensions with North Korea.

The 1st Armored Brigade, 1st Infantry Division at Fort Riley in Kansas is sending 3,500 soldiers to replace a brigade from the 1st Cavalry Division from Fort Hood in Texas, according the Army news release.

Many of the soldiers have already arrived at Camp Casey in South Korea, near the demilitarized zone, with the rest to arrive in the coming days and weeks, Lt. Col. Kimeisha McCullum, a 1st Infantry Division spokeswoman, said Wednesday.

A missile launch by North Korea on Saturday ended in failure as a Musudan rocket, capable of delivering a nuclear warhead, imploded after takeoff. The missile has the capability of reaching the U.S. territory of Guam.

Related: North Korea Whines About US Troops Making Faces At Its Border Guards »

“Our commitment to the defense of our allies, including the Republic of Korea and Japan, in the face of these threats, is ironclad. We remain prepared to defend ourselves and our allies from any attack or provocation,” he added.

Talks on Thursday between the United States and South Korea are expected to include plans on deploying THAAD anti-ballistic missiles to South Korea, Stars and Stripes reported Wednesday.

The rotational nine-month deployments to South Korea are designed to maintain U.S. troops there as budget cuts make it more difficult to keep units abroad. The U.S. troops will partner with South Korean military units for armed exercises and training, McCullum said.