An Army deputy chief of staff has been retired at a lower rank after a watchdog investigation found he had plagiarized work for his master's degree at the Army War College in Carlisle, Pennsylvania as a lieutenant colonel 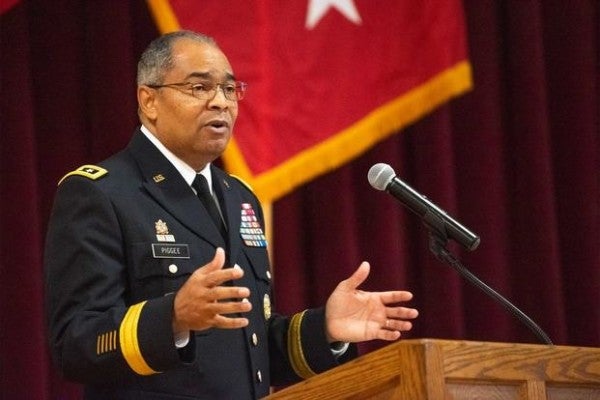 An Army deputy chief of staff has been retired at a lower rank after a watchdog investigation found he had plagiarized work for his master's degree at the Army War College in Carlisle, Pennsylvania as a lieutenant colonel, Military.com has learned.

Lt. Gen. Aundre Piggee, 60, deputy chief of staff of the Army for Logistics, G-4, has retired as a major general, an official confirmed to Military.com. The U.S. Army War College Academic Review Board determined this year that Piggee had committed plagiarism while at the school, where he received a master's in military strategy.

According to a Defense Department Inspector General document reviewed by Military.com, Piggee's master of strategic studies degree and Army War College diploma was revoked based on the findings. The U.S. Army War College Academic Review Board has amended his record “to reflect a failure to complete graduation requirements,” according to the document.

According to a published resume, Piggee was at the Army War College from July 2001 to June 2002.

“After an academic review board was conducted by the Army War College appropriate action was taken against Lt. Gen. Aundre F. Piggee,” Army spokeswoman Col. Kathleen Turner said in a statement provided to Military.com. “Lt. Gen. Piggee was retired at the rank of Major General on December 1, 2019.”

An official said Piggee, who was commissioned into the Army in 1981, had already been planning to retire.

In his position as deputy chief of staff for Logistics, Piggee has been a prominent voice calling for readiness and planning for the future. He made news in 2018 when he told an industry audience that he wanted future Army brigades to be able to fight for a month without resupply.

His service includes deployments to Iraq, Bosnia-Herzegovina and Saudi Arabia.

Piggee is not the first high-profile official to have a degree revoked by the Army War College over plagiarism. In 2014, U.S. Sen. John Walsh, a Democrat from Montana, had his master's degree revoked after the school determined he had plagiarized a research paper. The school investigated after the New York Times reported that Walsh, a former adjutant general for the Montana National Guard, had lifted “at least a quarter of his thesis” from the works of other, uncredited authors.