The Army can now 3D-print body armor on the fly

3D printers are meant to print out knickknacks, not flak jackets — which meant that engineers had to hack into the printer to get the job done 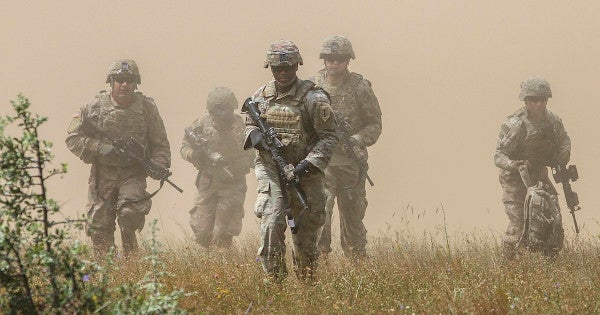 Army researchers have devised a method to produce ceramic body armor, lightweight but strong, from a 3D printer. Except that 3D printers are meant to print out knickknacks, not flak jackets — which meant that engineers had to hack into the printer to get the job done.

Ceramic armor, light but hard, provides great protection but can also be difficult to manufacture, notably in combining materials to create a strong com composite. “For ceramics, that's a bit of a challenge because with you can't really do a one-step additive manufacturing process like you could if a metal or a polymer,” said Lionel Vargas-Gonzalez, a researcher at the Army Research Laboratory.

Ceramic armor stops bullets by shattering them or reducing their penetrative ability, but this depends on how porous the ceramic is. Ceramic armor can achieve “something that's about 99 to 100 percent fully dense,” Vargas-Gonzalez said, and that density is important because “porosity is one of the main deficiencies of ceramic armor when it comes to being able to withstand threats.”

Vargas-Gonzales sees 3D printer ceramics as the “next avenue for armor because we're going to be able to, in theory, design armor in a way that we can attach multiple materials together into a single armor plate, and be able to provide ways for the armor to perform better than it can be just based on one material alone.”

Even though it wasn't in the printer manufacturer's manual, Joshua Pelz, a materials science and engineering doctoral candidate at the University of California San Diego, figured out how to hack the printer.

“Two syringes containing distinct, viscous ceramic slurries are connected to a custom-made auger and print head,” ARL said. “Pelz took advantage of his computer programming skills to hack into the 3D printer, tricking it into using its own fan controls to manipulate the ratio of materials being printed. He designed a custom auger and print head and even used the same 3D printer to create those parts.”

Pelz says the 3D printing offers immense possibilities. “3D printing and additive manufacturing generally gives someone the ability to really design and create anything they want. It's a very quick process from thinking up a design, modeling that design and actually producing that design.”

Yet the really interesting question isn't just what a 3D printer can produce, but who can produce it. If it's technically possible—and now legal in the United States—to print 3D guns, and it's also feasible to print ceramic armor, then the possibilities are immense.

But not necessarily for the better. Obviously, a military organization like the Army has access to specialized materials and expertise. Still, military technology tends to diffuse into civilian use. If someone can hack a 3D printer into churning out firearms and body armor, then they can effectively outfit a light infantry force (and let's not get into exotic items like drones or explosives).

3D printing is a democratization of technology that allows people to produce things that were once built in factories, and now produced in the garage. Guns and body armor included.