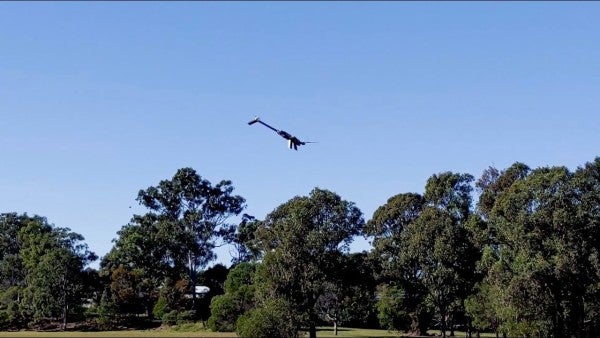 The man-packable Cerberus GL unmanned aerial system — made by Skyborne Technologies Pty. Ltd. — is being evaluated in the Army Expeditionary Warfare Experiments 2020 at Fort Benning, Georgia.

The drone weighs 14 pounds, has a range of two miles and can fire three 40mm high-explosive grenades at defiladed targets well beyond the 400-meter maximum effective range of the M320 grenade launcher.

It's been two years since the Army canceled the XM25, a sophisticated, shoulder-fired counter-defilade weapon, but Army weapons officials continue to search for solutions capable of killing enemy troops protected behind cover.

“One of the priorities, especially for the Infantry Center, is counter-defilade,” Ed Davis, director of the Army Futures Command Maneuver Battle Lab at Benning, told Military.com.

The XM25, nicknamed the Punisher by the infantry community, was equipped with an advanced fire-control system and programmable 25mm airburst ammunition. It was also a complex weapon that suffered from program delays and expensive ammo that ultimately led to its demise.

Currently, infantry officials are looking for simpler counter-defilade solutions designed to use munitions in the Army inventory, Davis said.

“To come up with a new system like the XM25, that's a hard one to sell sometimes,” he said. “Industry knows that we want counter-defilade, but they also know that in most cases it's to adapt a current capability.”

The system featured a six-bladed commercial drone that could hover over a target and fire the LAW straight down on the enemy, Davis said.

“We've got like 100,000 LAWs in the inventory,” he said. “All you are trying to do is get that weapon further forward so you can shoot behind an obstacle. It worked pretty good.”

Last year's AEWE also evaluated an M72 LAW equipped with a programmable 66mm warhead, which peppered targets with about 4,000 fragments of shrapnel.

As with systems tested in past AEWEs, the data collected from the evaluation of the 40mm-firing Cerberus GL drone will be put into report after the experiment is complete in March, Davis said, describing how these counter-defilade systems could turn into low-cost programs of record in the future.

“The big thing is, if we go to conflict now and we had to have one now, we've got some alternatives,” Davis said.