How The Army Accidentally Shipped Live Anthrax To Military Bases

Potentially deadly live anthrax spores were mistakenly sent to a laboratory in Hampton Roads from an Army facility in Utah,... 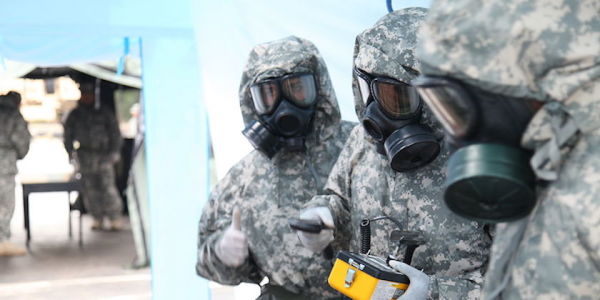 Potentially deadly live anthrax spores were mistakenly sent to a laboratory in Hampton Roads from an Army facility in Utah, according to a map in a government watchdog report.

The Army has said samples of anthrax that were supposed to have been inactivated were sent to 194 federal, academic and commercial laboratories in every state, nine countries and three U.S. territories. There were a total of 575 shipments of live anthrax delivered to labs from 2004 through 2015, although the Army says no illnesses were reported.

The mistaken shipments were first discovered in May 2015, when a private company in Maryland notified the Centers for Disease Control and Prevention that it found live spores in a shipment from the Army that should have contained only dead spores. The company was developing a diagnostic test to identify biological threats.

A subsequent investigation found that live spores were mistakenly sent from Utah to 88 primary recipients, who then sent samples to 106 secondary recipients.

The Army has not specified which laboratories received the live samples. But a Government Accountability Office report released last week included a map that shows a laboratory in Hampton Roads was one of the primary recipients. The GAO said it could not elaborate on specific sites beyond the map.

The CDC is prohibited by law from disclosing the names or locations of laboratories that handle anthrax and other deadly toxins. But 122 labs are registered and authorized to work with anthrax in the United States, according to CDC spokesman Jason McDonald.

The strain that was shipped from the Army’s Dugway Proving Ground in Utah’s western desert was an “extremely harmful” variety that was the same as those sent in letters to two U.S. senators and multiple media outlets in a 2001 attack, according to the Army. At that time, 22 people contracted anthrax and five of them died. The military works with biological agents to develop countermeasures for U.S. troops.

Yet Army officials said in a news conference in January that safeguards were in place so that nobody was threatened due to the errant shipments.

“At no time were lab technicians, nor the American public, at risk based on these inadvertent shipments,” said Maj. Gen. Paul Ostrowski, who investigated the mistaken deliveries.

Ostrowski noted that technicians who work with anthrax always wear protective equipment, and it was shipped in a secure manner in a liquid vial. Anthrax is spread by skin contact with infected animal tissue, bites from insects that feed on infected animals, inhalation and ingestion of contaminated undercooked meat.

“So again, not aerosol. Anthrax or bacillus anthracis, is mostly placed in an aerosol venue,” Ostrowski said.

The GAO report that contains the map showing the anthrax deliveries focused on other incidents where various pathogens weren’t inactivated before shipment. The report found 21 instances – 11 more than labs previously reported – between 2003 and 2015. The report also said the actual number could be higher because there’s no standardized way for labs to report a problem or a way to easily access databases.