‘That smile, it was contagious’ — Friends and family remember soldier killed in Syria rollover 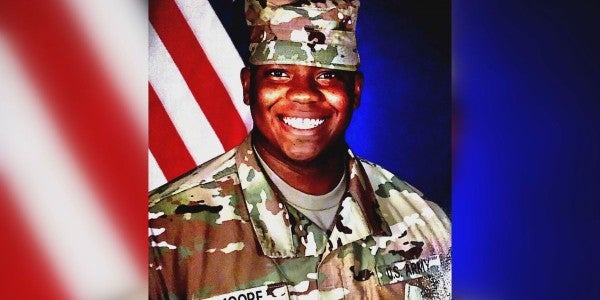 Those closest to Army Spc. Antonio Moore knew him as Tony. Former coworkers at Jerry Allen's Sports Bar and Grill at Katy's Midtown nicknamed him “Smiley.”

And in the days since his death, that's how he's been remembered most: The young man with the genuine, soulful smile.

Moore, 22, died Jan. 24 in Deir ez Zor Province, Syria, during a rollover accident while conducting route clearance operations as part of Operation Inherent Resolve. It was his first deployment.

Drive past Jerry Allen's off College Road, and you'll see a tribute to the establishment's former line cook flashing in bright blue letters: “Always in our hearts. Antonio Moore.”

“We have all cried for days. I could cry right now,” Kelly Baucom, an owner at Jerry Allen's, said this week.

Moore's mother was among those who noticed the sign. She, along with other family members, stopped in to thank the restaurant for their support and share memories of her son. Baucom said his mother fondly remembers picking him up from work and how he would always bring her a lemonade.

“He has always been a part of our family,” Baucom said. “He was the guy that would come to work and make the day better.”

Moore enlisted in the Army in May 2017 as a combat engineer while he was still working at Jerry Allen's. He was assigned to the 363rd Engineer Battalion, 411th Engineer Brigade, in Knightdale. His awards and decorations include the National Defense Service Medal and the Army Service Ribbon.

One look at Moore's smile was all it took to turn an otherwise crummy day into a cheerful one. It was the first thing former Hoggard High School football teammate Hunter Louthan thought of when he heard the news of Moore's untimely death.

“He could really brighten a room. He didn't have to say anything. He would just come in and smile,” Louthan said. “He was one of those guys that had a positive impact on everyone. When you would see him flash a smile, that smile, it was contagious.”

Louthan remembers Moore as one of the hardest workers in the weight room, always out running and pushing his teammates. He always received “Iron Man” status, which was designated for players who attended a certain amount of summer conditioning.

“He was a competitor, and the positive impact he had on people, he might not even know he had that impact,” Louthan said. “All of the people reacting to the news on social media, to see the impact he had on a lot of people's lives that he may not have known, it's all positive.”

Moore's work ethic continued as a line cook. Baucom said he was a morale builder and always kept spirits up. When there would be 30 tickets on the board, he happily cooked up orders.

“He would be back there fryin' and smilin',” Baucom said.

Former Hoggard defensive coordinator Jeff Turner considered Moore one of his own children. Many of his favorite coaching memories involve Moore and his older brother, Malik.

Like Louthan, when Turner thinks of Moore, he said he sees a kid with a great smile on his face. He thinks of a person with great character who carried himself in a respectful manner and was always humble.

“I loved Tony and I love his whole family. They are great people and my condolences go out to them,” Turner said. “He is everything you want in a son.”

Moore's No. 90 football jersey now hangs in the Hoggard Field House as an example of servant leadership and a reminder of the positive presence he left on campus. Vikings head coach Craig Underwood said many of Moore's former teammates have reached out to him, and that he will be honored before the first home game in the fall.

“The biggest thing I keep coming back to is his smile and his personality in the locker room,” Underwood said. “He was a really disruptive football player and did great things on the field, but it was his personality that others gravitated toward and followed.”

Baucom said that more than anything else, Moore's mother is ready for her son to return to Wilmington. His remains, resting inside a flag-draped coffin, received a dignified transfer at Dover Air Force Base in Delaware on Tuesday, one of the last steps along the journey to his final resting place.

“She said at one point it is just time for him to come home. That just got me,” Baucom said while choking back the tears. “It has been long enough. It's time. That really tore all of us up.”

Moore's military headshot and a traditional, triangle memorial flag case will eventually be displayed on a wall at Katy's. In the photo, Moore is smiling.