"This was in no way intended to glorify the German forces," a spokesman said. 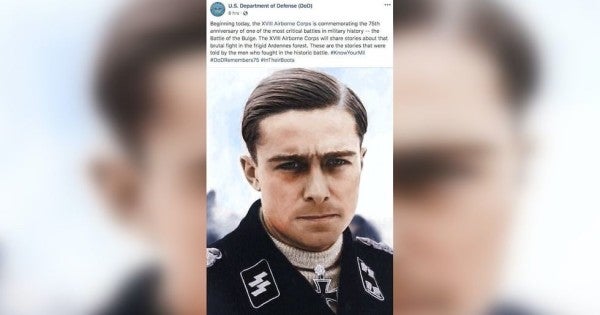 A photo of a Nazi commander shown on the 18th Airborne Corps' social media page has been removed and an apology has been issued.

On Monday, the 18th Airborne Corps' Facebook page made the first post of its series to commemorate the World War II operation between German forces and Western Allies known as “The Battle of the Bulge.”

The Corps' since-deleted post to kick off the commemoration had a photo of German Schutzstaffel Col. Joachim Peiper.

The Library of Congress identifies Peiper as commander of a German unit that shot at 113 unarmed American soldiers who had surrendered as prisoners of wars on Dec. 17, 1944, in a field near Malmedy, Belgium.

Peiper and other German soldiers were later convicted of war crimes.

A spokesman for the 18th Airborne Corps issued a statement Tuesday saying officials regret using the photo of Peiper.

The post with Peiper's image was the first in the series to tell “the full story” of the Battle of the Bulge, said Lt. Col. T.J. Rainsford, a spokesman for the Corps.

“In an attempt to tell the full story of the fight, we also presented the perspective of the German commanders involved in the counterattack,” Rainsford said. “This was in no way intended to glorify the German forces, but to fully portray the odds stacked up against the Americans by Dec. 19.”

The Facebook post was shared by the Department of Defense and the Corps' subordinate unit, the 10th Mountain Division, before the photo was deleted.

Among those who criticized the use of the photo is Lt. Col. Brian Fickel, who made a screenshot of the social media posts.

Newsweek identified Fickel, who uses the Twitter name USArmyPAO, as a public affairs officer and student at the Army War College in Carlisle, Pennsylvania.

“I am dumbfounded by the decision to prominently display a Nazi on military social media on the 75th anniversary of the Battle of the Bulge,” Fickel wrote on his Twitter account.

He told Newsweek he thought use of the photo was “an error in judgment” and “I was really just frustrated that we made a mistake like that.”

An updated, edited version of the post states that as Peiper “began his push, our heroes, the soldiers of the (18th) Airborne Corps, were hundreds of miles away…”

Rainsford said the story of the Battle of the Bulge will run multiple times each day during the next six weeks.

Representatives of the Corps previously told The Fayetteville Observer that the accounts would be posted until Jan. 22.

Lt. Col. Joe Buccino, a special assistant to the Corps' Public Affairs Office, previously said the stories from the Battle of the Bulge will be told from the perspectives of the Corps soldiers and the Germans.

“What we want is for the reader to feel the fear and observe the round's impact, to feel the cold, to get the human element of this fight,” Buccino had said.

Buccino said the stories are based on thousands of pages of military records provided by the U.S. Army Heritage Center.

A Twitter account belonging to Erik Villard, who states he is the digital military historian for the Center of Military History, questioned whether an “overworked” public affairs officer searched for Battle of the Bulge on Google and picked the image.

“We Have an Army Center Of Military History!! We can help!,” Villard wrote in response to Fickel's Tweet.

This will be interesting. Just a case of an overworked PAO searching “Battle of the Bulge” on Google and seeing a nice color image? I hope that's all it proves to be. But please- all of you Army PAO's out there. WE HAVE AN ARMY CENTER OF MILITARY HISTORY!! We can help! :]” Villard tweeted.