Editor’s Note: This article by Matthew Cox originally appeared onMilitary.com, the premier source of information for the military and veteran community. A... 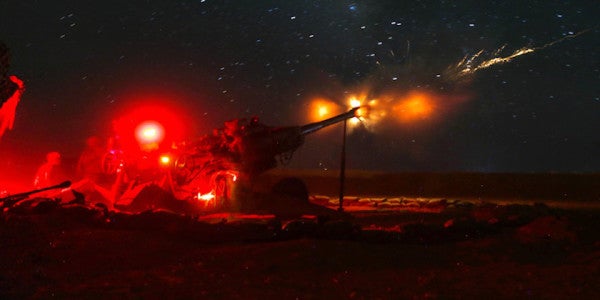 A U.S. Army artillery unit is pounding Islamic State fighters inside Syria from a remote desert camp just inside Iraq.

Soldiers from the 3rd Armored Cavalry Regiment artillery unit have been operating alongside Iraqi artillery units at a temporary fire support base in northwest Iraq near the Syrian border for the past several weeks, according to a recent Defense Department news release.

The U.S. military previously made use of rapidly built fire bases to insert artillery power earlier in the campaign against ISIS. In 2016, a detachment of Marines departed the Kearsarge Amphibious Ready Group to establish such a location, Fire Base Bell, in northern Iraq. The position, which was later renamed and manned by Army forces, helped U.S. troops intensify the assault on the ISIS stronghold of Mosul.

It would come under enemy attack soon after its establishment, resulting in the death of Marine Staff Sgt. Louis Cardin, the first Marine to die in combat against ISIS.

Little has been made public in recent months about the U.S. military's use of temporary fire bases to continue the ISIS fight. But NPR published a brief report Monday about a “remote outpost” on the border of Iraq and Syria that seems to be the one described in the recent Defense Department release.

Some 150 Marines and soldiers are stationed there, NPR reported, in addition to Iraqi forces.

In the release, troops stationed at the fire base described the satisfaction of working side-by-side with Iraqi units.

“The most satisfying moment in the mission, so far, was when all three artillery units, two Iraqi and one U.S., executed simultaneous fires on a single target location,” said Maj. Kurt Cheeseman, Task Force Steel operations officer and ground force commander at the fire support base, in the release.

“This mission required the use of multiple communications systems and the translation of fire commands, at the firing point, directing the Iraqi Army guns to prepare for the mission, load and report, and ultimately fire,” 1st Lt. Andrea Ortiz Chevres, Task Force Steel fire direction officer, said in the release.

“In order to execute coalition fire missions, we had to develop a calculation process to translate their firing data into our mission data to validate fires prior to execution,” Cheeseman said in the release.

It’s not clear from the release when the base was created or how long it has been active. With little infrastructure and no permanent buildings, troops face temperatures above 100 degrees Fahrenheit in the desert.

“They are enduring harsh weather conditions and a lack of luxuries but, unlike previous deployments for many, each element is performing their core function in a combat environment,” Cheeseman said in the release. “The fire support base is a perfect example of joint and coalition execution that capitalizes on the strengths of each organization to deliver lethal fires, protect our force and sustain operations across an extended operational reach.”

Navy, Marine Corps and Air Force units provided planners, personnel and equipment to create the austere base, built on a bare patch of desert and raised by hand. Coalition partners from several different nations participated in the planning and coordination of the complex movement of supplies.

“Supplies were delivered from both air and ground by the Army, Air Force and Marines, and include delivery platforms such as medium tactical vehicles, UH-60 Black Hawks, CH-47 Chinooks, CV-22 Ospreys, C-130 Hercules and a C-17 Globemaster,” 1st Lt. Ashton Woodard, a troop executive officer in Task Force Longknife, said in the release. “We receive resupply air drops that include food, water, fuel, and general supplies.”

One of the most vital missions involved setting up a security perimeter to provide stand-off and protection for the U.S. and Iraqi artillery units.

“Following 10 days of around-the-clock labor in intense environmental conditions, the most satisfying moment was seeing the completion of the physical security perimeter,” said one Marine working security at the fire base, according to the release.