The Army will soon overhaul its Basic Combat Training course in an effort to produce fitter, more disciplined and better... 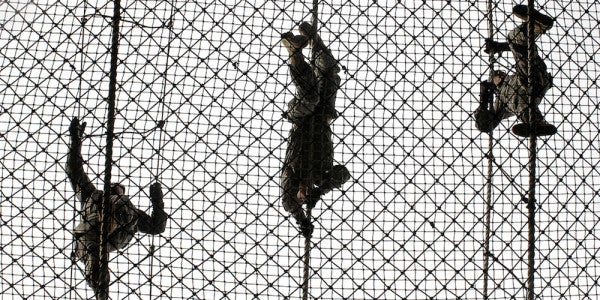 The Army will soon overhaul its Basic Combat Training course in an effort to produce fitter, more disciplined and better motivated new soldiers, the general in charge of entrance training said Friday.

“First unit assignment leaders want initial entry training to deliver disciplined, physically fit new soldiers who are willing to learn, who are mentally tough, professional and who are proud to serve in the United States Army,” Frost said. “The bottom line is that when you graduate Basic Combat Training, you are supposed to be ready for your first unit assignment to be ready to step on a plane and go to combat.”

The changes are expected to go into effect before the fiscal year ends in October. They come as the Army looks to recruit some 15,000 new soldiers to increase its force during the coming year.

Through the past three years, the Army polled more than 27,000 of its noncommissioned officers, warrant officers and officers in the ranks of second lieutenant to colonel, asking them to identify deficiencies they have observed among the service’s newest soldiers.

What Frost found was leaders primarily concerned with a lack of discipline among those soldiers reporting to their first units. The general said the surveys indicated a trend in new soldiers reporting with less-than-stellar work ethics and bad habits such as arriving late for duty or wearing their uniforms sloppily. Other concerns included soldiers who have issues following orders and obeying and showing respect for their superiors, he said.

“There is too much a sense of entitlement,” Frost said. “This is about taking ownership and taking pride in the work.”

To incorporate better discipline, the Army will increase its focus in basic training on indoctrinating soldiers on Army values and evaluate them on their discipline.

Recruits will undergo bunk inspections, participate in drill and ceremony competitions and face tests on their knowledge of the Army’s history.

Frost said the focus on the Army’s long history is meant to build espirit de corps, teaching the service’s values through lessons on pivotal battles from the Revolutionary War to the capture of Baghdad from Saddam Hussein’s forces in the Army’s 2003 Thunder Runs across Iraq.

They will largely focus on individual acts of valor in past battles to instill in recruits “what it means to be a United States Army soldier” and connect them with the service’s heritage, he said.

The increased physical fitness standards will align with ones required of soldiers in the force. That means recruits must score 60 points — determined by a soldier’s age and gender — on each of the three aspects of the Army Physical Fitness Test, push-ups, sit-ups and two-mile runs. Previously recruits only needed to score 50 points on each test in basic training, Frost said.

To aid recruits in achieving the more stringent fitness requirements and to better prepare them for combat, the Army will increase the amount of time recruits spend in the field and boost combatants training from 22 hours to 33 hours during the 10-week course.

The final training exercise — called the Forge — will be among the changes that include combat-specific tasks. The 81-hour exercise will consist of a 40-mile road march with tasks along the way, including a medical evacuation exercise, a night infiltration, a mission to resupply troops, an obstacle course and patrols “very much like what they could see in combat,” Frost said.

The overhauled Basic Combat Training course has been tested for several months at Fort Jackson in South Carolina with “a lot of success,” the general said Friday.

“We are simply trying to instill some pride, a little bit of grit and resilience in basic combat training there,” Frost said. “It’s not that we’re going back to shining boots, and having drill and ceremony as a predominant aspect of basic training. We’re not. But what we are doing is we are creeping some of that back in — we’re trying to do things the right way.”