The Army Is Eying A New, More Lethal Caliber For Its Future Battle Rifle

Editor’s Note: This article by Matthew Cox originally appeared on Military.com, the premier source of information for the military and veteran community. The... 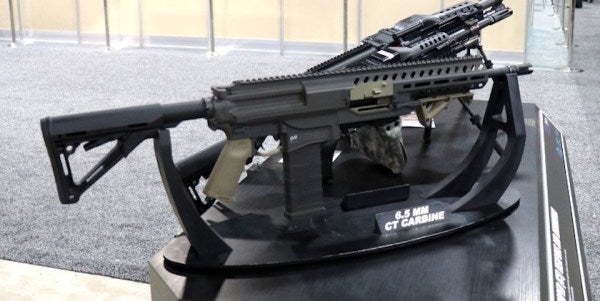 The Army’s chief of staff recently made a bold promise that future soldiers will be armed with weapons capable of delivering far greater lethality than any existing small arms.

“Our next individual and squad combat weapon will come in with a 10X improvement over any existing current system in the world, and that will be critical,” Gen. Mark Milley told an audience at AUSA 2017 on Oct. 10.

Milley’s pledge to “significantly increase investments” in a leap-ahead small arms technology appeared low in the story I wrote for Military.com since soldier lethality was the lowest of the Army’s top six modernization priorities.

As Milley was speaking, Textron Systems officials were showing off their new Intermediate Case-Telescoped Carbine, chambered for 6.5mm on the AUSA exhibition floor.

Over the last decade, the Army has invested millions in the development of the program, which has now been rebranded to Textron’s Case-Telescoped Weapons and Ammunition.

Textron’s cased-telescoped ammunition relies on a plastic case rather than a brass one to hold the propellant and the projectile, like a conventional shotgun shell.

“I think the most important thing is what we have been able to do with the intermediate caliber, the 6.5mm in this case,” Wayne Prender, vice president of Textron’s Control & Surface Systems Unmanned Systems told Military.com. “We are able to not only provide a weight reduction … and all the things that come with it – we are also able to provide increased lethality because of the ability to use a more appropriate round.”

“We actually used three different bullet shapes and we scaled it,” said Paul Shipley, program manager for of Unmanned Systems. “We scaled 5.56mm up, we scaled 7.62mm down and took a low-drag shape and ran that between the two” to create the 125 grain 6.5mm bullet that’s slightly longer than the Army’s new 130 grain M80A1 Enhanced Performance Round.

Lethality has always been a vague concept. Is it the amount of foot pounds of energy at the target? Or is it the terminal performance, or the size of the wound channel, it creates after it penetrates an enemy soldier?

It’s hard to predict how much performance will change if and when ARDEC creates a 6.5mm projectile that meets the Army’s needs.

A lot can be done to predict performance with computer modeling, but ultimately there is no way of knowing how a conceptual bullet will perform until it is live-fire tested thousands of times under multiple conditions, according to a source with intimate knowledge of military ballistics testing.

The Army has also spent years developing its current M855A1 5.56mm and M80A1 7.62mm Enhanced Performance Rounds. After many failures, the service came up with a copper-jacketed round composed of a solid copper slug that sits behind a steel penetrator tip designed to defeat battlefield barriers and remain effective enough to kill or incapacitate.

Is the Army going to throw all of that away, invest millions of dollars to redesign its ammunition-making infrastructure to switch to case-telescoped ammunition?

“What they’ve got in stockpile does what it does, and they know that is not good enough anymore, so they are faced with that choice,” Shipley said.

The Army has not come to a definitive conclusion on a future caliber, but it has been very open about its waning trust in the 5.56mm round.

In late May, Milley revealed to Congress that the M4 Carbine’s M855A1 Enhanced Performance Round cannot penetrate modern enemy body armor plates similar to the U.S. military-issue rifle plates such as the Enhanced Small Arms Protective Insert, or ESAPI.

In August, the service launched a competition to find an Intermediate Service Combat Rifle chambered 7.62mm NATO. The Army intended to purchase up to 50,000 new 7.62mm rifles to meet the requirement, according to the solicitation, but sources say that the service has already backed away from that endeavor.

Textron’s 6.5mm case-telescoped carbine certainly looks like the leap-ahead, small-arms tech that the Army is searching for to arm its future soldiers.

Then again, the Army’s imagination was also captured in the late 1990s by the Objective Individual Combat Weapon, or XM29.

Remember that? It featured a 20mm airburst weapon mounted on top of a 5.56mm carbine. XM29 had an advanced fire-control system that could program 20mm shells to burst at specific distances. At 18 pounds, it proved to be too heavy and bulky for the battlefield.

Textron officials maintain that case-telescoped carbine can be customized to whatever the Army wants.

“It’s configurable,” Shipley said. “The technology that is inside is what counts.”