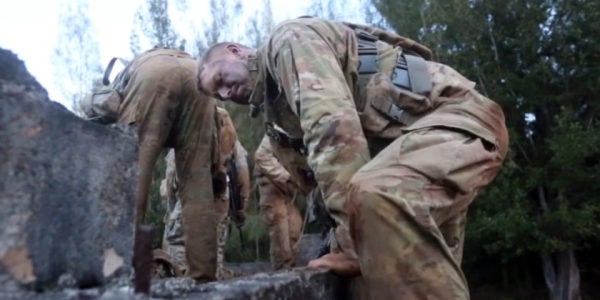 The Improved Hot Weather Combat Uniform, which features a lighter, more-breathable fabric than the current 50-50 Nylon-cotton blend, will be fielded to soldiers in the 25th Infantry Division in Hawaii for testing in January, Capt. Daniel Ferenczy, assistant product manager for Environmental Clothing and Footwear at Soldier Clothing and Individual Equipment, told reporters Thursday.

The fabric is also more breathable.

“Today's soldiers must be ready to execute their mission in any operational environment,” Col. Stephen Thomas, who runs Project Manager for Soldier Protection and Individual Equipment, said.

“The improved Hot Weather Combat Uniform and the Jungle Combat Boot are aligned with Army modernization in terms of providing the capability to the warfighter to allow them to operate in a hot, wet environments.”

There is no mandarin collar and no breast pockets on the blouse. There are button closures on the shoulder pockets.

The trousers have no back pockets and feature a gusseted crotch to prevent blowouts and improve comfort. Articulated knees “give a little bit more room for your knee to maneuver in that space,” Ferenczy said.

The trousers also feature a mesh ankle wrap, since soldiers in the jungle are often wearing trousers that are not bloused, Ferenczy said.

“Soldiers in the jungle tend to have problems with bugs, leeches, mosquitos, so there is this mesh on the ankle. You tuck it in your boot,” Ferenczy said, explaining that the design helps water drain out and prevent bugs from crawling up the trouser leg. “Soldiers have said 'it is really awesome.'”

The plan is to issue 65,000 pairs of the new uniforms — four sets to each soldier — in January

“They will wear them throughout the Pacific in various environments,” Ferenczy said, adding that uniform officials will return in March to collect feedback.

The Army also plans to evaluate up to five additional fabric types in 2018 in Pacific Pathways wear test next summer, Uniform officials maintain.

The Army will also test five versions of the Jungle Combat Boot Version 2 in January.

The Army fielded 9,000 pairs of its newly-designed Jungle Combat Boots between March and August to the 25th Infantry Division's 2nd and 3rd Brigade Combat teams.

In April, the Army issued a request for information to boot manufacturers, for new jungle boot designs. The Army then issued contracts to Altama, Bates, Bellville, Mcrae, and Rocky boot makers to submit their prototype boots for testing.

The improved designs are not radically different from the first version of the Jungle Combat Boot, Ferenczi said.

The plan is to issue 150 pairs of each design one battalion from the 25th ID and return in March to collect feedback, Ferenczi said.

The Army and the Marine Corps retired the popular, Vietnam War-era jungle boots in the mid-2000s when both services transitioned to a desert-style combat boot for combat operations in Iraq and Afghanistan.