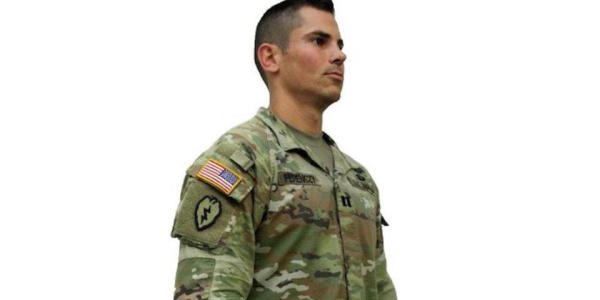 In January, U.S. Army uniform officials will begin an evaluation of the service's new Improved Hot Weather Combat Uniform by issuing the lighter, more breathable uniform to thousands of soldiers in Hawaii.

The new IHWC is the result of a directed requirement to outfit soldier with a jungle uniform suitable for operations in the Pacific theater. This follows a similar effort that recently resulted in the Army fielding 9,000 pairs of new Jungle Combat Boots to the 25th Infantry Division's 2nd and 3rd Brigade Combat teams in Hawaii between March and August.

“January 2018 is going to be huge,” said Capt. Daniel Ferenczy, assistant product manager for Extreme Weather Clothing and Footwear. “They are going to be pure-fleeted in the [Operation Camouflage Pattern] with jungle boots in a hot weather combat uniform.”

The new uniform, made by Source America, is a 57 percent Nylon/ 43 percent cotton blend to make it “faster-drying” and have “greater airflow” than the 50-50 Nylon cotton blend on the ACU, Ferenzcy said.

“It adds a little bit more strength which allows us to make it a lighter blend or a thinner weave … so it should dry a little quicker,” Ferenzcy said. “There are also architectural differences between the ACU uniform and this one.”

There are no breast pockets since soldiers in the field are typically wearing gear that covers them, and “all they end up doing is retaining moisture and heat, so we removed that extra layer there,” Ferenzcy said.

“The back pockets in the trousers are gone as well for the same reason,” he said. Uniform officials have added an ID card pocket inside the waistband.

The new uniform features reinforced elbows and reinforced and articulated knees and a gusseted crotch, said Ferenzcy, whose office worked with the Natick Soldier Systems Center to develop the IHWCU.

“Every design feature on this uniform came straight out of the horse's mouth,” Ferenzcy said. “The folks that designed it worked hand-in-hand with the Jungle Operations Training Center in Hawaii.”

“This is under a directed requirement, so right now they are just a one-time buy,” Ferenzcy said. “It was 'hey, we need to get these guys ready for Pacific operations.' We don't know exactly yet how we are going to sustain it.”

After 25th ID soldiers have a chance to train in the new uniforms, Ferenzcy's team plans to return in “April or May and get feedback on the uniform and then we will make adjustments as needed, Ferenzcy said.

“It they don't like this material, the 57/43 NYCO blend, we may go with something else,” he said.

Phase two of the effort involves buying another 11 brigades worth of the IHWCU in its final form for contingency stocks “in case another brigade got turned on to deploy or do a training mission in a tropical environment, we would have uniforms ready for them,” Ferenzcy said.

“This uniform is about a pound lighter than the Army Combat Uniform; it's very comfortable and not only does it make fighting and operating in a tropical hot wet environment easier, it's also going to potentially mitigate heat injuries because it holds less heat and less moisture,” Ferenczy said.

“There no scientific studies to back this up, but heat casualties across the force are one of the biggest things that take soldiers out of the fight.”