For the past two years, the North Carolina National Guard has been able to claim the nation's top tank crew.... 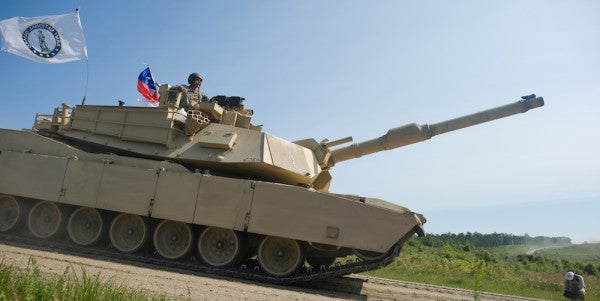 For the past two years, the North Carolina National Guard has been able to claim the nation's top tank crew.

Now, the state hopes to be the first unit to defend that title when it sends soldiers to compete against active-duty forces next month.

The 30th Armored Brigade Combat Team — the defending Sullivan Cup champions — will send a crew of four soldiers to Fort Benning, Georgia, for the biennial competition.

In 2016, the “Old Hickory” team beat out 15 other crews, including teams from traditional armor powerhouses like those found at Fort Hood, Texas; Fort Bliss, Texas; and Fort Stewart, Georgia.

The victory caught many by surprise. A National Guard tank crew had not won the competition before.

But, officials said, the 30th ABCT's victory proved that National Guard soldiers were just as good — if not better — than their active-duty counterparts

Members of this year's team know they won't be overlooked.

“We're planning on winning,” said 1st Lt. Noah Jawitz, the tank commander. “But we're not catching them by surprise.”

The top 5 tank crews participate in the final shoot off on the last day of the 2016 Sullivan Cup Competition May 6, 2016, at Fort Benning, Ga..U.S. Army/Patrick A. Albright

Jawitz leads a four-man team that is based at a North Carolina National Guard armory in Sanford.

They've been training together since January, he said. That training includes physical fitness and time in a tank simulator in Sanford, and weekly trips to Fort Bragg. There, the crew is able to practice using tanks at the North Carolina National Guard's Maneuver Area Training Equipment Site.

At the large motor pool last week, Jawitz's team focused their efforts on one of the tasks they anticipate will be part of the Sullivan Cup.

During a chilly morning, the team effectively changed a tire. But instead of working on the family sedan, it was a 63-ton war machine — an M1A1 Abrams tank.

Using hammers, wrenches and other tools, the four soldiers disconnected part of the tank's track before making repairs.

Jawitz said the team chooses a new tank to work on each week. The goal is to make mistakes and come across problems before the competition.

“We break track once a week,” he said. “These tanks are extra rusty. So, it gives a little extra challenge.”

The unit is unique in that it is based in North Carolina but reports to a squadron based in West Virginia. That squadron, in turn, is part of the North Carolina National Guard's Clinton-based 30th ABCT.

• Jawitz, a New York native now living in Wilmington. He is a guidance counselor at Hoggard High School in his civilian job.

• Sgt. Daniel Lunsford of Rural Hall. He drives a truck for FedEx outside of uniform and is a gunner on the tank.

• Spc. Peter DiGregorio of Charlotte. He is a forklift operator for Frito-Lay in his civilian job and a driver on the tank.

• And Spc. Jerrard Turner of Pittsboro, who is a loader on the tank.

The team is the only National Guard unit competing this year, Jawitz said. In some ways, that puts the team at a disadvantage.

While active-duty teams use newer generation tanks, the North Carolina team will compete using an older model — just like the tanks they train on throughout the year.

But Jawitz said that can also be an advantage. The older tanks break more often, giving soldiers more practice ahead of the competition.

“We say 'Fight your tank. Maintain your tank,'” Jawitz said. “We're representing all of North Carolina. And no matter what comes, we're ready.”

“We're going with every expectation to win the title,” he added. “Active duty does not like that. We don't care.”

The tank crew is preparing for more than just a competition.

Later this year, the 30th ABCT will move to Fort Bliss, Texas, for a huge training exercise meant to prepare it for the National Training Center in California next year.

While readying for that exercise, several of the soldiers on the Sullivan Cup team are wearing multiple hats — serving in other jobs with other units within the 30th ABCT. Some have drilled with both of their units in recent weeks.

Jawitz said the soldiers are up for the added challenge.

Jawitz said the defending champions have been mentoring his team, sharing advice and helping the soldiers prepare for the competition.

The Sullivan Cup will begin on April 30. The six-day event is physically and mentally demanding, according to Brig. Gen. David Lesperance, the 51st Chief of Armor. The competition rigorously tests a crew's maneuver, sustainment and gunnery skills.

“The Sullivan Cup provides a realistic and challenging tank crew competition that will build esprit de corps within our armor force and returns the pride of mobile protected firepower gunnery to its rightful place in the mounted force's mindset,” he said.

The competition, which began in 2012, is named for retired Gen. Gordon R. Sullivan, a former Army chief of staff.