Editor’s Note: This article by Matthew Cox originally appeared on Military.com, a leading source of news for the military and veteran community. A... 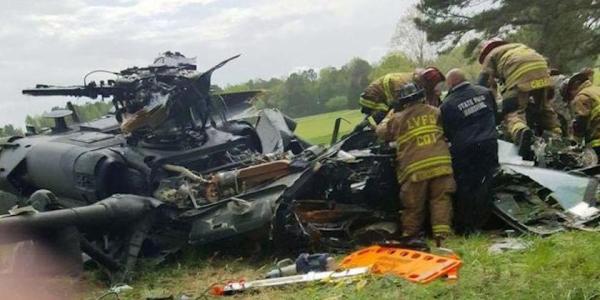 A firm representing the victims of an April 2017 Army Black Hawk UH-60L helicopter crash has filed a lawsuit against Sikorsky Aircraft Corporation, alleging that the tail rotor was improperly manufactured and caused the death of the crew chief and serious injuries to both pilots.

Marine veteran and attorney Timothy Loranger filed the lawsuit Monday in Connecticut Superior Court on behalf of the Army Capt. Terikazu Onoda and his wife Faith Onoda; Army Chief Warrant Officer 2 Christopher Nicholas; and Jessica Tomlin, the wife of Army Spec. Jeremy Tomlin, who was killed in the crash.

“The helicopter was defective, it crashed, the pilots were badly injured, one person died; Sikorsky, we are alleging, is responsible for the crash,” Loranger said.

“So we say Sikorsky is responsible for all damages that occurred. The same thing that occurs between the pilot, who is also married — Terikazu Onoda — he and his wife — their relationship is far different now because of the injuries that he suffered.”

Sikorsky spokesman Paul Jackson said Tuesday that Sikorsky is aware of the lawsuit but the company’s policy is to “not comment on pending litigation.”

Onoda was piloting the UH-60L Black Hawk, Nicholas was acting as co-pilot and Tomlin was the crew chief on April 17, 2017. The helicopter was one of three aircraft conducting a daylight air assault training formation flight.

During the flight to Davison Army Airfield, Fort Belvoir, Virginia, the helicopter experienced “unexplained and abnormal vibrations,” according to a Baum, Hedlund, Aristei & Goldman news release issued on Dec. 10. The air crew radioed they were experiencing a tail rotor malfunction and announced that they were going to make a precautionary landing at Deerfield Airport, Maryland, a private airport three nautical miles south of their position, according to the release.

Seconds later “the tail rotor gearbox, which allows the pilots to control the direction of flight, separated from the helicopter and resulted in complete loss of control. The aircrew advised that they ‘were going down,’ initiated an autorotation and made a left turn toward a long fairway at the Breton Bay Golf Course in Leonardtown, Maryland,” according to the release.

Despite the pilots’ attempts to maintain control, the aircraft began to spin to the right, completing three rotations to the right before colliding with a tree and then the ground. Onoda and Nicholas sustained serious injuries in the crash. Tomlin was pronounced dead at the scene, according to the release.

“We are saying that something went terribly wrong with the tail rotor system that caused it to malfunction so badly that it literally left the aircraft. … They had no control over the yaw of the aircraft and they crashed because of that, and we are saying ‘it’s a manufacturing or a design defect,’ ” Loranger said.

The next step for the suit is to exchange information with Sikorsky and investigate to determine whether the tail rotor section was manufactured properly and to appropriate standards, Loranger said.

“It looks like something went wrong during the manufacturing process that allowed there to be a weakness within the tail rotor section,” he said. “We are suggesting that they made it incorrectly.”

Loranger did not want to discuss the amount of compensation the court might award the victims should they win the suit.

“We are still investigating the case,” Loranger said. “The damages are someone died, two men’s lives have been completely changed and that is up to a jury to decide.”