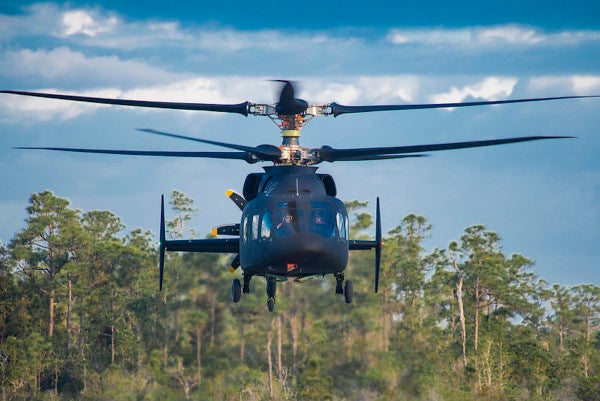 WEST PALM BEACH, Florida — Test pilots who fly the SB-1 Defiant claim that the futuristic helicopter could get its tail shot off in combat and still fly faster than an undamaged UH-60 Black Hawk.

The Sikorsky-Boeing Defiant just performed a high-profile flight demonstration for Army leaders. And a version of dual-rotor aircraft is competing to one day replace the venerable Black Hawk as the service's new Future Long Range Assault Aircraft (FLRAA) under the Future Vertical Lift (FVL) effort.

Defiant strikes an intimidating silhouette with its prominent X2 technology, which features a coaxial rotor system and a large rear propeller that replaces the tail rotor found on conventional helicopters.

Sikorsky-Boeing officials said the new aircraft design will be capable of flying at speeds of more than 200 knots, or 230 miles per hour, and maneuvering like a fine-tuned sports car.

Test pilots on Defiant said they love the rear pusher-prop, which is designed to provide revolutionary thrust, but are also comforted that it can take direct hits in combat without causing catastrophic failure to the aircraft.

“It's all self-contained back here; you can take significant combat damage back here, and if you lose the prop, you are still a 150-knot machine,” Ed Henderscheid, former U.S. Army AH-64 Apache pilot and Boeing's lead test pilot for Defiant, told defense reporters recently.

Unlike a conventional tail rotor, the rear pusher prop is completely electric, he said.

“Not having hydraulics in the tail boom as a helicopter pilot is a huge deal,” Henderscheid said. “I have had hydraulics failures where they were caused by a break in the hydraulic line … and it's scary when you have to go to keep your tail rotor where you want it. Not having to worry about a leak … or some mechanical failure — that's a really, really comforting thought.”

The Army awarded a team from Sikorsky, part of Lockheed Martin Corp., and Boeing Co. a 2014 contract to build Defiant as part of the Joint Multi-Role Technology Demonstrator (JMRT-D) program.

A Textron Inc.-Bell team also received a contract under the effort and built the V-280 Valor, a tiltrotor-design helicopter that completed its first test flight in December 2017.

The Defiant faces stiff competition from the Valor, which flew at 200 knots at a test flight in January, according to Defense News.

So far, the Defiant has flown up to 140 knots, but test pilots say the speed is based on technology that has already been proven in the Sikorsky S-97, the first helicopter of this type built with the X2 coaxial rotor and rear-thrust propeller technology.

The Raider has been flying since 2018 and has surpassed speeds of 200 knots, Sikorsky representatives said. It is currently being scaled into the Raider X, which will be 20% larger and designed to compete in the Army's Future Attack Reconnaissance Aircraft (FARA) effort, which is also part of the Future Vertical Lift program.

During Thursday's test demo, Defiant flew at about 140 knots, but only used about 20% of the pusher propeller capability and about 30% of the engine power on Defiant, Henderscheid said.

“You translate that power into the prop and you go faster,” he said. “The requirement that we needed to design around is 230 knots, and we will easily hit that.”

The pusher prop can also be reversed very quickly to provide negative thrust for quick braking power, and then turned off for a quieter sound signature, said Bill Fell, a former Army aviator and senior experimental test pilot for Raider and Defiant.

“Coming into that objective, I'm using all of the thrust from the prop. And when I am close enough where I want to lower acoustic signature because I don't want to let them know I am coming, I can disengage it and fly in at helicopter like speeds,” Fell said.

“You are now getting in faster and you are getting out faster, so you have reduced the amount of time you are in a dangerous environment,” Malia said.

The former Army National Guard officer lost both of her legs after she was shot down by enemy fire in Iraq in 2004.

“The ability to slow down within a very short distance — within a half mile — to be able to go from 200 to zero — that's amazing,” Duckworth said. “I think about the fact that when I was flying … I was slow, I was exposing my belly to everyone, to anyone who wanted to shoot at me.

In addition to speed, Defiant's X2 technology features a rigid rotor system that provides significantly more agility and maneuverability for an aircraft than what conventional aircraft have today, Malia said.

“The conventional rotor system has a lot more give, think about it like the ride of Cadillac — it's less responsive,” Malia said. “When you get to a rigid rotor system, it's more like you are talking about a Porsche or a Ferrari in the level of responsiveness.”

Fell said the rigid-rotor system feels “more like a fighter jet response than a helicopter response — it's that crisp.”

The Sikorsky-Boeing team and team from Textron-Bell have both provided Army program officials with test data throughout the JMRT-D effort, which ended last fall.

The Army is scheduled to begin a competitive demonstration and risk-reduction phase for FLRAA. That phase is set to finish in 2022, the year the service plans to down-select to one vendor to build the Black Hawk replacement.

“What these tech demonstrators are providing is great data back to the Army to understand what the future rotorcraft capability could be,” Jay Macklin, director of Future Vertical Lift Business Development for Sikorsky.

“The Army is going to take all the information that is learned through the JMRT-D program, and it is going to come up with what it feels is the best design to move forward in the FLRAA competition.”