Editor’s Note: This article by Matthew Cox originally appeared on Military.com, the premier source of information for the military and veteran community. Army equipment... 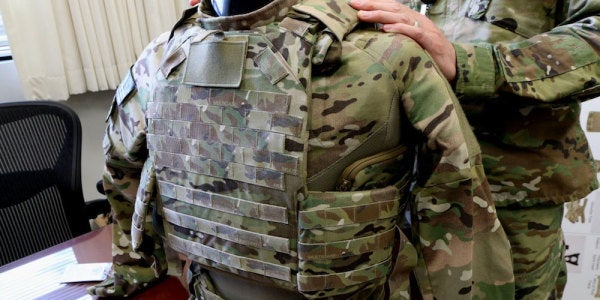 Soldiers with the 71st Ordnance Group (Explosive Ordnance Disposal) and 10th Chemical Hazardous Response Company at Fort Carson, Colorado recently participated in the final round of field-testing for the MSV, which is part of the Soldier Protection System and is the Army’s next-generation Personal Protective Equipment system.

“We have been working on this vest for the past five years and have since have gone through four versions of the vest and an additional two versions of the Soldier Plate Carrier system,” McNair said in a recent Army press release.

Soldiers with in the 71st Ordnance Group (Explosive Ordnance Disposal) and 10th Chemical Hazardous Response Company participate in the final round of field-testing for the Modular Scalable Vest (MSV) during a weeklong series of evaluated tasks at Fort Carson, Colo., Oct. 18, 2017.Photo via DoD

McNair said once the evaluation is complete, the vest will go into production and is expected to reach soldiers in the field by summer of next year.

Soldiers currently wear the Improved Outer Tactical Vest, or IOTV, which debuted in 2008.

The MSV replaces most of the pouch attachment ladder system on the IOTV with a rubber-like material with laser-cut slots. The improvement still allows soldiers to affix mission essential gear to the vest, while reducing overall weight.

McNair said the big push to design a new body armor was based on “cutting down on the weight of a soldier’s load.”

Many of the testers said the MSV was noticeably lighter than their current body armor.

Related: Soldiers Could Be Headed Downrange With New Body Armor By 2018 »

“Compared to my IOTV, this vest is lighter and cooler, has a greater range of motion, and a better fit,” said 1st Lt. Dawn Ward, a platoon leader with 663rd Ordnance Company and officer in charge during the evaluation.

“It is a huge improvement over previous body armors.”

In addition to saving weight, the MSV is scalable, which was made possible by a four-tier configuration. The tier system will allow the wearer to tailor the vest to better fit mission requirements.

The first tier enables the wearer to pull out the inside soft armor to be used as concealable body armor. The second tier is the soft armor with plates. The third tier is the vest with ballistic plates and soft armor.

The final tier is the addition of a ballistic combat shirt that has built — in neck, shoulder and pelvic protection and a belt system designed to relocate much of what Soldiers affix to their vest to their hips.

Spc. Isaac Bocanegra, an EOD technician with 764th OD CO, said he prefers the MSV’s ballistic combat shirt over the IOTV’s yoke and collar set up because it gives him more range of motion.

“I currently wear the IOTV about twice each day and it is quite a bit heavier than this body armor,” said Bocanegra. “Having this new body armor would make my job so much easier.”

McNair said the premise of the tier system is to evenly distribute the system’s weight and reduces stress on a soldier’s upper body.

“It will be up to unit leadership to determine the level of protection required for wear,” said McNair.

The MSV retained the quick-release feature first used in the IOTV to allow for easy removal in emergency situations, but with a simpler and interchangeable design. Instead of a single pull-tab, the MSV has a buckle system that can be used in one of three ways; left shoulder, right shoulder, or both depending on the wearer’s preference.

Extended sizing options allow the MSV to be tailorable and more accommodating to most soldier body types.

Spc. Hannah Carver-Frey, of the 10th Chemical Hazardous Response Company, wears an extra-small MSV “because it positions the plates where I need them to be and it has a tighter fit for me,” she said.