Jim Stauffer said he donated the body of his mother, Doris Stauffer, to the for-profit Biological Resource Center after she died in hospice care in 2013, hoping that it could conduct research into Alzheimer's, a disease she had — but he learned after a 2016 Reuters investigation that her body had been used for a U.S. Army research project looking at bomb impact 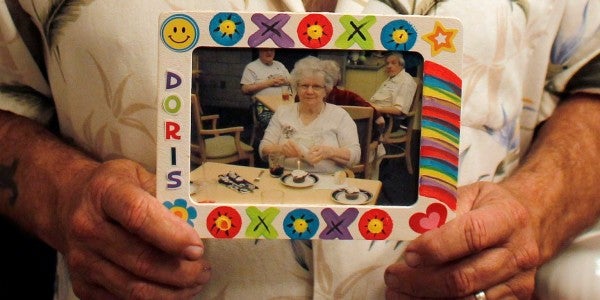 A man is suing a U.S. body-donation company for giving his mother's body to the military for blast testing when he believed it would be used for medical research.

Jim Stauffer said he donated the body of his mother, Doris Stauffer, to the for-profit Biological Resource Center after she died in hospice care in 2013, hoping that it could conduct research into Alzheimer's, a disease she had.

Stauffer said he learned after a 2016 Reuters investigation that her body had been used for a U.S. Army research project looking at bomb impact.

Stauffer has now joined 32 other plaintiffs suing the center, accusing it of deceiving them about what happened to their family members' bodies. The case is set to go to trial on October 21, CNN reported.

The lawsuit says the bodies “were literally used as crash test dummies, which meant they were used in experiments involving exposures to destructive forces, e.g. impacts, crashes, ballistic injuries and blasts.”

A 2014 FBI raid on the Biological Resource Center's facility in Phoenix uncovered buckets of human body parts as well as a human head sewn onto a different body.

The new details emerged in July through eyewitness testimony as part of the lawsuit. The center closed in 2014 after the raid.

im Stauffer with a photo of his mother, Doris Stauffer, whose body he donated, in December 2016(Reuters/Ricardo Arduengo)

The Army experiments were meant to help protect U.S. troops in places like Iraq and Afghanistan from roadside bombs, Reuters reported.

Stauffer told the Arizona-based ABC 15 in July that his mother's body was “supposedly strapped in a chair on some sort of apparatus, and a detonation took place underneath her to basically kind of get an idea of what the human body goes through when a vehicle is hit by an IED.”

Stauffer told ABC 15 that he had specifically told the center that her body could not be used for military tests, something he also told Reuters in 2016.

According to Reuters, the center's donor consent form asked whether the body could be used on “non-medical projects that could involve exposure to destructive forces e.g. impacts, crashes, ballistic injuries, and blasts.”

Stauffer said he ticked “no” on the form.

The Reuters investigation in 2016 said the center cremated one of Doris Stauffer's hands and then sent those ashes to her son. It then sold the rest of her body to a taxpayer-funded U.S. Army research project.

Army officials told Reuters in 2016 that they had not seen the consent forms and had trusted the Biological Resource Center's word, adding that Army policy was to not use bodies if the family had not consented for them to be used for military use.

Randy Coates, a civilian engineer who directed the Army's project, told Reuters that bodies in the experiments were not destroyed but that bones were broken. The Army considered using mannequins but could not test the impact of explosions under a vehicle while using them, according to Reuters.

Stauffer told ABC 15 that he donated his mother's body to the center only because her neurologist was unable to take the body.

She had Alzheimer's despite not having the gene that is most associated with the disease, and doctors thought that studying her brain could give them more information about whether the disease had mutated, ABC 15 reported.

“I feel foolish,” Stauffer said. “Because I'm not a trusting person, but in this situation you have no idea this is going on — you trust. I think that trust is what they fed on.”

Stephen Gore, the owner of the Biological Research Center, pleaded guilty in 2015 to operating an illegal enterprise. He was sentenced to one year deferred prison time and four years of probation.

Gore told Reuters in 2016 that he tried to honor donors' wishes and sent consent forms to researchers when asked.

“It is my belief that we did what we could to honor the donors' consent as we understood it,” he told a judge. Gore noted that the for-profit body-donation industry had “no formal regulations to look to for guidance.”

“I believe that many times I was simply overwhelmed and I tried to do the right thing but often did not,” he said.