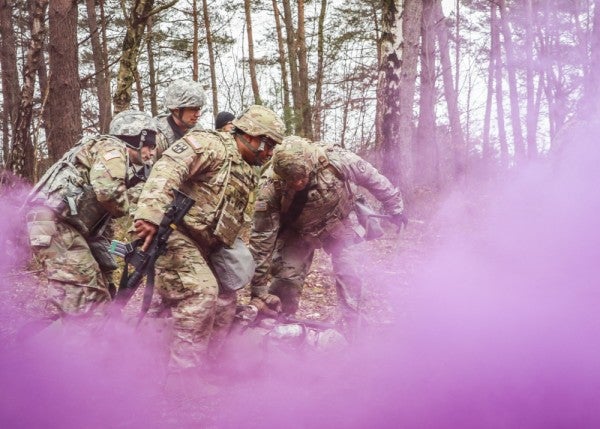 After thousands of Army retirees responded to a voluntary recall request for those in health care fields to help the service fight the spread of the novel coronavirus, officials quietly issued another call-out — this one to recently separated troops in the Individual Ready Reserve.

On March 29, the Army's Human Resources Command sent messages to nearly 10,000 soldiers in the IRR asking for volunteers to put the uniform back on, Lt. Col. Emanuel OrtizCruz, an Army spokesman, confirmed to Military.com.

The messages went out to those who had served in military occupational specialties including family nurse practitioner; critical care nursing; emergency nursing; nurse anesthetists; generalist nurse; and respiratory specialist, he said.

The newest voluntary recall request was issued just days after President Donald Trump issued an executive order authorizing the military services to recall members of the Selected Reserve and the IRR to active duty in light of the strain the global pandemic is placing on the force.

While each service has slightly different IRR parameters and requirements, troops typically join the IRR for a period of four or five years following the conclusion of their active-duty service. A service member may have a contract that stipulates four years on active duty, but a total mandatory service obligation of eight years; the balance of that service is completed in the IRR. Troops in the IRR receive no pay and don't need to drill, but may participate in periodic muster events — and they must remain ready for the possibility of involuntary recall by presidential order.

The Army, however, is beginning by soliciting as many volunteers as it can to meet medical provider gaps created as a result of deploying mobile field hospitals to urban regions in the U.S. hardest hit by the virus.

“The U.S. Army is reaching out to gauge the interest of IRR Soldiers who would be willing to assist with COVID-19 pandemic response efforts should their skills and expertise be required,” OrtizCruz said.

It's not clear how many soldiers the Army needs to fill its staffing gaps and whether it will be able to meet the need with a voluntary recall alone. To date, the service has ordered the deployment of three mobile field hospitals — each staffed with about 330 soldiers — to New York City and Seattle.

Officials are still processing waves of volunteer responses from a call-out to 800,000 Army retirees from medical fields. OrtizCruz told Military.com on Monday that the service had received some 17,000 responses.

Human Resources Command, he said, is still processing and validating requests, and sorting them by specialty. It's not immediately clear how long it will be before the first volunteers can re-don their uniforms. Lt. Gen. Raymond Scott Dingle, the surgeon general of the Army, told reporters last week that the first step for the service would be to ensure that all volunteer qualifications and certifications are valid and up to date.

“Then once we do that, we will plug them into all of our medical treatment facilities as required in support of the mission,” he said.