A soldier’s wife went to her Army chaplain after a rabbi sent her explicit messages. She says he harassed her instead

An Army investigation obtained by The Seattle Times found that Army Chaplain Capt. Michael Harari shared an Army spouse's allegations of sexual harassment with the accused before working in parallel to "harass and attempt to intimidate and ostracize [the couple] from the civilian communities surrounding JBLM [Joint Base Lewis-McChord]" 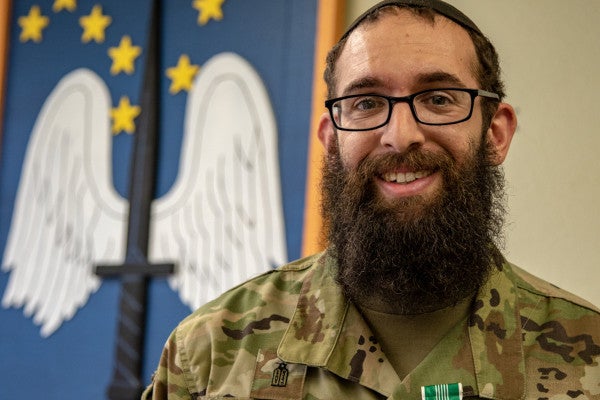 When Traci Moran, an observant Jewish woman living at Joint Base Lewis-McChord with her enlisted husband, came to Army Chaplain Capt. Michael Harari in August 2018, she was looking for spiritual guidance, she said.

A Tacoma rabbi, Zalman Heber, had been sending her sexually explicit text and voice messages for almost a month despite Moran asking more than once that he stop, the messages showed.

Harari was her husband's unit chaplain — meaning he was responsible for the spiritual well-being of the unit's families — and the only rabbi on base. And he and Heber were part of the same Hasidic organization, Chabad, that runs synagogues and cultural centers around the world.

All of that meant, Moran said, that Harari was “in an incredibly unique position to take my report and tailor counseling to my specific religious views.”

Instead, an Army investigation obtained by The Seattle Times found that Harari violated her confidence by sharing her allegations with Heber. Then, Heber and Harari worked in parallel to “harass and attempt to intimidate and ostracize the Morans from the civilian communities surrounding JBLM [Joint Base Lewis-McChord],” according to the investigation, which examined whether Harari violated the Army's Equal Opportunity policy.

Harari did not respond to a request for comment, but in a memo submitted to the investigation said the Morans “verbally assaulted” and “slandered” him and his wife. A representative of Harari's endorsement agency, the organization that confirms he is capable of carrying out his religious duties on base, denied “any linkage between Harari and Heber.”

Meanwhile, Moran said she has lost faith in both Jewish and military institutions.

“I have been victimized twice,” Moran wrote this month in an official complaint to the Army about what she says is the base command's inadequate response to Harari's actions. “First, by the rabbi [Heber] who sexually harassed me, and then by the chaplaincy of JBLM.”

When Moran, who had recently moved to the Pacific Northwest from Fort Bragg, North Carolina, went to pick up a shipment of kosher food at Rabbi Heber's house in July 2018, she said she sought to make a connection by telling him about the community activities she'd previously led.

Heber then began messaging her, and she messaged back. Almost immediately, though, the exchange became full of what Moran, in one plea to Heber to stop messaging her, called “TMI — too much information.”

The explicit messages, a selection of which The Seattle Times reviewed, included Heber describing sexual acts with his wife.

“I really don't want to know about your personal life with ,” Moran replied at one point.

On Aug. 12, 2018, Moran and her husband, Staff Sgt. Jared Moran, sought rabbinical guidance by taking the messages to Harari, according to the Army investigation.

“CPT Harari assured us he would not repeat the information to anyone as he was bound as a chaplain not to,” Moran testified in her sworn statement.

Instead, the Army investigation found that Harari relayed her allegations to Heber and that the two rabbis “aligned” their actions against the Morans.

In an interview, Heber said he advised members of his congregation to stay away from the Morans because he “felt personally threatened” by “slander” Moran was spreading about him.

At an official garrison Hanukkah party, Harari pulled Jared Moran aside and told him the garrison commander had banned him from the gathering because the Morans represented “safety concerns,” Traci Moran testified. That was followed by an email the next day, Dec. 3, where Harari reiterated that the Morans were banned from Jewish events.

“Jared Moran has sent me multiple harassing texts in regards to the offensive, false, allegations his wife has spread against me,” Heber wrote.

The Army investigator found “a preponderance of evidence” that the Morans were not safety concerns, but the subsequent review of the investigation deemed that irrelevant.

Being excluded from Jewish services was wrenching for Moran, whose father died Jan. 17, she said. Moran said she paid a stand-in to attend daily services on her behalf and recite the mourning prayers for her, while she prayed alone in her house on base.

Because of Harari and Heber's actions, “I am unwelcome in any nearby synagogue,” Moran testified in early July. “This makes it impossible for me to worship.”

In January, three members of the Tacoma Hasidic community confronted Heber about inappropriate messages he had sent to Moran and, they allege, three other Jewish women.

“He took it very hard,” said Kent, one of the men who confronted Heber. Heber “got irate and wasn't willing to talk at all … He ended up handing his wife his keys, his wallet and his phone and said that there would be blood on our hands,” said Kent, who called police.

Heber said he was “very distressed” but denies threatening self-harm. He went on leave after a religious council organized by Chabad leaders investigated the women's claims.

“You have saved Hebers life,” Issaquah Rabbi Shalom Dovber Farkash, who sat on the council, wrote in a WhatsApp message to Kent. “If you wouldn't expose him as you did who knows where he would of ended up …”

The messages, provided by Kent to The Seattle Times, show Farkash promised to act “harshly” by removing Heber from his position as rabbi and ensuring that Heber receives “intense therapy” under rabbinical supervision.

Farkash, reached by phone, declined to comment. Both he and Rabbi Sholom Ber Levitin, the leader of Chabad of Seattle, referred The Seattle Times to Heber's attorney, Barry Wallis, who would not confirm whether he also represented Levitin, Farkash or the regional Chabad organization.

Wallis confirmed Heber was in counseling, saying it was for “severe grief” following the death of his mother.

Farkash's texts also said Heber would be “reaching out to all victims to ask forgiveness.” But that hasn't happened, Moran said.

The ordeal has perturbed some of Heber's congregants. Mark Friedman, who was among those who confronted Heber in January, said he has stopped attending services at the Chabad center.

“I can't bring myself to call him rabbi,” said Friedman.

But others, pointing to the fact that Heber has received counseling, said bygones should be bygones.

“Ultimately, the community made a decision that they wanted Rabbi Heber to continue if he was able,” said Donna Fischer, who's worshipped with Heber since the early 2000s and described him as “super caring.” “I don't know why this is coming up now. To me, it's very upsetting.”

Heber said that by attacking him, Moran was attacking Orthodox Judaism.

“I am a dedicated servant,” he said in an interview. “A father, first and foremost. A dedicated husband to my wife. A dedicated member of my community. I am not going to allow a woman to destroy my life based on false allegations.”

Harari was not disciplined as a result of the investigation because the Army found that his actions did not violate its Equal Opportunity policy. The investigation found that banning the Morans from the chapel was the result of personal disagreements, not an antipathy toward the couple's faith.

An appeal by Moran was denied in February, records show.

The Army is still investigating whether Harari “violated confidentiality, exceeded his authority by implementing a bar to JBLM facilities and services, and made false official statements,” according to the appeal denial. A general is “considering whether to file a reprimand” pursuant to that investigation, according to Harari's endorsement agency.

On March 1, three months after Moran said she was banned from the chapel, garrison commander Col. Nicole Lucas sent Moran a letter confirming the Morans were not banned from attending religious services. Coming after the death of her father, it was too little, too late, Moran said.

Moran is also frustrated that, she said, the base's leadership seemed to tacitly support Harari's actions. Col. Randy Brandt, the base's top chaplain, was copied on Harari's email banning the Morans from Jewish activities on base, and the investigation found that Brandt advised Harari to add Brandt's contact information to the email.

The Army investigated whether Brandt “exceeded his authority by advising CH (CPT) Harari to implement a bar to JBLM services,” according to the appeal denial. Brandt received a letter of reprimand.

“The Army failed her,” said Mikey Weinstein, president of the Military Religious Freedom Foundation, which highlights cases of what it says is religious overreach in the military and is helping advocate for Moran.

A spokesperson for Joint Base Lewis-McChord declined to comment.

“All of Mrs. Moran's allegations over which the U.S. Army has jurisdiction have either been investigated or are currently under investigation,” the spokesperson said in a statement.

Harari continues to serve as a chaplain on the base.

Heber resumed his duties at the synagogue last month.