Army Chief Of Staff: A ‘Significant Amount’ Of Crime Data Has Not Been Relayed To FBI

The Army has failed in a “significant amount” of cases to report soldiers’ criminal records to the FBI for entry... 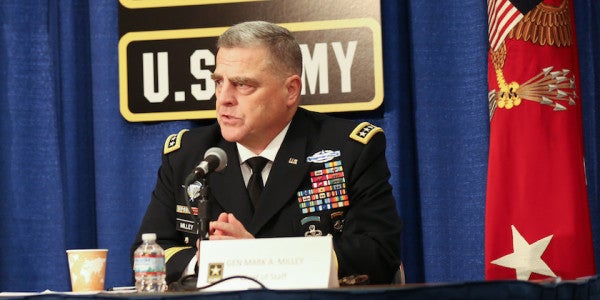 The Army has failed in a “significant amount” of cases to report soldiers’ criminal records to the FBI for entry into the federal database for firearms-related background checks, the service’s top general announced on Nov 15, signaling that the problem extends well beyond the case of Air Force veteran Devin P. Kelley, the former airman with a history of criminal behavior who massacred 26 people at a Texas church on Nov. 5.

Army Chief of Staff Gen. Mark Milley acknowledged to reporters at the Pentagon on Nov. 15 that the Army’s system for alerting the FBI to soldiers’ criminal convictions and registering their data in the National Instant Criminal Back Check System (NICS) is flawed, estimating that the number of cases that have gone unreported is “probably in the 10 to 20 percent” range, according to the Associated Press.

“It’s not just an Air Force problem,” Milley said, referring to recent revelations that Texas shooter Kelley was able to purchase firearms from licensed vendors after the branch failed to notify the FBI of a 2012 domestic assault conviction should have barred him under federal law from acquiring firearms in any way.

Kelley had been sentenced to 12 months confinement for brutally beating his wife and step-son; following his initial court-martial, he escaped from a mental health facility in El Paso, from which he escaped in 2012. The officers who found Kelley described him as a “danger to himself and others.” But none of these incidents prevented Kelley from purchasing four guns, including a Ruger AR-15 variant dubbed the AR-556, after his bad conduct discharge in 2014.

The day after the shooting, the Air Force admitted its failure to report Kelley’s court-martial to the FBI, while Secretary of Defense James Mattis ordered the Pentagon’s inspector general to conduct a joint review with the Air Force of how the service had handled Kelley’s criminal records. The Pentagon said in a statement that the IG would “also review relevant policies and procedures to ensure records from other cases across DoD have been reported correctly.”

Milley’s announcement begins to sheds light on the scope of the problem, which he said spans “across all the services where we have gaps in reporting criminal activity of people in service.” The gaps have existed for quite some time: In 1997, A DoD inspector general report  found that the Air Force failed to alert the FBI to 50% of criminal cases. The Army’s track record was much worse: the service had not reported 79% of soldiers’ criminal records to the FBI.

As the Associated Press notes, Milley did not specify the types or number of criminal cases that the Army has not relayed to the FBI for inclusion in the NICBCS database. (A 2015 followup to the 1997 compliance report did not include new Army data, citing “data valuation limitations.”)

But Milley admitted that “the percentage is too high” and required attention. “There are gaps and failures on our part to report in to the FBI,” he said. “We have a significant amount of omissions. It clearly tells us that we need to tighten up.”